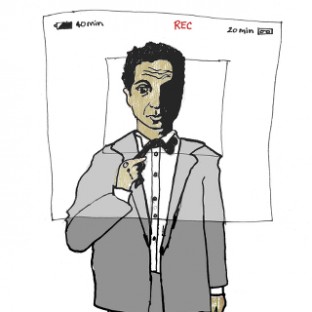 @Pandurevich It was taken down by Vimeo and YouTube because of legal threats but it's still happening and can be wa… https://t.co/pDCDUV7W07

Caveh Zahedi recalls his encounters with the legendary director of Two Lane Blacktop, who passed away last week at the age of 91.
The breakthrough creator-star of How To With John Wilson has a socially distanced chat with his friend and fellow documentary innovator.
Filmmaker Caveh Zahedi looks back on his encounters with the late director of The Atomic Café and Harvard Beats Yale 29-29.
Caveh Zahedi looks back on his friendship with the all-time great documentary filmmaker, who passed away last week.
With the help of his 10-year-old son, Caveh Zahedi takes a sideways look at Marvel's latest record-breaking epic.
To celebrate the release of his new film, Korine sits down with a fellow cinematic iconoclast he used to call up at 3 a.m. It’s a trip!
Caveh Zahedi looks back on his interactions with the late great Iranian director, including a creative collaboration that never came to fruition.
It's no fun to read a major critic tear down your vision, but it's sometimes a different matter when the writer is a trolling internet commenter...
In bed with a cup of tea, having lunch or stifling a sneeze, Talkhouse Film contributors share their Sundance picks from Park City and beyond.
Memories of seeing Bowie mesmerizingly otherworldly in '72, disappointingly human 20 years on, and finally as a glorious, drug-induced deity.
A box set containing more than 20 years of films by one of the most idiosyncratic and original voices in cinema. Where on earth do you start?
In 1980s Paris, a young filmmaker meets one of the giants of world cinema (who asks him to please shut the door on his way out).
Two weeks ago, I received an email asking me if I would be interested in writing about Lars von Trier’s Nymphomaniac...