A few weeks ago, my youngest cousin asked me how my summer vacation was going. “I stopped having those a while ago,” I told her. But really, working full time as a touring musician is sort of a permanent summer vacation in its aimlessness. It’s a whole lot of road-tripping and are-we-there-yet-ing. Friendships and romances made on the road can be intense and fleeting, like a tweenage summer fling. I’m mostly answerable to my own whims, a lot of which lead towards sitting around. Not many lead towards magic.

And yet I have so many distinct, imagistic memories of summer I wish I could recreate with this ample downtime of adult permanent vacation. Some are kitschy — like shoveling down unconscionable quantities of Lunchables while marathon-watching Scooby Doo. Others are more surreal. In a vernal pool outside of my mom’s house, I dipped my little net and caught a salamander I named Red, which I housed in a terrarium for weeks until my stepbrother set him crawling on top of a chessboard. From there, Red slithered away for good. My last memory of the reptile is watching it sinuate over a white pawn.

I miss the mystical qualities of childhood’s summer ether. I mean, it’s been years since I walked into the woods and saw something truly crazy — like in middle school, when I stumbled upon an elaborate, fully formed fort, which my friends and I colloquially referred to as “The Cult Hole.” My permanent vacation is fun — certainly more fun than the adult summers when I had regular office work, I know that — but it is not wonderful or childlike. Where are the Cult Holes?

The closest I’ve felt to discovering a Cult Hole all summer is listening to this band Melkbelly, a Chicago four-piece. The A-side of their latest seven-inch, “Bathroom at the Beach,” is short and catchy, but it has this magical arbitrariness in which anything can happen, calm or wild. While I have the strong suspicion that every hook in this tune was deliberately crafted by evil genius musicians, it has a stumbled-upon, lackadaisical sheen — like writing a poem because each line surprises you more than the last, and not because you had to do it for homework, y’know?

The song’s biggest refrain, which seems to differ in timing and phrasing each time it appears, involves various iterations of singer-guitarist Miranda Winters wailing, “Get it over with, telling me it’s terrible.” The line splays out madly over scales, both ascending and descending, which skip notes and then hopscotch up and back down to pick up those notes first missed. It sounds like a melody that could’ve been transcribed from a kid picking out a scale on a piano for the first time. At the same time, it’s a fiercely methodical earworm.

Meanwhile, blindsiding, second-long bursts of primal screaming punctuate and act as foil to Winters’ otherwise effusive and chipper singing. And these shouts are a hook in a way, too, purely for how serendipitously unbridled they sound. Winters’ lyrics themselves alternate between meandering plot and unwavering precision: “So sandy, I can’t compliment those shoes. And was it divided by a larger bathroom at the beach?” she queries, casting off some names of oceans: “Red, Dead or Atlantic.” Verse two trades summertime radness for fixin’-to-brawl threats: “Did I stutter? When it’s two in the ring, I swing,” she warns. Lightheartedness rubs up against aggression here — aggression juiced up by the song’s skewering guitars and pummeling percussion. It’s like dogs wrasslin’ a little more boisterously than you expected — are they having fun? Are they gonna be OK? The outcome is hazy, so it’s hard to stop staring.

The VHS-quality and heavily green-screened video for “Bathroom at the Beach” is utterly goofy and just as fun as the song it accompanies. It involves no less than a formal dance under a disco ball; hefty facial glitter; retro stage outfitting; over-the-top mugging; an introductory monologue mostly comprised of a list of Italian foods. Oh, and a Devo-esque dancing person with a carton of milk tied around her stomach with some rope — Melkbelly, indeed!

When I emailed Miranda to get the lyrics to this song, she prefaced those lyrics with this explanation: “Oh the bathroom at the beach, so wet and strange and full of birds. There’s a lot about it that’s like friendship too, you know what I mean?” Well, OK. She’s being silly in that explanation, I think, but my memories of childhood summer are indeed a bit like that. They’re all littered with discovering dead animals and the mutual longing to grow closer to my friends, to make the strangeness of unoccupied time just a little more strange.

So I guess Melkbelly’s written my song of the summer because it inspires me to be strange like that, to get out the face glitter and hunt for salamanders. For starters, today, I visited a striking blue peacock at a petting zoo. Later, I watched snapping turtles swim beneath my paddle boat. And next time I see my little cousin, I’ll have a more satisfactory answer for how my summer vacation is going. 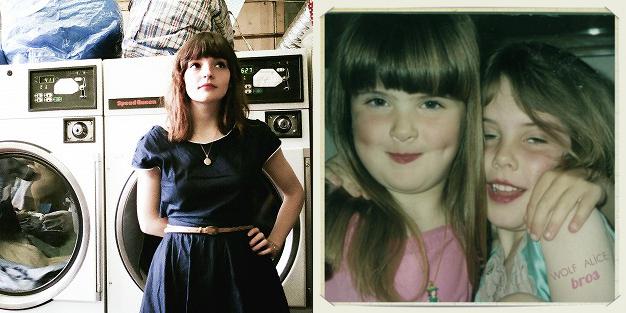