I took my five-year-old son and his fiancée. My boy is still young enough that I have not felt obligated to take him to every Pixar release, and I myself am not one of their cultist fans. In fact, I’d only seen two earlier Pixar movies, Toy Story and Wall-E, and while those were surely impressive I had always snobbishly recoiled from the apparent critical consensus that they’d somehow perfected the sorcery of storytelling. That reputation felt too Silicon Valley to me — the rigorous “quality control” culture which birthed the MacBook (upon which I currently type) doubtless makes a phenomenal product, but I’ve always desired something more than a satisfying consumer-product relationship with movies. So I let Pixar pass me by. “I’m sure it’s great,” I would tell everyone, every year, as each new movie came out.

The folks in the Pixar brain trust have always been admirably ambitious with their subject matter, but it did seem from my (admittedly ignorant) perspective like there might be a pretty firm formula in place for guiding anthropomorphized cars, planes, fish, toys, robots and monsters along their hero’s journeys. Inside Out, though, got my attention. They’re going to anthropomorphize emotion itself? Pause and consider, dear reader: that is really bonkers-level ambition. I’m sure many an acting-class exercise or sketch-comedy bit has been built on a similar premise, but how could you possibly fashion that into a mass-market feature film?

Truthfully, though, it was more than screenwriterly admiration that drew me in. I was eager to dive headlong into emotion. So much so that I started tearing up during the Disney logo. (Disney! The evil empire! But still, I thought, as they pulled back on a digital rendering of a theme-park castle, what joy this fiendish corporation has brought to generations of children!) Ninety-five minutes later, of course, my face was red and tear-streaked — I’d been through the ringer and experienced full catharsis — I felt 10 pounds lighter, relieved of my cares, washed of my sins, one with humanity … How did they do that? Well, as for the impeccable technique which has made Pixar so celebrated, there is little I can add to the critical discourse. The world was brilliantly imagined, the jokes were funny, the filmmaking was classically elegant and snazzily kinetic. Blah blah blah. But that’s not what did it, as I suspect these things could be said about a lot of movies that I couldn’t care less about.

Now, to be clear, it’s not necessarily difficult to make me cry at a movie. It happens all the time. Certain NPR stories will even moisten the ducts. But, being a dude, it is predictably quite a bit more difficult to get me to cry in “real life.” The death of a loved one will do it, and as I get older perhaps a wedding, though I can’t promise a gusher in either case. News of death brings too much shock, too much numbness for me to let it all loose. As for ordinary frustration and ordinary melancholy, those don’t come close on the tear-meter. The thing about emotions in reality, I find, is that they are so very confusing. There’s just too much going on, too fast, all reverberating off of each other. Real emotion is like slamming your arm down across a piano keyboard — too many notes, never just a nice, clear chord as it is in the movies. This is part of why we go, for that clarity.

Or so I tell myself. A less charitable view might be that cinephilia is on the mild end of the autism spectrum and that movies tend to attract people who have no idea how to handle their own feelings. Certainly this has been suggested to me.

And this, you see, was why I was so happily wrecked by Inside Out. I cried because the story hooked me, but also from a kind of guilt. This is all true! I thought. This is what my wife keeps telling me! The movie’s charming little adventure begins when the manifestation of a confused pre-adolescent girl’s Joy panics at no longer being able to contain the girl’s Sadness, and inadvertently wreaks havoc on the entire emotional system. Though well-intentioned and charming, Joy is arguably the secret villain of the movie. And indeed Joy is the one who must learn to accept Sadness — Sadness, so far as I recall, doesn’t learn a damned thing. Despite Sadness being a drag and often casually destructive, we understand that it is necessary in our lives and can, oddly, be a friend … Yes, this all resonated, big time. Had I denied sadness for decades by allowing myself to believe I could only truly engage with it in the safe space of a movie theater? How many real-life opportunities for intense emotion had I missed because I found them too baffling, too uncinematic? Would I be a better husband, a better father — and let’s get selfish here for a second, a better artist — if I were not so even-keeled a dude?

I have no clue! After all, the movie was only preaching acceptance of emotions, not allowing them to run amok, right? I needn’t feel guilty about not being, say, bipolar, should I? I may never produce Kerouacian poetry but surely my even temper had brought me much with which to be pleased in this life, no? But, boy, did it feel good to cry during Inside Out. And naturally I was very proud of myself. I felt like I was setting a good example for the kids. I believed I was really in touch. Then we walked out and I realized that it had just been another movie. And that I’d also cried during Magic Mike XXL (tears of gratitude!). 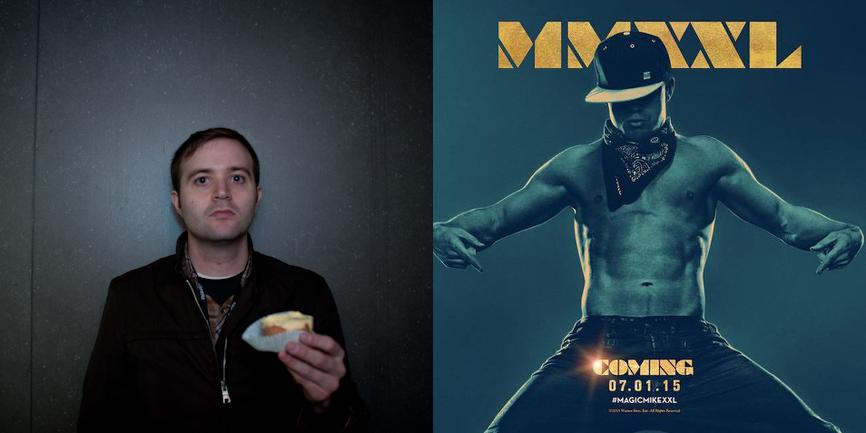