“Why do the planes not need people to fly them?” asked my four-year-old son as we walked up the aisle after watching Planes: Fire & Rescue. I was proud of him. I hadn’t explained The Pixar Theory to him yet, but he was struck by some of the issues it addresses all on his own. Some of the funniest writing about both Planes films has seized on that theory, or at least mused on the bizarre, seemingly post-human world they take place in.

I’m looking forward to the PLANES prequel explaining the supervirus that allowed the planes to wipe out humanity.

“…how thrilling to muse that maybe instead it’s the raw material—not the motors—that are alive, and the iron ore destined to be forged into these Planes and Cars has been self-aware since it was burped from a volcano. And that, with regular oiling, it may live on for millennia, perhaps even bearing witness to the collapse of the sun.” Amy Nicholson, on Planes, LA Weekly

My incomplete understanding of this interpretive theory is that all the Pixar films are interconnected (and though Planes is, technically speaking, a Disney production, it has been explicitly presented as being part of the Cars universe) and that from Brave through Toy Story to A Bug’s Life and ultimately Monsters, Inc. (the sequence the theory posits as chronological) they chart the rise of sentient inanimate objects and their inheriting of the Earth after its abandonment by humans. The Cars/Planes films are, therefore, not “contemporary” but are actually set about 100 to 200 years in the future and the characters are, I’m guessing, re-enacting human-designed sports competitions and other relics of the ancient past (including crop dusting and line dancing) as some sort of cargo cult.

There’s certainly evidence for that kind of thing in Planes: Fire & Rescue; most striking is the absolute lack of any animal life whatsoever. I didn’t notice any flowers so it may be possible that plant life is restricted to those that don’t need insect-aided pollination. I was startled at one point to see a bird’s nest, but it proved to be home to a family of bird-like balsa wood and rubber band planes.

Still, I imagine all of us watch films through different filters simultaneously, and even as the wise-ass in me zeroed in on that stuff, I was at the time genuinely feeling great seeing the movie with my kid. Last year, Planes was the first movie I took him to in a theater and we had a ball; halfway through, he rushed up to the front row and we happily watched the whole thing with our necks craned straight up. It’s going to take electroconvulsive therapy to break the link between positive feelings and Planes imagery for me.

And to tell the truth, I maybe enjoyed Planes: Fire & Rescue even more. First off, it was just, you know, better; I liked its firefighting angle more than the original’s racing, and on the state-of-the-art screen at Pasadena’s Arclight, it was a soaring, visceral experience. Some of it was kind of overwhelming for my little guy but it was nice to watch the whole thing with him on my lap – once the horror of Dusty Crophopper’s high-altitude engine failure during the first act drove him out of his own seat. He’s growing up fast and I felt somewhat melancholy realizing I won’t have both my arms around him at the 2022 Paul Verhoeven retrospective at the New Beverly.

My own father was visiting from Florida and was watching with us, and I got a little choked up thinking of all the movies I saw with him growing up (everything from Death Wish II to Saturn 3) and how they helped shape my sensibility. In fact, in elementary school I won a pair of tickets to Woody Allen’s Interiors on public radio and he drove us out to the Orson Welles Cinema in Boston where we watched a depressed older woman attempt suicide by sealing shut with packing tape all the windows and doors in her apartment before turning on her gas stove.

My folks live in Florida so the three of us together is a rarity. This was the first time we had gotten to watch a movie together and I was really trying to savor it when Planes: Fire & Rescue pulled out its trump card (assuming its goal was to keep me, and especially me, strongly engaged). The last third of the film concerns a remote luxury hotel for cars and planes (“The Grand Fusel Lodge”) threatened by an approaching forest fire, and this place was eerily similar to THE OVERLOOK HOTEL from The Shining. I’ve spent the better part of three years thinking about Kubrick’s movie and I’m trying to move on but, like many other of the Overlook’s guests, I just can’t seem to leave.

Note: I just deleted a convoluted paragraph where I compared and contrasted the iterations of the Overlook with Planes’ Grand Fusel Lodge and the many “real” hotels which inspired each. You’ll be glad it’s gone, but here’s a picture. 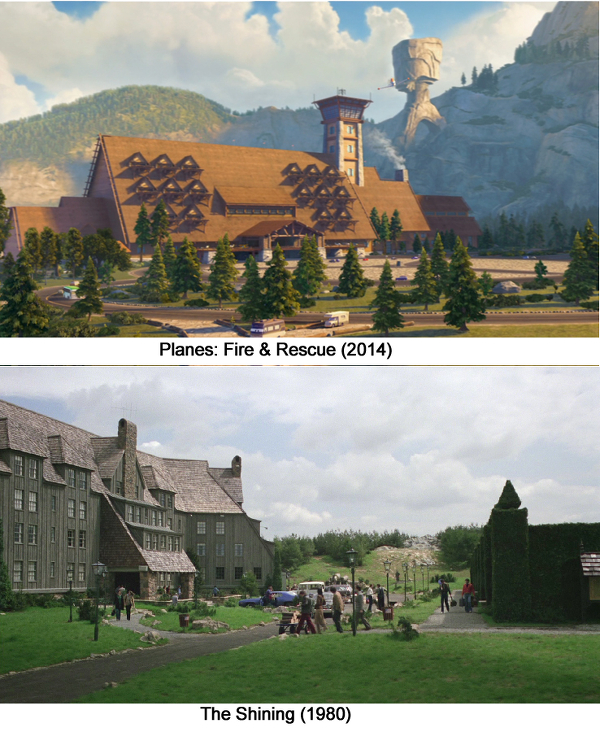 This fire-threatened forest is actually the tableau that suffered the most from this world’s lack of animal life. Dusty and his team make do rescuing an endless line of cars and a pair of elderly RVs on winding mountain roads (a cynical SUV delayed the evacuation of the big party at the hotel) but the suspense – and there is some real suspense – might have been amped up if there were lovable, animated raccoons, bears or mountain lions running from the flames.

Maybe that was just as well though, the final fire scene was still a respectably apocalyptic hellscape and, after surviving it, the four year old was pretty spent, falling asleep during the drive back. 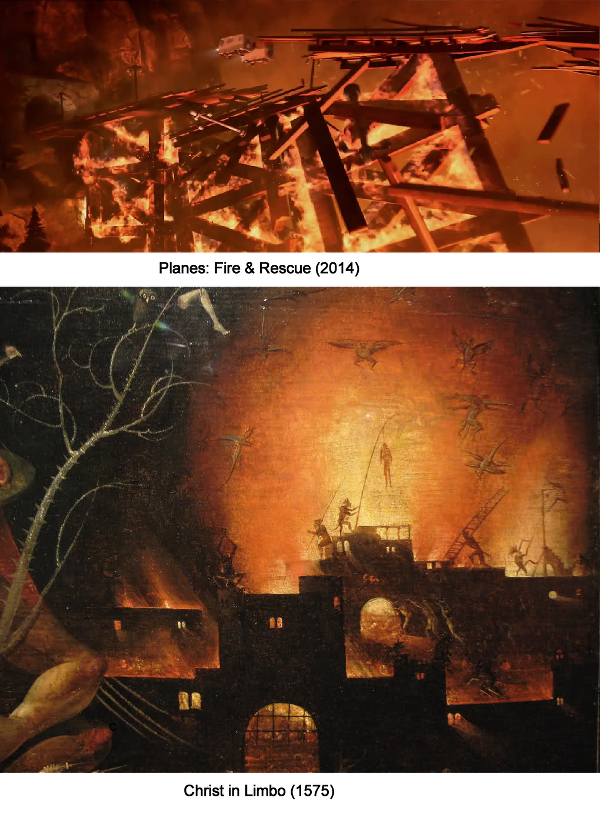 When we got back home, I wanted to show off my 3D television to my father so I loaded up my Dredd Blu-ray and the two of us got to bask in the kind of exuberantly lurid bloodbath we haven’t enjoyed together for well over a decade.

Epilogue: We caught the four year old secretly peeking at Dredd’s final massacre from the stairway after he silently snuck out of bed and down the stairs. His mom gently took him back to his room and my dad and I turned back to gawk at Ma-Ma’s exquisitely photographed, perversely sensual 200-story slo-mo plunge through a plate glass window down towards the concrete floor of the Peach Trees mega-block in the heart of Sector 13. 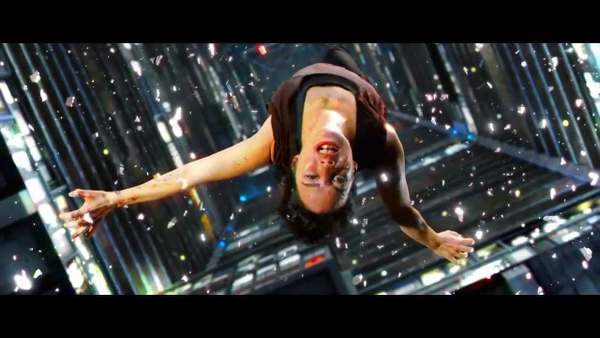