Growing up, I had recurring nightmares that my father was dying. Most of them involved him falling and me catching him, trying to save him before a dramatic final moment, or begging with a threatening grim reaper type figure to take me instead. I had nightmares in which I was standing in front of a full church giving a eulogy for him. And in all of these dreams I was still a young person.

The realization that my father would die came at a very young age for me, and I knew it would happen much sooner than anybody else’s parents I knew. I mourned my father my entire childhood. I prepared myself for his death from a young age.

Because my father was 63 when I was born, I watched the man I knew or thought I knew quickly fade. I saw the inevitability of age, and the losing battle one fights with time. The same hands that confidently commanded the piano keys when I was a kid began to stumble from undiagnosed Parkinson’s when I was a teenager. I observed his black caterpillar eyebrows that furrowed through fingerprint-covered glasses, reading sheet music, turning completely white before I reached high school. My father was transforming, and none of it went unnoticed by me. Many nights I heard my dad pound the keys after fumbling on scales and arpeggios, followed by the loud click of the light shutting off, and the rough sound of the piano bench sliding into place, as he gave up.

The only times I got to know my father were when we were completely alone, particularly side by side on the piano bench, or at the dinner table, after everybody else had finished their meals and moved on. Piano lessons with my father are vivid in my memory. His entire life, decades of his existence before I came to be, were evident in the wrinkles and creases in his forehead, in the age spots on his hands, the scars from freakish accidents he was lucky to survive. And all of it was a story for me, carefully crafted, recited similarly each time he chose to tell one.

Lessons would often slowly evolve into “story time” with Dad, and he would regale me with his experiences in World War II, the many houses he lived in when he was young, moving constantly during the Great Depression, and more tales I came to know by heart. Afterward, I’d always get a gold star sticker on my sheet music for doing a good job, and in turn, for being a good daughter.

I’m still processing what it was like to have an older father, and my debut feature, Gold Star, is an exercise in that, in what it’s like to mourn someone before they’re gone, the waves of denial that pulse through you before you fully understand what death even is. I have many friends who lost parents in a variety of ways, some tragic and unexpected, others more drawn out. No matter what, it’s horrible. But sometimes I feel completely isolated by my experience.

Most of my friends now have parents that are right around the age my father was when I was born, and it sometimes makes me feel bitter. They are starting to see the health problems creep in that I was far too familiar with from a young age – a heart surgery or two, a sudden fall for no reason, memory problems, mood swings, blood tests, brain tests, so many tests, and little things and big things that come with growing old.

I made a film with a female protagonist (who I also play) who is angry at the world and lashes out as her father is dying. She doesn’t want to care for him; rather, she wants to run away. She wants to be free to mess up and make mistakes. I feel as though the choice to make a character much different than how I interacted with my father in the last year of his life was a way to vent the deep frustrations that came with the pressure to be perfect for my family. Always needing those gold star stickers, wanting to make everyone happy, and if everyone was happy, everybody would also be OK. I never felt like I had room to mess up, I never had any crazy stories from my youth. I did everything right. I sat out when other kids played Truth or Dare. I was given a time out just once. As I grew up, the more I tried to separate from my family in order to find myself, the more I was drawn back to them as my father’s health started to deteriorate.

In a way, I didn’t feel truly free to figure out who I was until my father passed away. I was always defined by him and I’m still allowing myself to be. Everyone in school knew my family, “Oh, the Negris. They have the old dad and the young mom.” I may have forgotten many of my teachers’ names, but there’s not one that has forgotten mine. I had a screening of my film in my hometown of Orange, Connecticut, a few weeks ago, and teachers I had as a child approached me with huge smiles: “Vicki, I thought you were going to be a musician.”

I played piano prodigiously for about over a decade, performing in talent shows, practicing at home with my dad. I didn’t love it. I wanted to write music, I wanted to play things other than Chopin. I wanted to find my own voice. Sometimes I worry that I stopped pursuing piano when it could’ve been the thing I was greatest at. I couldn’t sit at a piano bench for a full year after my father passed away. I almost forgot how to play without him.

My father wanted so desperately to leave behind “gifts” that had nothing to do with material possessions. I understood my father’s need for others, particularly his children, to know his life, and wanted to know it as badly as he felt the constant need to share it, even though he only gave us a small glimpse into it in full.

In retrospect, I feel cheated. I wish I knew more. I wish our conversations were less of a one-way street. I couldn’t relate to his experiences at such a young age in the way I might be able to now, in a way that would allow me to return with questions and challenge his choices as an adult.

I didn’t get to see my father figure himself out or make mistakes or grow old. He had done all of these things by the time I came to be. For him, and for my childhood, it was about making sure he wasn’t forgotten.

Lately, though, I feel as if I’ve lost the only person in the world that truly understood me, not because of what we said to each other, but because of our desire to leave behind a legacy of the story of our lives.

In making my first feature, I feel as if I’ve left a small piece of me behind, a piece of me that is hidden, the piece that’s resentful, that wishes for a time machine and a more conventional upbringing.

I feel as though I’m my father, asking you to sit with me and listen to my story. I’ve responded to audience members in oblique ways about what’s accurate in the film, in general ways about my relationship with my father, and more.

The truth is, I don’t know how accurate the film is once you cut beneath the scenes, tiny moments and dialogue that I pulled from real life. I don’t know how accurate my protagonist’s rebellion is to my own desire to run away from familial obligations, or if I created a character very different from myself simply for the film’s dramatic tension, to fight against the role of woman as a caregiver, as a mother, a daughter, somebody who has to be there for her family.

I’m still figuring it out. All I can say is, Gold Star is me in every way. Maybe I’m exactly like my father, and maybe I’m nothing like him. What’s terrifying to me is, I feel like I never knew him. I feel as though he never existed because now he’s just a story with an ending.

My first film is becoming more and more difficult for me to watch and talk about, because I realize I feel no different from when I made it.

Deep down, I still feel trapped inside myself. I wonder if when it’s over and I’ll no longer have to incessantly promote and spread the word about this film nonstop, if I’ll finally be set free. Until then, I’ll wonder if my voice is truly my own, or whether my father is speaking through me. 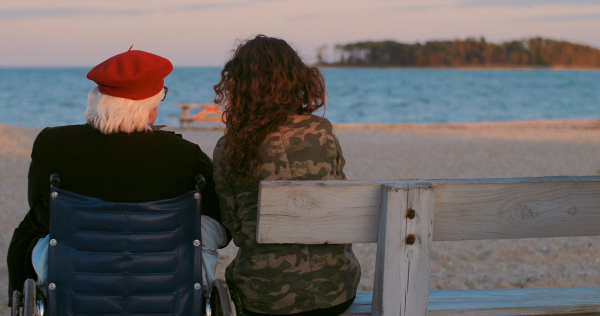