I’ve been thinking a lot recently about interviewees, as in the past year three of the people I talked to for my movie The Phantom have become sick or died.

We are so fortunate to have known them. So lucky to have been able to make the film at all, catching a generation of Texans just in time to expose a massive miscarriage of justice.

The relationship between a documentarian and their interviewees is the black box of documentary filmmaking. Nobody wants to come clean on what really goes on between director and subject, because boy, can it go wrong!

There was the rough cut screening during which an English duke stuck his face three inches from mine and screamed, “You are treating me worse than a murderer!”

My crime was to have filmed the moment his sports car stalled during a race. (He owned the race track.) After much huffing, many snarky comments about how “common” I was, and a few sotto voce threats about lawyers’ letters, His Grace eventually stood down.

He was better than the British cop who tried to close down an entire TV station. We had been filming with him for years, as he investigated an arson attack. His main technique was to arrest suspects without a shred of evidence. It did not work; everyone walked free.

But when we showed this on screen, he ran sobbing from the viewing room, shouting that he had never met a bigger bastard. The next day, the writs arrived. And Channel 4 in the U.K. had to spend big bucks fighting off the threat.

Then there are the interviewees who you simply cannot interview. I don’t mean the ones who don’t agree to talk to you. Rather those who do, then make a total fool of you, and walk away having given the interview they wanted to give all along.

Hello Boris Johnson, premier of Great Britain. I’ve interviewed him three times. Each time, I managed to ask only the most basic of questions. Each time, he happily evaded them, and gave the answer to the question he wished I had asked. It is not for nothing that his press nickname is the “greased piglet,” as he wriggles free of disaster again and again.

But then there are the dream interviewees, who come along when you least expect it. One rainy evening in Corpus Christi, Texas, I was filming a police officer reliving the arrest of Carlos DeLuna, the man whose execution is the centerpiece of The Phantom.

As the cop talked, a guy tapped my producer on the shoulder and said, “I was there that night. I saw both men run.” And with that, we uncovered the final piece of evidence that solved a 30-year mystery, proved DeLuna innocent, and called the entire death penalty into question.

Raymond Nunez had been inside his house on the night of the murder, watching TV. He had seen everything unfold in the wake of Wanda Lopez’s bloody murder. The cops never thought to talk to him. My luck was that 30 years on, he was itching to tell his story.

Not only was Raymond one of the most unexpected and significant interviewees I have ever come across, he was also one of the most patient. This burly hospital porter bore our repeated questioning, our prying into every aspect of his life, with a lot more grace than my entitled English aristocrat. And guess what? His story checked out in every last detail.

However, all this is about a duty of care to the filmgoer, about ensuring my film is telling the truth. What about my responsibility to the interviewee?

I have never felt that burden more acutely than when filming Rene Rodriguez, the lawyer for Wanda Lopez’s family.

Trying to persuade people to talk on camera about a 30-year-old murder was not easy. The fact that a former Supreme Court justice had said the case called capital punishment into serious question, that reputations and careers were on the line, made it nearly impossible.

As door after door slammed shut in Corpus Christi, I rang Rene. He had been the first person to uncover serious police malpractice in the case – a cache of undisclosed photos from the crime scene, photos showing cops trampling over the bloody evidence, utterly contaminating the scene.

As I stumbled over my usual explanation, “Big case. Important issues,” he cut in, “Come over at four. Let’s have a beer.” An hour later, he said, “You’re alright for a stuck-up limey. OK, let’s get this thing to happen. It is important.”

With that, he picked up the phone to the District Attorney’s office, and told them, “This guy’s alright. You should help him.” The D.A. rang the Corpus Christi police chief, and said the same thing. The police chief told the Department to cooperate with me. And so it went on, until everybody connected with the case – attorneys, family, cops, Rene – had agreed to break a 30-year silence.

My dilemma then was whether it was fair to film Rene, who was evidently sick and getting sicker with every month. As we fixed up our schedule, he was insistent that he be the first to be filmed. He admitted he was going into hospital for some tests, but brushed away my concern: “You gotta have the star.”

Come the first day of shooting, I could not help noticing that his trademark ebullience had ebbed, that he seemed easily tired and, most worryingly of all, that he had an IV line under his shirt that was clearly paining him. We asked whether we should stop.

Firmly, “No.” The case was too important. For somebody who had devoted his life to exposing the appalling injustice suffered by poor Latinos in southern Texas, there was no way that he was not going to say his piece – however much it cost him.

He told me that he had late-stage cancer, and that the “damn medics” were concerned. “But what do they know?” Come April this year, it was clear he was fading fast. COVID-19 meant I could not travel from London to Corpus Christi, but the film could (even if our distributor would have had heart failure if he’d found out what we were up to, in advance of its premiere).

Rene’s family gathered round his bed to watch it with him. At the end, he cheered, having commented ceaselessly throughout. He died a month later.

Without Rene Rodriguez, The Phantom simply would not exist. Interviewing him was one of the most worrying and yet rewarding things I have ever done – exemplifying all the dilemmas of our trade.

Honor his memory, honor every interviewee – difficult dukes, crying cops, evasive pols – because without them, there would be no documentary.

Featured image shows Patrick Forbes and his producer Mark Bentley talking on the set of The Phantom. All images courtesy of Patrick Forbes. 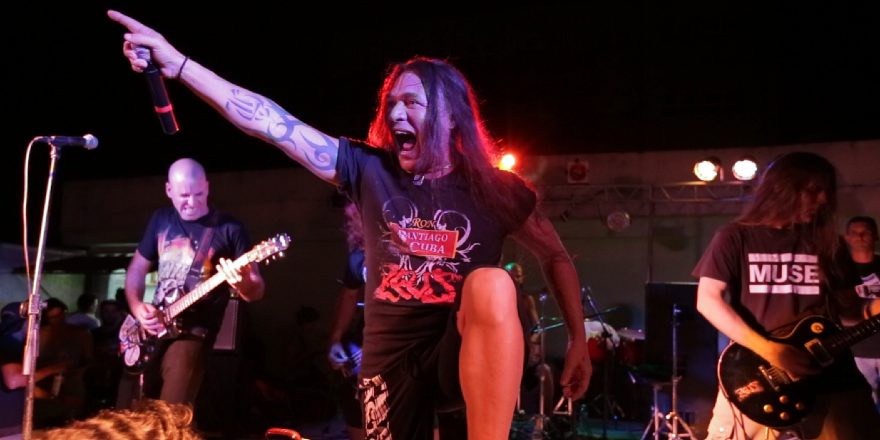