Lana Wilson is an Emmy award-winning filmmaker based in New York. Her first film, After Tiller, premiered at Sundance in 2013, and went on to win an Emmy for Best Documentary. Oscilloscope Laboratories gave the film a 50-city theatrical release, and it was nationally broadcast on PBS’s POV. Her second feature, The Departure, opens in New York at Metrograph on October 13, and in Los Angeles at the Laemmle Monica on October 20. It will expand to additional select cities shortly after that.

My new film, The Departure, is about a Japanese party boy-turned-Buddhist priest who has become famous for his remarkable approach to suicide prevention. The film captures this man – Reverend Ittetsu Nemoto – at a crossroads in his own life: with a new baby son at home, he has to make a wrenching decision between self-preservation and selflessness.

This film captures many extraordinarily intimate moments with Nemoto, both with the people he counsels and in his own personal life, and when people watch it one of the first questions they ask is, “How did you get him to trust you?”

The truth is, it all came down to one moment.

September 2014. My director of photography, Emily Topper, and translator Eri Yokoyama and I arrive in Japan for our third shoot on the film. (I don’t speak a word of Japanese, and Nemoto doesn’t speak a word of English.) We travel straight from the Tokyo airport to the temple in rural Gifu prefecture, a seven-hour journey. The moment we arrive, Nemoto announces that he’s taking us with him on a group camping trip in the mountains. We’re leaving, in fact, in 15 minutes.

When we get to the mountains, it turns out there is no cell phone reception there. This is alarming news to my D.P., a new mother. This is her first overseas trip away from her 18-month-year-old – and now her family can’t reach her in case of an emergency. Plus, we have no camping equipment with us. We learn that we will be sleeping on the floor of an open air hut, with no blankets or pillows, packed shoulder-to-shoulder among a group of Japanese women who have come on the retreat – all possibly suicidal strangers.

I also began to feel a subtle current of coldness and anger coming from Nemoto, directed at me, for reasons I can’t discern. I later find out that a couple of severely suicidal people had decided not to come on the camping trip at the last minute because of my presence. Understandably, Nemoto hated to think that the existence of a film crew would stand in the way of suicidal people getting his help. I hated to think this, too.

Because of the jet lag, neither Emily nor Eri is able or willing to stay up as late as Nemoto and the retreat participants are. I, however, am the director – which means I have to do everything possible to bond with everyone there, even though I can’t actually speak to them. I stay up until 4 a.m. every night attempting to silently “party” with them. I try my hardest to fake laugh and pretend like I’m having a good time, even though I am actually terrified that I will be made to dance alone in front of the group, something everyone starts doing in the wee hours because they’re all so free-spirited and devil-may-caring. At one point, the group starts shouting, “Dance! Dance!” at me in English until I oblige with an awkward faux-ballet routine – my worst nightmare as a sixth-grade social outcast at last realized. Then, when we film at the campsite during the days, it is both exhausting and tedious. Nemoto only seems interested in leading ridiculous-looking improv theater games nonstop – not the profound existential content I had been hoping for.

When we finally leave the campsite three days later, Nemoto realizes he has lost his cell phone at some point during the trip. He leaves me and my small crew in his car while he goes into a cell phone shop to get a replacement. Waiting for him in the car, I start to cry. I don’t know why. Partly it’s because I’m thinking about how the camping trip was not only miserably uncomfortable, but also a total waste of time, which then causes me to think about how this whole project is probably a waste of time, and how I’m more or less traveling down the road to financial ruin for a completely doomed film. I can’t talk to anyone, everyone is angry at me, I’m being forced to dance like a strange lanky puppet, and I’m running up boundless credit-card debt, without experiencing anything but confusion in the process.

My D.P. and translator are alarmed by my tears; I’m always totally focused and energized on set. They have never seen me cry before. They leave the car to take a walk and give me some space. I start to worry that Nemoto will come back and catch me crying – so in order to stop, start fixating on where he could have lost his phone. I’ve been watching him nonstop for the past three days, so feel like I should be able to figure this out.

I start looking obsessively around every inch of his car, taking out floor mats, digging in and around seats, emptying the trunk. Nemoto comes out of the shop, saying they need 10 minutes to create his new phone contract, and sees that I am extremely focused on finding his phone. My translator comes back and I start interrogating Nemoto about retracing his steps. When he mentions our mid-camping-trip expedition to the supermarket for food, I remember seeing him with his phone when we went into the store.

Nemoto suggests we drive over there since we have 10 minutes anyway. So off we go.

At the store entrance I immediately notice a massive pile of hand baskets. There are at least 500 of them. Nemoto notes that his phone case was actually the same color as those baskets: dark green. I start picking up each individual basket, shaking it, and putting it down while Nemoto, my D.P., and my translator more sensibly search the rest of the store.

Twenty minutes later, they have checked the shelves and talked to the store manager and all of the staff. No one has turned anything in. The staff say the phone couldn’t be in the baskets, because they would have noticed it while restocking them. I don’t really care, because checking each basket has given me a task to focus on to prevent myself from losing it, so I keep going. Seeing that I’m not going to stop, Nemoto says he’ll pull up his car to the entrance so that we can go back to the cell-phone shop.

He starts walking away. I remained focused on shaking each basket, listening for a possible phone. And then … I hear it! Finding it in the bottom of one of the baskets, I lift it up like some kind of holy relic. Not only is the phone case dark green, it is also basket weave pattern. At the time, in my frazzled state, this feels like a mystical symbol of synchronicity.

I run out into the parking lot, phone in hand, screaming at the top of my lungs.

Nemoto turns, sees what I’m holding, and drops to his knees, then also starts screaming, then does a bunch of elaborate bows on the pavement. Then all four of us hug and jump up and down and almost start crying from happiness. It is exhilarating. 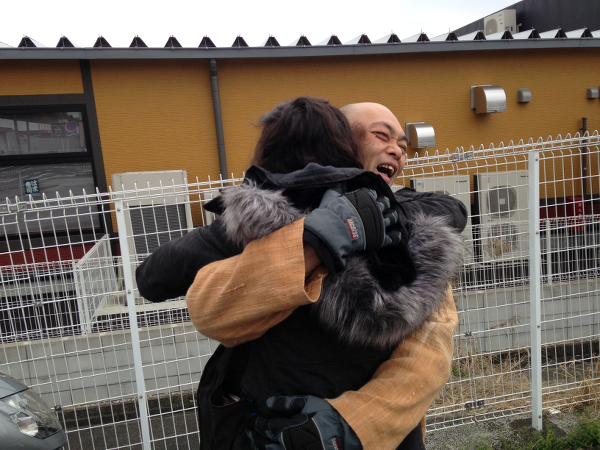 It makes me realize how random and absurd and ridiculous life is. All the chaos of the last three days immediately feels meaningless. What I’d been so sad about just minutes before is actually quite funny now. I’m giddy.

Nemoto turns on his phone and finds a text message – a suicidal former yakuza gang leader he’s known for years has been feeling really depressed. Since he couldn’t reach Nemoto, he decided to come to the train station closest to Nemoto’s temple and wait for him there. In fact, he had just been about to give up and go back home – to do God knows what – when Nemoto turned on the phone and got his text.

We race to the train station together. I feel a total allyship with Nemoto now; we seem to be racing to the train station together. When we arrive, I walk up to the Yakuza leader and announce that I’m putting a microphone on him and that we’re going to be filming him now. I think aggressively clipping a microphone to a yakuza leader’s chest might have made me nervous before, but that was in the pre-finding-Nemoto’s-phone era of my life. Nemoto doesn’t say anything – in fact, he seems almost eager to see what comes of the filming.

We film an extraordinary counseling session. I can tell that my having found Nemoto’s cell phone means something much bigger to him, too – after all, we wouldn’t even be there with the yakuza leader if not for finding it and receiving his text. From that moment on, I decide that Nemoto can never say to no to me, because I found his phone.

One week later, we learn that Nemoto has been diagnosed with emphysema. We have an interview with him in which he seems angry that I keep asking why he can’t quit smoking, when he counsels so many other people struggling with addiction, and has gone through much more challenging physical deprivations as part of his training.

Two months later, November 2014, Shoot #4: We go through a horrible hospital ordeal with Nemoto as he endures two seven-hour-long emergency heart surgeries. I’m scared that Nemoto might not make it, so this time in the hospital turns out to be far more stressful than the camping fiasco. A week later, Nemoto goes home to his family. I go back to New York.

At home I make a photographic print of a still from the recent footage, of Nemoto showing his son fireworks for the first time, two days after getting out of the hospital. I frame it and mail it to Nemoto.

“Your photo,” he says. “Every time I want to smoke, I just look at your photo, and I think about my son. Then I don’t do it.”

“That makes me so happy to hear,” I say. “Because now, at least, I know that I’ve done one good thing with my life.”

“No, Lana-san,” he says. “You’ve done two good things with your life.”

I don’t know what he’s talking about. But then he takes out … his phone!

So that’s why Nemoto trusts me. And that’s the kind of relationship we have. 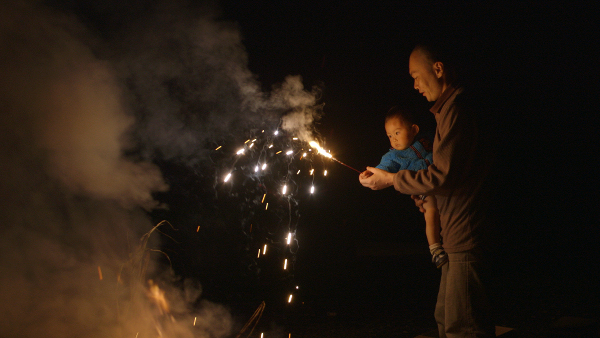 Lana Wilson is an Emmy award-winning filmmaker based in New York. Her first film, After Tiller, premiered at Sundance in 2013, and went on to win an Emmy for Best Documentary. Oscilloscope Laboratories gave the film a 50-city theatrical release, and it was nationally broadcast on PBS’s POV. Her second feature, The Departure, opens in New York at Metrograph on October 13, and in Los Angeles at the Laemmle Monica on October 20. It will expand to additional select cities shortly after that.

Movement to Market: On the Making and Selling of Whose Streets?