Dispatches from my den of iniquity: that’s me, back in bed, ten feet to the left of the exercise ball and the ailing monstera fig, staked up with twine to keep its leaves from inching toward the radiator. By noon today, Walgreens had erased any memory of Easter chocolate. What the fuck are holidays for if not day-after runs on half-off Cadbury Mini Eggs. No question mark needed. Period. And if you disagree, you may take a flying fuck at a rolling donut as you exit my America.

I’ve been really sad lately. I’ve already written about it a little — it’s not like I’m hurting for inspiration or desperately trying to cobble together a career with little experience or relishing expunging the smegma from the most vicious, self-defeating parts of my gray matter or too exhausted to come up with original subjects because why do that when I can just gaze predictably into my very own endless navel, or anything wild like that — and while it’s not really necessary to write about it again, here, I feel like I might as well. I’ve already written about my sadness here before, so I know this is a safe place to put it if I don’t feel like holding it for a while.

To redress: as a verb, to remedy or set right (an undesirable or unfair situation), and as a noun, remedy or compensation for a wrong or grievance.

My grievance, as I see it, has been burying my sadness under a candy shell of snappy one-liners and professional photos posted to Instagram. Or maybe, more aptly (since I need to give people more credit for having me all figured out even when I don’t realize they do), I’ve been caught using sleight-of-hand to distract from the truth of my situation. The dove has disappeared from the box and everyone sighs because it’s magic; of course the dove, still warm, lays crushed in the chamber just below the table.

Allow me to set things right. I have been a bullshit Internet con artist since people started to care about my band, because I felt like I wasn’t allowed to be sad when my life was so exciting. I have wanted nothing more these last two years than for people to think I’m cool and smart and pretty and have my shit together, when really most days I suffer from a form of impostor syndrome so serious that it often takes me two whole days to emotionally resurface after attending a show.

You post enough photos of your smiling self onstage with your band wearing little vintage dresses with precious, effete captions and you too can amass eighteen thousand Instagram followers — maybe ten of whom are your real friends who know that when that picture was taken, you hadn’t shit in a week because anxiety had locked up your entire gastrointestinal system. It’s not that you don’t look good, it’s just that your real life and your aspirational Internet-self are so far apart they might as well be in different time zones.

Many years ago I made a zine, called National Handbag, about fashion and punk rock and mental health. I interviewed my friends, wrote weird little incendiary op-ed pieces, took comic submissions and kept tour diaries where I wrote about what I wore. I made it through two issues before I got “bored,” which used to be the word I used instead of “sad,” because I never felt sad in the way anyone else seemed to understand the word “sad.” I was depressed. I didn’t cry or binge-drink or emote wildly; I just lost interest in everything I’d ever loved and turned into a bedridden potato that didn’t have the energy required to sleep. I spent a lot of time smoking weed and regarding my plaster ceiling with a gentle, unfocused gaze.

Music and fashion and making zines were the first things to go, but when I was still enthralled by the possibility of talking to other punk people about clothing and fashion, I loved to ask people what they wore when they felt sad. For some people, fake-it-til-you-make-it was the supreme tactic: putting on a suit and heels and lipstick (or a spiky battle vest) and pretending you own the world. Sometimes, it was tactile: wool is comforting to some, elastic waists and ankles to others. Some craved restriction or weight — heavy coats and heavy boots to keep themselves earthbound during bouts of mania where they risked flying too close to the sun. Performance necessitated a whole different sort of costume: dressing for your preferred archetype, even when — and especially if — you’re sad.

I think about it now in relation to my recent run as unexpected hardcore front-person. I started the gig in ’60s shifts, fake eyelashes and smudge-proof red lipstick, and piles of glittering rings and big, clunky engineer boots. I finished in black jeans, men’s T-shirts, no bra or makeup, and…big, clunky engineer boots. There have been so many nights these past two years when I would pull my tights on and slide a smelly, wrinkled dress over my head five minutes before I had to go on stage, look at myself in the mirror, sigh, confront the fact that I would rather run barefoot into the snow than go onstage and scream and worry about how I look for the fourteenth night in a row. I didn’t want to be that person in that moment because it wasn’t real, and it would never feel real, and it didn’t feel good by extension.

Looking back over all my slightly crazed social media posts from the past two years — seeing those smelly, wrinkled dresses in Paris and New Zealand and Mexico City — I wonder if I ever was that person at all, or if it’s just what became me. When people started to look at me and I became afraid that the real me wasn’t all that worth looking at, she was there to keep me safe. She did a pretty good job, all told; it was easy to forgive the Twitter psychos their trespasses when I held deep in me the secret knowledge that they weren’t even yelling at a real person, but rather a carefully constructed, hyper-confident Meredith 2.0. If they only knew how miserable I really was, I’d comfort myself, they wouldn’t fuck with me at all. I’m as unhappy as they are.

So I wiped my Twitter and Instagram, and I’m starting over. It’s weird, the feeling that you have to stick a flag in your own life and declare it yours, but she’s been running the show for a few years now and it’s time I take it back. By posting unfiltered photos of mushrooms and disco balls, I’ve somehow ended up losing several hundred followers in a matter of four days. Eighteen thousand people followed her; we’ll see how many stay around now that she’s gone.

Because once she started to color outside the lines — when I no longer felt I was allowed to leave the house bare-faced or “not in character,” when I quit smoking and gained some weight and it almost ruined my career, when her hyper-vigilance and over-talkative tendencies began to bleed out into what should have been genuine interpersonal interactions, ruining some friendships and straining the shit out of others — I knew it was time. It’s been time, honestly. Maintaining a 24/7 Zooey-Deschanel-meets-Tracey-Emin shtick, feeling like I had to force people to believe I’m worth their attention, has been exhausting.

That’s why I’m retiring her instead of killing her off. She can go to rehab in the Poconos or take up lobster farming or start an artisanal mayonnaise shop for all I care. She did a really good job keeping up appearances. A lot of the dresses have been donated to various Beacon’s Closet locations in and around Brooklyn (one time, Morgan Spurlock was in line behind me!) because I just don’t want to look at them any more.

If you can believe this, nothing you’ve read so far was originally intended to be part of this week’s column. I had every intention of writing about “the look of Sarah Records” and the relationship between early twee and C86 bands and what people nowadays are calling “normcore,” because if you watch “My Secret World: The Story of Sarah Records” you’ll see that every band in 1988 looks like every band in 2016 down to the round glasses and anoraks.

Books by photographer Sam Knee meant to catalog the lost history of the bands and fashion of that time are startlingly fucking contemporary: flicking through it at a bar with a friend, I could point at ’80s bands and specify their doppelgangers.

“Look, that’s Big Ups. And that’s Priests, and that’s Warehouse, and that dude wearing the beret is in Cülo.”

The big joke about Sarah Records, the reason critics hated them with a virulent, metallic edge, was because of their perceived softness and sensitivity. Looking at the clothes worn by Sarah bands, yeah, it makes sense. They look comfortable. Nobody’s elaborately coiffed or restricted in any way. It all looks like one long exhale, with normal hair and minimal makeup and grooming.

So I’m sad, and for a couple of weeks now I’ve been listening to “Pristine Christine” by the Sea Urchins on loop, wearing stretchy overalls and old T-shirts and thick socks and using my new glasses to justify not wearing makeup. I’ve stopped dyeing my hair, and after I finish this column, which is late at the time of writing, I’m going to go down to my bathroom and listen to Boyracer and shave the rest of it off. I don’t really know why, but I’m compelled to, as if it’s the final gesture of ceasing my relationship with her, the person I was just months ago, or maybe never was at all.

PS: I still want to know what people wear when they feel sad. You can send pictures @gravesmeredith on my (weirdly empty) Instagram and Twitter, and I promise it will be a real warm-blooded human interaction.

The Debut of ‘re: dress,’ Meredith Graves’ Talkhouse Column on Fashion in Music — and Vice Versa 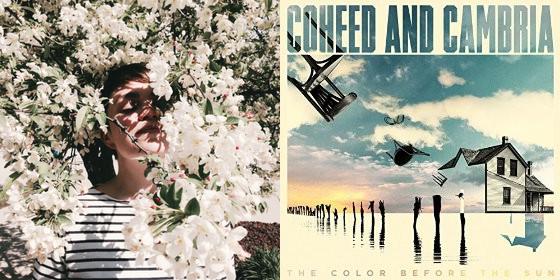