Dana Michelle Cook was born and raised in Los Angeles and currently resides in Chicago. A former reality TV producer turned documentary filmmaker, she’s dedicated to shining light on issues that bring about social change. In her continued commitment to creating content that showcases inspiring women, she’s co-created Freeheart Creative with Katie Wilkes, producing a new docu-series focusing on global female leaders mobilizing communities in Kenya, Rwanda, Haiti, Syria, and beyond. Creating a film and movement alongside Sarah Moshman, The Empowerment Project is her proudest accomplishment to date, and releases domestically and internationally on iTunes, Amazon, Google Play and On Demand January 17, 2017. Follow Dana on Instagram.

“Make sure you get an ECU of that.”

My supervising producer was watching his monitor down the hall. His voice was agitated and abrupt through my headset.

“Just get the shot.”

Our crew had been smashed into a closet-size dressing room for the past three hours, suffering through the 90+ degree temperatures in our off-the-strip Vegas hotel.

And I’d just been instructed to get an extreme close-up of a set of bleached dental falsies being shoved into a five-year-old’s mouth.

The oversized mouthpiece (affectionately known as a “flipper”) was the finishing touch to her beauty queen look: deep bronze spray tan, hair extensions, heels. “Full glitz,” as they say in the pageant world.

“The judges will love it,” her mom whispered to her. “Blow plenty of kisses to them from the stage.”

Behind the caked mascara, this tiny human looked at me, her eyes as big as saucers. Tears pooled at the corners, ready to spill over. Her look was one of desperation, a cry for help, for someone – anyone – to save her.

I nearly crumbled into a million tiny pieces of sadness on the floor.

The saying “There are some things you can’t unsee” would perfectly illustrate my disastrous life as a reality TV producer for the latter part of the 2000s. Toddler beauty pageants, married couples throwing each other off cruise ships to collect insurance policies, addictions to eating couches and dry wall, huffing gasoline, bathing in bleach, digging hair out of shower drains – you name it, I probably produced it.

But that moment in the dressing room with the baby beauty queen – that was the defining moment. I thought, “This is what rock bottom feels like.” At the time, I didn’t understand how I’d fallen so far into work that was poisoning the minds of America. I was failing myself, but even worse, I was failing this little girl in front of me. I was enveloped in darkness.

The year was 2012, and that dressing room incident had pushed me to the brink of insanity. But what it also did was light a fire. A raging fire. That day on set, I made myself a promise: to run as far and as fast from my soul-sucking career as a reality TV producer as I could – and never look back.

My friend and fellow producer Sarah Moshman had been witness to my unraveling in Vegas. She had experienced her own fed-up moments over the years on set with content, politics, colossal egos. You know, all the things.

We both had a front-row seat to the premier attraction of mainstream media commodifying women and girls. A Hollywood machine that would chew them up and spit them out in the name of entertainment. If the Kardashians, the Real Housewives and the crazy-eyed maniacs from The Bachelor were serving as role models for the next generation of women, we had a real problem on our hands.

Where were the stories about real, badass women blazing trails in their careers, shattering glass ceilings and defining what it meant to be a woman in America today? Why was mainstream media denying women any sort of platform to have their stories told?

Sarah and I kept coming back to the idea that “you can’t be what you can’t see.” With how they saw women presented, how could girls know what they had the potential to become? They couldn’t.

We asked ourselves a hallmark question: “What would we do if we weren’t afraid to fail?” The answer was clear: to take the biggest gamble of our adult lives, leave everything behind, and create a feature-length documentary about extraordinary women thriving in their careers and making an impact in the world. Stories that would mean something. Stories that would inspire hope and action. Stories that would show what’s possible. We would film it with an all-female crew (the brilliantly talented Ashley Hammen, Alana Fickes, and Vanessa Crocini) and mentor aspiring female filmmakers all along the way.

We owed it to girls growing up in the world today. And to ourselves. I owed it to that little girl in the dressing room bedazzled and spray-tanned with a new set of false teeth. We all deserved better.

That film came to be called The Empowerment Project. And then that film became a movement.

It’s been an unexpectedly powerful journey over the past three years. Sarah and I have traveled around the world, screening the film and inspiring conversations at hundreds of schools, camps and female-focused organizations, to audiences from the tens to thousands. We talked about the strength of our voices. We let them know that curiosity and vulnerability are at the root of every major accomplishment. And that great people do great things before they feel ready.

And this time, when I looked into the eyes of these young girls, I didn’t see despair and fear looking back at me – instead, I saw hope and determination.

The film taught me what was possible in my own life, and the lives of the thousands of others that it’s touched and continues to influence. I’m honored to be a part of something so much bigger than myself by witnessing how bright the future can be when girls are empowered to speak their minds, raise their hands and believe that they’re enough.

Oh, and if you’re wondering about the little beauty queen? We stayed in touch after that shoot. It was her first and last pageant. She’s since grown up to become a strong, independent, fierce young woman on her own journey of empowerment.

At the Golden Globes just a few days ago, Meryl Streep aptly quoted the late Carrie Fisher: “Take your broken heart, make it into art.” A timely and perfect reminder that even in the darkest of moments, there is always the possibility of creating beauty.

Dana Michelle Cook was born and raised in Los Angeles and currently resides in Chicago. A former reality TV producer turned documentary filmmaker, she’s dedicated to shining light on issues that bring about social change. In her continued commitment to creating content that showcases inspiring women, she’s co-created Freeheart Creative with Katie Wilkes, producing a new docu-series focusing on global female leaders mobilizing communities in Kenya, Rwanda, Haiti, Syria, and beyond. Creating a film and movement alongside Sarah Moshman, The Empowerment Project is her proudest accomplishment to date, and releases domestically and internationally on iTunes, Amazon, Google Play and On Demand January 17, 2017. Follow Dana on Instagram. 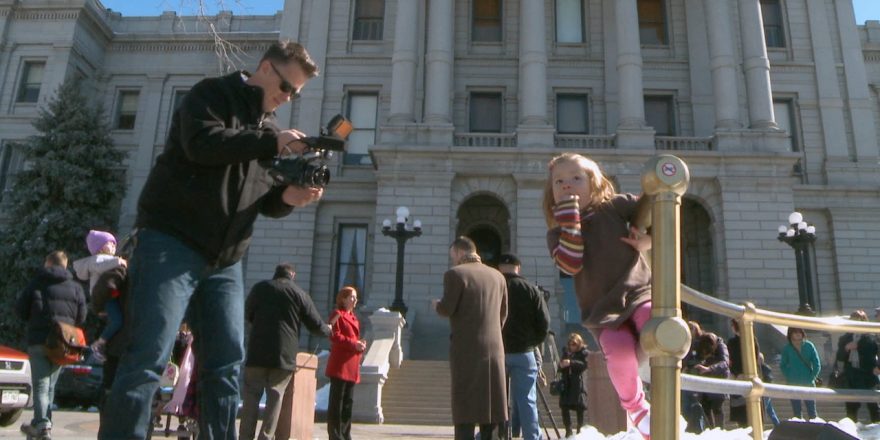