Eric Juhola founded the film and television production company Still Point Pictures and produced the Gotham Award-nominated documentary Off the Grid: Life on the Mesa, winning 8 best documentary prizes at festivals around the world, followed by a theatrical release and US broadcast on the Sundance Channel. Eric is also the producer of the ITVS/PBS documentary Broken Heart Land which premiered at the Frameline Film Festival and aired on PBS WORLD Channel’s series America ReFramed in 2014. Juhola’s directorial debut, Growing Up Coy, is available on iTunes and releases internationally on Netflix on January 6, 2017. The film, produced by Still Point Pictures, is also currently raising funds to embark on a community impact tour across the U.S. in spring 2017.

“Haven’t we overdosed on trans?” a Denver journalist jabbed during a phone interview. Sensing my hesitation, he elaborated. “Oh, you know – with Caitlyn Jenner … all these TV shows, and in the media – it seems like ‘transgender’ is everywhere. How many more trans stories do we need?”

I paused at the thought that the documentary I had been working on for four years about the struggles of a 6-year-old transgender girl and her family had been reduced to just another “trans story,” and lumped in with the wave of new programming related to transgender issues, mostly comprised of human interest news media segments and reality television shows.

As a serial empathizer, I tried to see his point of view. It’s human nature to categorize similar items (or people) together in order to reduce complexity and uncertainty in our lives – especially in this world of information overload. And perhaps he wasn’t that far off. After all, I was still processing the rejections from nearly every broadcaster who “already had a ‘trans project’ in development,” usually with a celebrity attached. It seemed there just wasn’t room for multiple transgender projects per outlet, no matter how diverse the stories or how different the storytelling style.

Maybe life would have been easier if I had approached our vérité documentary like a reality TV producer. Prior to making documentaries, I produced and directed reality television for eight years and knew how to quickly churn out a perfectly timed, five-act TV hour in a few weeks time. I could have written a few storyline beats in advance and then placed my subjects in situations where conflict would play out, culminating in a “big win” or “devastating loss.” That way I could have spared myself years of anxiety wondering if I had a full-length film within my 200+ hours of fly-on-the-wall footage or if I could finish raising the funds needed for a multi-year project.

I thought about E! Entertainment’s now-canceled I Am Cait (which I very much enjoyed) where producers airlifted a posse of new transgender friends to Caitlyn Jenner’s Malibu home for her to interact with over differing political ideologies. And TLC’s I Am Jazz – about a transgender teen navigating adolescence – which at times played out like a family sitcom, editors neatly resolving family conflicts at the end of each 22-minute episode. And, of course, in response to the so-called “bathroom bills” sweeping our country, there are countless transgender human interest stories on nightly and weekly news programs assembled by producers who are determined to tug on heartstrings as we see a teary-eyed response to a coiffed reporter’s invasive or deeply personal question.

In our defense, we are a savvy audience in 2017. Viewers of most non-fiction TV forgive a certain amount of “set-up” by producers and are sophisticated enough to know that the story has to be structured and tightened through editing. Perhaps it could even be argued that this apathy about truthful TV has bled into our politics, with reality TV stars becoming politicians and vice versa.

But I broke up with reality TV for a reason. Time and again, I found that I was more interested in the unfiltered, nuanced, complex stories of human beings that played out over time. I wanted to create a space that allowed viewers to reflect and draw their own conclusions from reading between the lines, instead of hitting them over the head with answers. Unlike other formats, long-form documentary takes its time to build empathy more deeply, immersing audiences fully in the situation of others in a dynamic and authentic way. In the case of social issue docs, hopefully this empathy compels audiences to engage or act.

In 2011, with most resources focused on legalizing same-sex marriage across the country, the stakes couldn’t have been higher to move the dial for transgender people, who were being left on the sidelines in the fight for LGBT equality. I contacted New York-based attorney Michael Silverman, who exclusively represented transgender clients, and began a dialogue about the possibility of making a film to spotlight the issue. At the end of 2012, he let me know he received a call from the parents of Coy Mathis, who was banned from the girls bathroom at her elementary school – a case which could have high-profile legal ramifications for the transgender rights movement.

My husband / producer and I took a leap of faith and flew to Colorado to meet the Mathis family, who certainly were not bigger-than-life made-for-TV subjects, or even very emotive at all. But they were passionate and driven to fight for their daughter’s rights. Aside from hanging some structural story hooks on the case against the school, I was determined to let events evolve organically.

Within a few months of filming, I came face-to-face with a meta crisis of conscience, since real life rarely goes the way we think it will. When Coy’s story went public around the world, I was suddenly vying with 20 other producers and cameras for a glimpse of the “transgender 6-year-old,” and saw first-hand the stress and anxiety put upon the family when the media scrutinized, judged and sensationalized their story. I had to ask myself, “What am I doing – am I contributing to this exploitation? Am I one of them, the kind of producer I was rebelling against in telling this story?”

What I realized in that moment, and later said to the reporter asking about the oversaturated transgender landscape, is that actually Growing Up Coy is not about a “transgender 6-year-old.” Because that, in and of itself, is not a story. It’s about a family in crisis. It’s about how far a parent will go to protect their child’s equal rights. It’s about sacrifice, heartache and redemption. And it’s about the media itself, who in reducing this family’s plight to a ‘trans story,’ almost tore them apart in the process.

Of course, this response never made it into the article, since the reporter’s angle was to write a piece about a “trans” film. But I now firmly believe that the only way to move the cultural dial with an “issue film” is to stop focusing on the “issue” and let the human experience unfold honestly and authentically. This can be especially challenging for filmmakers intent on making change with their films – it certainly takes patience and an open mind with your subjects, and it takes discipline when you’re shooting to be in the moment and not overly focused on the end result. Real life is messy, but if you can resist the urge to clean it up and instead explore the mess in all its complexity, you may discover a deeply engaged audience in the process who has forgotten they are watching a film about an “issue.”

I hope for the sake of Growing Up Coy and the many other brilliant documentaries out there featuring transgender subjects in this blatant culture of categorization of people (Transgender, Female, Mexican, Black, Muslim, etc.), that broadcasters, festival programmers, fellow filmmakers – and yes, even reality TV producers – are able to step back and contextualize stories for the way that they connect on a human level, and not only define them by labeling the issues they address.

Eric Juhola founded the film and television production company Still Point Pictures and produced the Gotham Award-nominated documentary Off the Grid: Life on the Mesa, winning 8 best documentary prizes at festivals around the world, followed by a theatrical release and US broadcast on the Sundance Channel. Eric is also the producer of the ITVS/PBS documentary Broken Heart Land which premiered at the Frameline Film Festival and aired on PBS WORLD Channel’s series America ReFramed in 2014. Juhola’s directorial debut, Growing Up Coy, is available on iTunes and releases internationally on Netflix on January 6, 2017. The film, produced by Still Point Pictures, is also currently raising funds to embark on a community impact tour across the U.S. in spring 2017. 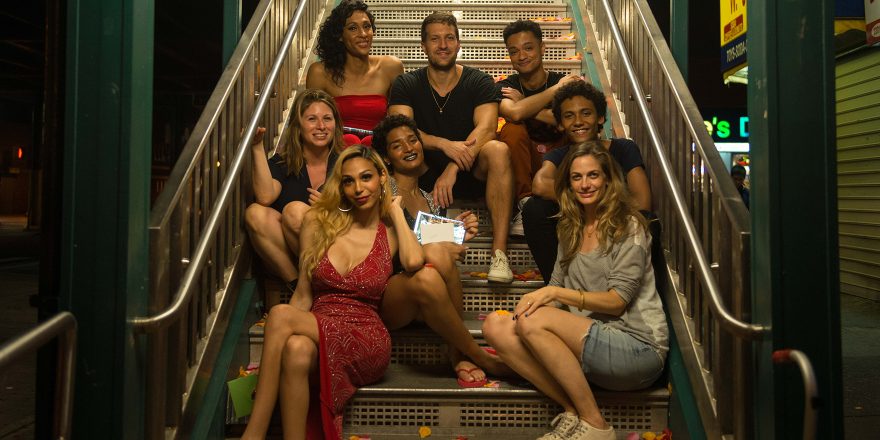 Finding the Faith, or What I Learned Working with At-Risk LGBTQ Youth