Once upon a time, Yoko Ono committed a terrible crime. She married a hugely famous, beloved British pop star. Back then, as now, Britain was in the grip of a kind of low-level, everyday racist nit-witted paranoia. Just as Estonian immigrants who clean toilets for next to nothing are regarded as “stealing British jobs” (that no one actually wants) Yoko, a respected avant-garde Japanese artist, was regarded as a “slit-eyed witch” who’d stolen cuddly Beatle John out of the arms of the reliably dense British public. Ah, didums.

Of course times have changed (a bit) and the sussed out rock & rollers dig Yoko’s strange and wonderful back catalogue most righteously. So, in writing this piece I was rather taken aback when I visited a few Beatle forums — I sincerely advise you never to do this — to find that amongst the Beatle diehards the old prejudices and cultural conservatism reign supreme. Mention of Yoko’s name is greeted by squeals of “talentless,” “can’t sing,” and “unlistenable.” There’s no bore like a Beatle bore, it would seem.

There’s no bore like a Beatle bore, it would seem.

Whenever I’m trapped by middle-aged white men wanging on about whether the Beatles’ White Album should’ve really been a single LP (John and Yoko’s assault on musique concrete, “Revolution #9,” is always first for the chop), I like to throw in my favourite curveball: when Big Paulie Mac left the Fabs, they should’ve replaced him with Yoko. Then, to seal the deal, I tell them that that’s what actually happened — for Ono’s incredible Plastic Ono Band LP of 1970 is a Beatles album in all but name. John’s there playing frenzied sonic rhythm guitar, and Ringo plays the drums of his life. George is represented by a drone sample (in 1970!) that makes up the basis for the terrifying “Greenfield Morning I Pushed an Empty Baby Carriage all over the City.” My Yoko theorizing never cuts much of a rug among the Beatle Bores, but I suspect it would gain more sympathy among the cast of Yoko’s recent album Yes, I’m a Witch Too.

Taking its title from a killer track on 1974’s A Story, Yes, I’m a Witch Too finds Yoko rounding up a bunch of groovesome hipsters (Sean Lennon, Death Cab for Cutie, etc.) to rework her back catalogue. And do you know what? It’s ace. Not ace because “the world has finally caught up with Yoko” (it hasn’t) or ace in a condescending “this is an octogenarian woman so she can do what she wants” way. No, Yes, I’m a Witch Too is ace entirely on its own merit.

As a natural fan of Room-Clearing Rock & Roll, I am pre-disposed to Yoko’s frankly terrifying banshee yodel.

As a natural fan of Room-Clearing Rock & Roll, I am pre-disposed to Yoko’s frankly terrifying banshee yodel — best heard on “Don’t Worry Kyoko (Mummy’s Only Looking for Her Hand in the Snow)” (go for any of the seventeen-minute live versions), Yoko Ono/Plastic Ono Band (1970) and her masterpiece Fly (1971). When Yoko started actually “singing,” the effects weren’t quite so engaging due to her somewhat “ordinary” voice and some possibly lazy-assed engineering (“Do we have to record the tuneless witch?” etc.). On Yes, I’m a Witch Too, that has all changed. Someone has located the “Press this to make Yoko’s singing sound good” button in the studio, and the result is that her voice now sounds, er, good.

First up is “Walking on Thin Ice,” possibly Yoko’s best-known song, brilliantly improved upon here by Denny Tenaglia. Indeed, most of the material here actually surpasses the original versions, in particular Peter, Bjorn & John’s apocalyptic treatment of the classic “Mrs. Lennon” (originally on Fly), Blow Up’s attack upon “Approximately Infinite Universe” — the original suffered from an indifferent vocal recording — and Miike Snow’s versh of “Catman.” The best track is the utterly spook-out take of the little known “No Bed For Beatle John” (harrowing in its 1969 original form — now harrowing with added nightmarishness).

I don’t think there’s any such thing as a novice Yoko fan, and I’m not sure there’s an easy entry point for someone as unique and strange as Yoko Ono.

Yes, I’m a Witch Too only stumbles when it tries too hard to be contemporary. It’s impossible to make Yoko contemporary, as she has always traveled the lesser-known path of “beyond everything.” So, Death Cab for Cutie’s “Forgive Me My Love” is a clattering pileup of missed house beats, and Moby’s attempt on “Hell in Paradise” is as bland as vegan cheese. But then, I’d rather piss in my own eyes than listen to anything by Moby. Or eat vegan cheese for that matter — it just ain’t my bag(ism).

So, is Yes, I’m a Witch Too an entry point for the novice Yoko fan? I’m not sure. I don’t think there’s any such thing as a novice Yoko fan, and I’m not sure there’s an easy entry point for someone as unique and strange as Yoko Ono. So, if you want to shake up the branch meeting of your local Revolver appreciation society, you should dive in at the deep end, split your mind wide open and track down a copy of Yoko Ono/Plastic Ono Band or Fly. If you’re any kind of free-thinking rock& roller worth his/or her snakeskin boots, you won’t regret it. Then when you’ve listened to “Mindtrain” from Fly two thousand times, go out and buy a copy of Yes, I’m a Witch Too. 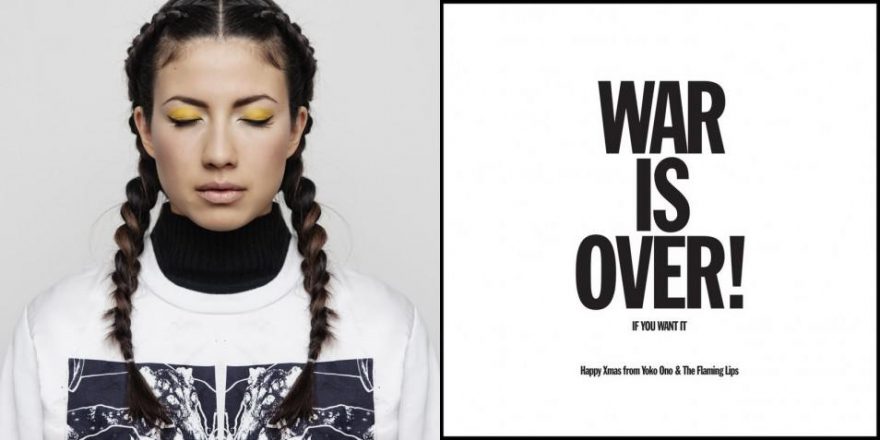