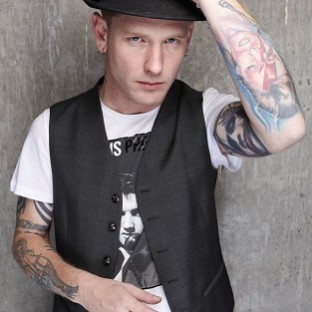 this is fucking bad ass https://t.co/tMHBgIBFwM

Born on December 8, 1973, Corey Taylor is the lead vocalist for both Slipknot, a nu-metal/heavy metal band (formed in 1995), and Stone Sour, a Hard rock/alternative metal group (formed in 1992). A commonly known fact among Taylor fans, he was a member of Stone Sour before he was in Slipknot. Taylor did not join Slipknot until 1997, when the "old" Slipknot (which recorded one demo MFKR and one unreleased album CrowZ) parted ways with original vocals Anders Colsefni. Taylor then joined Slipknot and they later released their debut self-titled album, Slipknot. Anders and Taylor performed live together for a brief period of time until Anders officially announced his departure from Slipknot, leaving Taylor as the main vocals. Some speculate that Taylor's initial interest in performing stemmed from none other than Elvis Presley. Taylor's grandmother helped support his vocal career by purchasing equipment for him and helping him with his talent. One of the more defining and memorable features of Slipknot is the masks that members wear while performing. Each mask is custom made by the respective member and has some personal meaning and symbolism. Taylor described the masks in an interview, saying "it's our way of becoming more intimate with the music. It's a way for us to become unconscious of who we are and what we do outside of music. It's a way for us to kind of crawl inside it and be able to use it." Taylor's mask is of a crash dummy with dread locks. Back in 1999, when Slipknot released their first debut album, Taylor's dreads were his actual hair, wrapped up and put through holes at the top of the mask. This changed however when Taylor developed a scalp infection from the hair. He later replaced the hair with artificial hair that was sewn on top of the mask. Taylor shares a comment from the time he worked at an adult store: "People would look at me like I was a freak, but they were the ones buying in the porn shop at four in the morning. Straight looking people I'd know would come to the register with 14-inch dildos and then they'd recognize me sitting there, and I'd be like, 'Like any lotions or lubes with that?'. But I didn't want anyone to feel dirty in the shop - because people are made to feel dirty every day of their lives, and that's bullshit." As mentioned above, Taylor has been using his own vocal merchandise. The microphone that Taylor uses for Slipknot is a Shure SM58 microphone. Taylor's vocal style varies depending on the particular performance. He possesses a wide range of singing capabilities, from strong melodic styles to the intense screaming characteristic of some Slipknot songs. Taylor has several tattoos on his body, including: * Chest - the band logo, which was tattooed onto his body in his hometown of Des Moines. * Neck - the number eight, representing his number in the band Slipknot. * Forearm - a tattoo that says "Truth." * Right side of his neck - a tattoo that stands for "Father". * Left side of his neck - a tattoo that stands for "Death." * Right and left hip bones - smiley face tattoos. * Left upper arm - a tattoo of the Joker from the Dark Knight Although it is not known what the "Father" tattoo means, it is likely that one of two explanations is correct. Taylor did not know his father while growing up. He may have had the tattoo done before meeting his father as a symbol of his desire to meet him or possibly to serve as a physical manifestation for something he did not know. This is hinted at in several Slipknot lyrics which concern a father figure. Taylor met his father in 2005 and has since developed a strong relationship with the man. The tattoo may be a representation of the bond that has grown between the two since their meeting. Taylor's life has included several instances substance abuse and depression. He struggled with drug and alcohol addiction throughout his early adulthood. He has announced that his book Seven Deadly Sins will be released on July 12, 2011. Read more on Last.fm. User-contributed text is available under the Creative Commons By-SA License; additional terms may apply.

When a master horror film director is also a master film-score composer, you can bet his music will take you down some dark alleys.
Slipknot's frontman says that on their new album the Melvins are "pissing in the deep end" — and that's a good thing.
I am an unabashed Taylor Hawkins fan. I have been for years. From his earlier recordings to his work with the Foo Fighters and the Coattail Riders...
When I was a kid, I bought albums based on two sets of criteria: 1) if I knew the band and I’d been waiting patiently for the new release, or 2) on...
Most people don’t know this about me, but I like to listen to some pretty diverse shit when it comes to music. Being in two heavy bands, most fans...