When I was a kid, I bought albums based on two sets of criteria: 1) if I knew the band and I’d been waiting patiently for the new release, or 2) on a whim because of something that caught my eye. Usually it was the album cover that drew me in, so I found myself buying things like Frank Zappa’s Sheik Yerbouti, Legacy of Brutality by the Misfits and Flogging a Dead Horse by the Sex Pistols, all of which turned out to be great purchases… although there were always some odd exceptions. (Something I learned the hard way: Molly Hatchet doesn’t sound like their album covers look.) These days, in the digital graveyard, you can’t really do that.

Now, instead of listening to music based on the album cover, I tend to go for a name that intrigues me. If the title is so off the deep end it’s almost certainly code for something, I have to hear it. Such was the case with Fuck Off Get Free We Pour Light on Everything by Thee Silver Mt. Zion Memorial Orchestra. This is by far the most strange and compelling album title and band name I’ve heard since the self-titled 1990 debut of Psychefunkapus. Now, I know nothing about Thee Silver Mt. Zion Memorial Orchestra — still don’t. I just liked the titles and decided I was going to listen, based purely on their collection of syllables. “We live on the island called Montreal… and… and we make a lot of noise… because we LOVE each other!” So heralds the little kid who kicks off this six-song amalgam of arthouse speaker-dancers. My first impression of this disc was a bit misleading; I originally felt like if Oasis and Radiohead snogged in October, by June they would have a baby that sounded like Thee Silver Mt. Zion Memorial Orchestra. But I’ve been fooled by first impressions before, so I dived in a little more thoroughly and found an earnest sense of melody and atmosphere that was also playful and fun. This album wasn’t trying to change your mind as much as it was trying to change shit up a bit.

The first track, “Fuck Off Get Free (For the Island of Montreal),” sets the tone. It’s got that old school Pink Floyd aura, with melody by Waters and madness by Barrett, all with slightly better production. You can almost feel the strobe lights on your face. But at a portly 10:22, the fucker’s too long: just when I felt it should end, it went on for another four minutes. But hey, art is like soulmates — you might choose who or what you fuck, but when you meet The One, it’s on like Donkey Kong and you just got to go with the flow. So the song does exactly what it (and the band) needed to do, right down to the last refrain of “Hold me under burning water.”

“Austerity Blues” comes next and fuck, this thing’s even longer. “I’m fuckin’ high in Buffalo…” No shit. Don’t get me wrong: the music feels good. It just has the tendency of that friend who won’t go home after the party: I just want to go to bed and homeboy wants to compare Star Trek and Star Wars. Wrap it up, Miles Davis… or at least get to the point a little faster, before I get bored and start doing the after-party dishes I was planning to put off ‘til morning. The song finally gets going around 2:30. The music is compelling and wonderful, swirling around so when you close your eyes, you get the spins. Still can’t get a handle on the majority of the lyrics yet. This is the problem with going all-out for the art: sometimes the very landscape you’re trying to create walks all over the message you’re trying to send. But then again, sometimes that makes you want to listen to it over and over. Problem is, at over 14 minutes, you’re not pulling this tune up on your way to the grocery store. You either listen to this album from soup to nuts or not at all. There’s nothing casual at 14 minutes except sex and conversation.

That’s my first disappointment with this album —it doesn’t go anywhere I haven’t already been a few times. With the exception of the actual orchestral bursts that come over the top of the standard guitar/bass/drums/voice, it’s a pinch too pedestrian. Don’t get me wrong: I like it — a lot actually. But if you’re going to take me home on the scenic route, you better drive me past some shit that I’ve never seen before. If your songs are long but simplistic, no amount of gorgeous layering is going to change my mind. Give me a reason to keep listening or I’m switching the track.

“Take Away These Early Grave Blues” is the fourth-shortest song on the album, at a trim 6:47. The music kicks in a bit like a kung fu movie, all Chinese pentatonic, and guitars blending quite well with the violins and other woody sidekicks. They get right to it. “Take away these/Take away these/Take away these early grave blues!” the singer wails, setting the groove to burn as the band wails right along with him. There’s excitement in this, with the instruments colliding and fucking and standing out all at once. The ending is like an epic altar call with the singers crying out, “Love… each other…”

“Little Ones Run” is a song I can love, a piano dirge with that “Tom Waits in ’78” vibe, the singers sitting together, lazily saying, “Wake up, darlin’, the sky is callin’/The moon’s a mess, fallin’ down…” At least that’s what I hear. It’s fucking gorgeous. The thing I love almost as much as the melody is that I can hear and feel the wood in the piano and the creaking of the person sitting on its stool, trying to find the spot that won’t put their ass to sleep as they dance across the ivory. For a long-winded album, “Little Ones Run” is entirely too short. I could have listened to this song for another two minutes.

Oof: with “What We Loved Was Not Enough,” we’re back over 10 minutes again. But it starts full of promise. “What we loved was not enough, even though we wanted to…” comes the baleful moan of the singer, and anyone who hasn’t felt that at least once in their lives has never truly loved anyone. With a hint of Robert Smith here (without going off the Cure end of the pool), the music is simply fantastic: the guitars weave together like a warm Irish blanket. The chord progression is so good I could listen to it another seven and a half minutes, which is good because that’s how long it goes on. But you could cut five minutes out of this and it would be stunning. What I realize about Thee Silver Mt. Zion Memorial Orchestra is that if they aimed for the moon, they’d hit Pluto. Unfortunately, my mind wanders after a while. By the time the warmer harmonies come in on the outro singing, “And the days come when you no longer feel,” I honestly don’t care anymore, which is sad because that’s a great line to answer the song’s title.

The last track, “Rains Thru the Roof at the Grande Ballroom (For Capital Steez),” is a bit down, in a Portishead kind of way, but very cool. The music again is lush, with the drumbeat muted and bouncing off pianos, effected guitars and a staccato vocal that punctuates with, “Hold on… Hold on… Don’t let go because…” The singer lifts and lifts off the melody, telling a story I once again can’t grasp because of those same effects. Fuck Off Get Free We Pour Light on Everything by Thee Silver Mt. Zion Memorial Orchestra is a reflection of the way they name the songs they write: long and pretentious, but also soaring and poetic. The way they approach their songs is a lot like the way a child tries too hard to hold on to one more moment of fun, one more piece of candy: with that feeling like it’ll never be this good again. But this makes the songs lose their poignancy and impact. There are several great moments and the band itself is very good, but I found myself tuning out more and more often. If you’re a fan of the band, it’ll be quite the experience. If you’re not, your mind will wander off to Pluto. 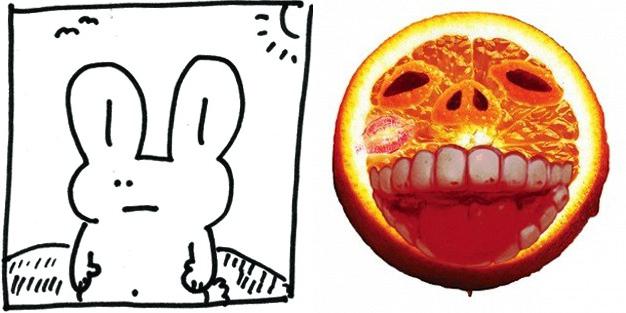