Caleb Nichols (he/they) is a writer, musician, and librarian from California, occupying Tilhini, the Place of the Full Moon, the unceded territory of the yak titʸu titʸu yak tiłhini tribe. His poetry has been featured in Hoax, Redivider, 14 Poems, and DEAR Poetry Journal, among other publications and his chapbook “Teems///\\\Recedes” which Chen Chen called “a gorgeous abundance” is out from Kelp Books. Caleb’s debut solo album Ramon, a queer rock opera based on the Beatles song “Mean Mr. Mustard,” is out on Kill Rock Stars, and he is a PhD candidate in Creative Writing at Bangor University in Wales. Caleb also owns and operates the SLO Book Bike, a queer-owned, bike-powered, pop-up bookshop in San Luis Obispo, and works as a librarian at Cal Poly State University.

I was always falling into a particular type of love. Some might call it something like crushing, but I insist that it was love. A certain yearning, familiar to many queer people: falling for the straight boy/girl. That implausible want that somehow, in fleeting moments, feels possible. In the late summer of 2007, on tour in the UK with my best friends in the world in the indie-folk band Port O’Brien, I fell in love, deliciously, twice. Of course these brief affairs of the heart both occurred at music festivals: we played Bestival, on the Isle of Wight (a horrible set in the middle of the day — what were we, a ramshackle and poorly rehearsed neofolk band from California, doing: playing at a largely electronic festival headlined by the Beastie Boys?), and again at the End of the Road Festival — a bucolic and Wordsworthian weekend, in the English countryside, where we played two magical sets and where I met a boy I followed around like a lost dog for a weekend. It’s this latter story that I’ll relay here.

His name was William. I remember exactly how we met: I saw him, fell madly in love (his face, his hair, his eyes, his accent, his being) and struck up a conversation. I had an ace card to play, afterall: I was in a fairly well-hyped indie band from a far-away land. I was on tour. I was 24 and sort of attractive, but more importantly, for a brief, shining moment, I had status. We started talking about music. We meandered. We drank bitter ale and cider. We discovered the so-called “secret stage,” hidden in a grove of trees, where bands would randomly convene and play unannounced sets for those in the know or the merely lucky. No one was playing when we found it, and so William demonstrated his piano chops, playing a few runs of Yann Tiersen (Amelie — it was the middle 2000s afterall) and my love deepened exponentially.

I don’t exactly understand or remember how it came to pass that we spent an entire day and night hanging out. All I knew was that this absolutely beautiful man was all I cared about (really — I would have ditched the band, and stayed in the UK forever). When we ended up in my lodgings later that evening (a teepee that the festival had given the band to stay in) he picked up somebody’s guitar and said “do you like Burt Jansch?” Of course I did — everybody did in the summer of 2007. He played me a song. I swooned. We drank more. The night deepened and we talked for hours. And then it happened.

Of course I did. I have never been the type of person who has serious “game” and I’ve never really particularly cared about that. But I’ve always been a fan of falling madly in love with beautiful strangers. And this was, perhaps, my favorite instance of that. A perfect arc, in the perfect setting, with the perfect bloke.

When we got back from the UK, I was still thinking of him from time to time, and I wrote a song, which I called “William, It Was Really Something,” a riff on the Smiths classic “William, It Was Really Nothing” (oh, how clever I thought I was). All these years later, working on my latest batch of songs for the Soft People album Absolute Boys, this song made perfect sense to resurrect. The album is about longing, and is ostensibly several portraits of this exact type of longing — the classic gay/straight romantic friendship — the awkward, bittersweet encounter between a gay man and a straight(ish) man, that seems to have become a bit of a trope.

How many novels and poems I’ve read that beautifully treat this subject, the most recent of which was a poem called “Around Every Circle Another Can Be Drawn” by Eduardo Corral in his collection Guillotine. The final four lines read:

For years, I desired a man who didn’t desire me.
He was gentle with my lust.
(I never thanked him. I’m thanking him now.)
But once, in a splinter-rich booth, he held my hand.
A kindness I can’t forgive.

Here Corral very successfully transmits the complex and contradictory feelings of this particular type of queer longing: the strange negotiation between two men, engaged in what is essentially a romantic friendship for one but is infused with desire for the other.

In this incarnation of “William,” my husband and I, who I fell very in love with only a couple of years after The End of the Road, in the Spring of 2009, wanted to honor the original intent of the song, but give it a treatment that felt more in-line with the type of music we make in Soft People. Musically, we tried very hard to combine some elements of Sonic Youth’s more glossy output with the narrative sensibilities of the Magnetic Fields.

I don’t know if it worked.

But hopefully we caught some of the magic of the moments I attempt to describe.

Songs are like poems, I think, of a particular form. The lyrics and music of “William” attempt to do the same thing that many poems attempt to do, which is to trap a moment or a thought or a feeling in amber — to catch it and preserve it and to allow others, or even just one’s self,  to extract a bit of it, far into the future — and then to resurrect it. This collection of songs, and “William” in particular, is an attempt at trapping longing. This is not novel or new, of course. It is distinctly queer. From K.D. Lang’s “Constant Cravings” to Moses Sumney’s superb elegy to romantic friendship on “In Bloom,” queer songwriters, poets, novelists, visual artists, and filmmakers are masters of longing. And they always have been.

Sumney almost perfectly encapsulates queer longing in the lyrics of “In Bloom,” but, perhaps the difference between a purely poetic expression of that desire, as in Corral’s poem, and in pop lyrics like Sumney’s, is in his playful and metric approach. This is perfectly delivered in these two fragments from Sumney’s song:

In my heart, in my chest
Six feet beneath the flesh
When you held my hand
But you sighed BFF…

Consider also this fragment from Sappho, a (likely) queer poet from ancient Greece who fucking gets it:

I wanted to remind you
of all the exquisite days
we two shared.

When I came across this fragment, in Willis Barnstone’s The Poetics of Ecstasy, I knew exactly what she meant. I instantly recognized and connected to that particular feeling — of love being over, but of still holding on to memory and further, of wanting to share it with your lost love —  that Sappho recorded in these lines 2000 years ago.

The beauty of unrequited queer longing comes from the deep emptiness that lies at the heart of any unrequited love. I don’t mean to suggest that this is only a queer experience — it is not. But there is a certain slant of this experience that is distinctly queer. It’s the same deeply sad beauty that permeates novels like Andre Aciman’s Call Me By Your Name. It’s the recognition that the real beauty of the romance is that it must end; otherwise it wouldn’t have existed in the first place. If the flame was allowed to keep burning, it would eventually cool to embers, alchemically transform into something more mundane. Perhaps not less beautiful, but certainly less alluring in its lack of that exquisitely melancholic feeling.

For the poet, or songwriter, though, this love does last — in memory, trapped in amber. A song or poem has the capacity to transform an impossible love into possibility. In this way art becomes probability moving in reverse: absurd and beautiful and joyful and sad, but nevertheless an opening up, like a flower: something closer to yes than no.

In the closing lines of “William” I sing:

Oh Will, I thought that it was nothing
Till I woke up in my empty bed
And realized that I could still see your eyes
Somewhere in the back of my head.

Wherever William is now, I hope he’s happy, healthy, and doing well. In some strange, other universe, perhaps we’re still walking around the Dorset countryside, the sounds of Yo La Tango and Super Furry Animals bleeding into the blue softness of a September afternoon.

Caleb Nichols (he/they) is a writer, musician, and librarian from California, occupying Tilhini, the Place of the Full Moon, the unceded territory of the yak titʸu titʸu yak tiłhini tribe. His poetry has been featured in Hoax, Redivider, 14 Poems, and DEAR Poetry Journal, among other publications and his chapbook “Teems///\\\Recedes” which Chen Chen called “a gorgeous abundance” is out from Kelp Books. Caleb’s debut solo album Ramon, a queer rock opera based on the Beatles song “Mean Mr. Mustard,” is out on Kill Rock Stars, and he is a PhD candidate in Creative Writing at Bangor University in Wales. Caleb also owns and operates the SLO Book Bike, a queer-owned, bike-powered, pop-up bookshop in San Luis Obispo, and works as a librarian at Cal Poly State University. 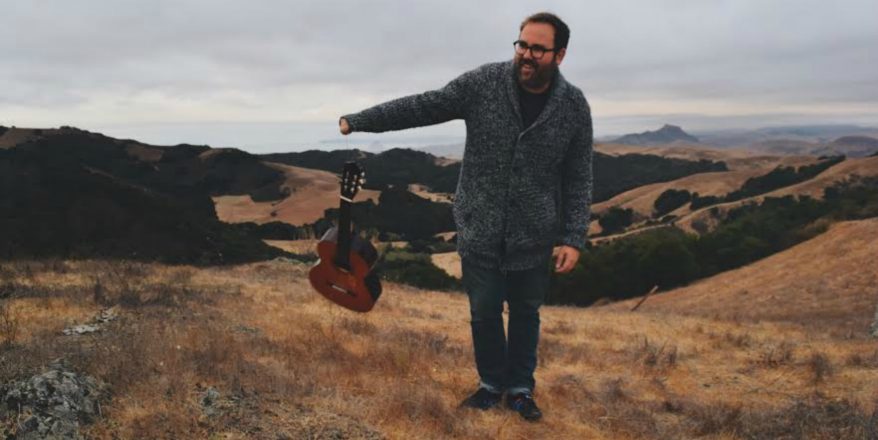