Caleb Nichols is a queer poet and musician from California and is one half of the indie pop band, Soft People. His poetry is forthcoming in Redivider and has been featured in Brain Mill Press, Inklette and elsewhere. His poem “Ken” won an Academy of American Poets University Prize, and his first chapbook, 22 Lunes, is available from Unsolicited Press. His music has been featured on Out.com, Paste, and many other places. William is streaming everywhere on September 18, and Soft People’s second album, Absolute Boys, is out October 4.

“Death Might Be Your Santa Claus”
— Sermon by the Reverend J.M. Gates

It started as a joke — a way to humor myself in the back of the tour van, or maybe more accurately, to ease my own anxiety and make everyone laugh during those long stretches of nowhere. My obsession with Christmas music was a sort of funny gimmick, and I would flit around manically, cartoon-like, singing popular Christmas standards or turning my friends’ songs into Christmas tunes by altering the lyrics (personal favorite: the transfiguration of WATERS’ “O Holy Break of Day” into “O Holy Christmas Day”).

But, at some point, I discovered that there was something like depth beneath this little routine of mine. Perhaps because I overexposed myself to these gaudy commercial anthems, I was able to dig beneath their glossy veneer and uncover a deeper pathos of melancholy, longing and, ultimately, existential substance. In a year that has been the darkest on record for many of us, this is where the music of Christmas sits with me now: a melancholic flame in a wide field of loss.

My husband lost his mother this year — in that thick evil that was the summer of 2016.

My husband lost his mother this year — in that thick evil that was the summer of 2016.  It wasn’t an expected death; she was only sixty-two, in good health, and on vacation when it happened. An accident while backpacking the Swiss Alps. An almost ridiculous way to die and a death that left us senseless and reeling in its unsettling strangeness.

It was during this process of grieving — of clinging to each other — that I began sifting through the detritus of the last couple of years of my songwriting and recording, perhaps as a way to cope. I stumbled upon a recording I’d made during the sessions for my 2015 album Double Mantasy, a well-made but barely listened-to long-player that was intended as a queer exploration of John Lennon’s Mr. Mustard character from the Beatles Abbey Road LP (1969).

The track, recorded two years before my mother-in-law’s death, was equally devastating and healing to listen to. It was called “(I Fell in Love on) Christmas Day” and was my attempt at contributing something earnest and heartfelt to the hypothetical American Christmas Songbook. I had forgotten about it, and the lyrics — which are a narration of the very mundane experience of driving through a holiday-infused suburban landscape and an exploration of what it might mean to sustain a loving relationship — felt so much more poignant in the face of our loss. I had written this song almost completely autobiographically: it was about driving with my husband to her house, to spend the holiday with her, and now, of course, she was gone. And this loss gave the track new, perilous depths. Instead of chronicling a humdrum drive through suburbia, the song now captured a moment in time that can’t be recaptured, at least for us. It represents a moment that is just irretrievable now; lost forever.

Christmas music has become fascinating to me because of the strange power it has to evoke deep feelings and nostalgia in people.

But nothing is ever really lost, is it? Christmas music has become fascinating to me because of the strange power it has to evoke deep feelings and nostalgia in people. It has a unique ability to transport us to the long lost places of childhood. For example, the sound of 1963’s “Little Saint Nick” by the Beach Boys is as able to transport me straight back to 1988 as the salted, chemical taste of a McDonald’s French fry. And I think this is due in part because this songbook — the American Christmas Songbook — is one of our last common cultural vernaculars. Everyone knows the music and lyrics to “Jingle Bells,” “Winter Wonderland,” “White Christmas” (or “Blue Christmas”) or, more recently canon, Mariah Carey’s classic 1994 track “All I Want for Christmas Is You.” Different releases evoke different feelings that sort of form an emotional garland around the same tree: from the boozy schmaltz of Ella and Elvis, to the coked-out highs of 1987’s A Very Special Christmas compilation, to the more sacred-sounding and spiritually connected LPs of Christmas music that John Fahey produced.

In previous decades, bands covered each other as standard practice. The Beatles singing the Shirelles’ “Baby It’s You” (1963). The Mamas and the Papas singing the Beatles’ “I Call Your Name” (1964). The Byrds doing Bob Dylan’s “Mr. Tambourine Man” (1965). Mott the Hoople recording the Youngbloods’ “Darkness, Darkness” (1971). Our current pop music milieu, by comparison, is a far less cross-pollinated ecosystem. Today’s bands and pop stars (and the systems that promote and disseminate their content) seem intent on leaving their mark as the authors of only original compositions, with nods to their contemporaries’ catalogs seemingly few and far between. In this context, the tradition of recording and performing music from a common patois feels revolutionary and fresh. Even with a slick sheen of industry sleaze and greed, the melodic structures of these tunes have the power to evoke certain ancient-feeling emotions in listeners that transcend commerce (perhaps) and recall sensations of warmth, of light in the dark, of communal huddling in the face of a long dark winter or season of death.

I think that John Lennon must have had similar feelings about the meaning and power that this tradition of songwriting brings to the table.

And perhaps this is how many of us might feel about some of this music at the end of what can only be described as a dark year. Will we listen to David Bowie and Bing Crosby’s 1982 version of “Peace on Earth/Little Drummer Boy” with less irony, perhaps?  I probably will.

I think that John Lennon must have had similar feelings about the meaning and power that this tradition of songwriting brings to the table. His classic 1971 track with Yoko Ono, “Happy Xmas (War Is Over),” is an un-ironic incantation of the Christmas spirit with a specific purpose: to remind listeners that peace is indeed possible if peace is what our society, as a whole, truly intends. It wasn’t until after Lennon’s murder, just before Christmas 1980, that “Happy Christmas” peaked on the UK singles charts, his death seemingly a bonfire that the world could huddle around.

My mother-in-law was, like millions and millions of people, an avid fan of the Beatles. She and I shared a common bond through the way the music of the Beatles saw us through dark and difficult times during early adolescence — for her the early loss of her own father, for me the difficulty of growing up gay in a small town in the early ’90s.  My own dedication to music — my practice of songwriting and my inclination towards certain fandoms— is probably derived from this experience, and is echoed in my regard for this Christmas music, this light in the darkness, as I’ve described it.

This year, our family will sit around the table on Christmas Eve, as we do every year, donning paper crowns and enjoying the glow of each other’s company, but there will of course be a profound and deeply sorrowful absence at that table. Perhaps we’ll find some relief though, as in the silent, awkward moments that are sure to arise, some comically saccharine Christmas jingle permeates the atmosphere and reminds us that, at least, we’re with each other in the dark.

Caleb Nichols is a queer poet and musician from California and is one half of the indie pop band, Soft People. His poetry is forthcoming in Redivider and has been featured in Brain Mill Press, Inklette and elsewhere. His poem “Ken” won an Academy of American Poets University Prize, and his first chapbook, 22 Lunes, is available from Unsolicited Press. His music has been featured on Out.com, Paste, and many other places. William is streaming everywhere on September 18, and Soft People’s second album, Absolute Boys, is out October 4. 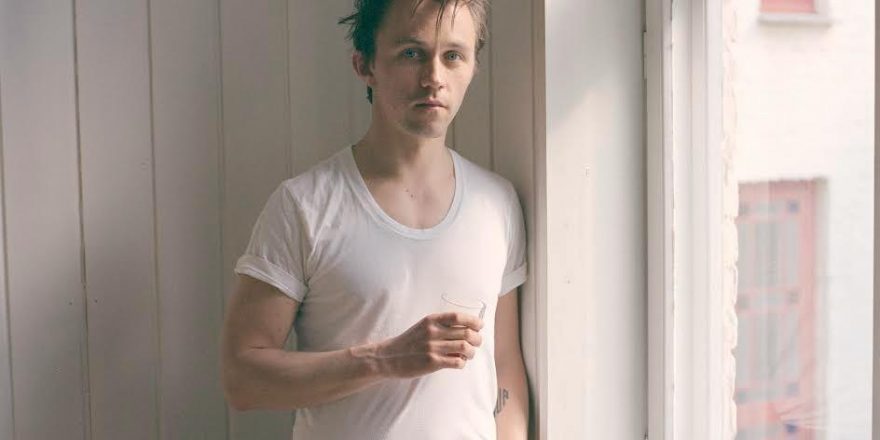