Aron Eli Coleite is the showrunner and executive producer of Daybreak, which premiered on October 24 on Netflix, starring Matthew Broderick. Aron is also the Executive Producer of Locke & Key, an adaptation of Joe Hill’s graphic novel, premiering on Netflix in 2020. Previously, Coleite worked on Season 1 of CBS’ Star Trek Discovery where he received a Saturn Award and a Hugo Nomination for his work. He got his start on the acclaimed NBC series Heroes and on the feature side, he recently adapted the iconic, best-selling graphic novel Amulet for 20th Century Fox with Temple Hill producing. (Image courtesy Netflix / Starpix.)

I’m actually pretty pissed about it, if I’m being honest. Because shit … I feel like there is something pretty significantly wrong with me if I’m still hung up on not being invited to sit at the cool kids table. (If I’m still being honest, my high school didn’t really have a cool kids’ table like there is in television or movies. Nor were there especially cool kids. But I still felt somehow diminished and worthless because I was not able to sit at this table, with these kids, who did not exist.)

And the same is true today. Those same fucking emotions that dominated my everything when I wondered why people were staring at me when I was going from first period French to second period geometry (It was my hair, wasn’t it? Probably definitely my hair.) didn’t evaporate upon graduation, rather they buried themselves like a symbiotic tapeworm deep in my gut and have been feeding on all of the self-doubt I experience on a daily basis.

Over the past two years, I’ve been working on an apocalyptic coming of age series on Netflix called Daybreak. The show is absurd and surreal and deeply personal and it’s why I’m writing this essay — because every little bit helps in the age of peak TV, when we have to fight for every single eyeball. And if this brazen attempt to get more viewers for the show exposes some rather embarrassing personal details as well as a confession to just how petty my inner emotional life actually is, then it’s just what I have to do. I mean. I’m absolutely terrified to make such a confession.

This is probably a huge mistake.

So why the hell am I doing this?

The answer, I think, has a lot to do with why I felt the way I did in high school and why I feel the way I do today. And maybe by being a little bit specific about my own experiences, I might find something universal.

That’s certainly what I’ve tried to achieve in my series. I’m attempting to get to some modicum of real emotion by wading through the muck of my pain from junior high and high school. Like the time when a bully attacked me in the arcade at the Sherman Oaks Galleria. (He said he put his quarter on the Track & Field arcade game, and he most certainly did not.) This was before cell phones so there was no way for me to call my dad to pick me up early, so I spent the whole day hiding in the mall. (The juniors dress shirt circular clothes rack in the JCPenny is not heavily trafficked and provided an excellent refuge.) And while I am pretty adept at hiding — I still got beat up.

What I’ve realized over the past two years is a single conclusion:

I am not over it.

I am not over high school.

I’m a 45-year-old man. I have three children. I have a loving wife of 18 years. I own property. And I am still plagued by the insecurities of my teenage self. There are all kinds of fears that bring me back to those terrors. I notice who and who does not say happy birthday to me on Facebook. (Damn, I really am petty.) But the feeling really occurs under a specific circumstance that happens at least once a year.

The scenario is this. Maybe it has happened to you.

You say hello to someone you know, but they act is if they have no idea who you are.

This has happened to me with several people. (I am very conscious that the amount of people I say here will influence the way you perceive me, so let’s just leave it at several.) In the case of this essay, I am focusing on one particular human being. We met for the first time probably five years ago. Our children go to the same school. He knows my wife. We belong to the same temple. We are both writers. (Don’t try to figure out who this is … one of the above statements is a lie to throw people off the scent, because the essay really isn’t about this person, but rather it is about my own feelings — even though I do want the individual to read this and think it is them. I did warn you about my pettiness, yes?)

I meet this person in a social situation, which, already causes me a great deal of anxiety. When going to any kind of social occasion, I run through the normal paranoia like … am I wearing my “I’ve been on the elliptical and closing my rings on that dumb Apple Watch” jeans or am I wearing my “I have a deadline so I’m not going on the elliptical and I’m eating vanilla ice cream with chocolate syrup at 1 a.m.” jeans?

Does my my hair look weird?

Am I sweating from stress or is it hot in here and does my Malin & Goetz eucalyptus deodorant make me smell good or am I a walking advertisement for a day spa in Atwater Village?

There have been many social run-ins with this individual over the past five years. High holidays or the waiting room at a TV network, when we’re both there to pitch on different pilots or the silent auction at my kids’ school where we both stalked out a rare photograph of Elliott Smith. (Again, one of those is a lie to protect the identity of this someone.)

Usually my wife will say hello first. She’s really kind and actually brave. I love her. Then I will say hello. And he’ll stare at me (which I want to talk about more in a second), say, “Nice to meet you.” Meet you! MEET YOU?!? As if this was the very first time we have ever met. EVER. It is not. It is the second or the fifth or the twelfth time we have met. And yet this someone will stare back at me as if I was a complete stranger.

He has absolutely zero recollection.

Now you’ll say … Aron (That is the correct spelling of my name. One A. Which is a whole other essay of what that spelling has done to me for my entire life) maybe he really didn’t recognize you? Isn’t that possible? My answer is … Yes. Certainly. That is possible. My face changes. Weight I’ve gained. Weight I’ve lost. And I am always in some state of growing a beard. (It is either so long I’ve got a little “I’ve just joined a cult in 1976” vibe or it’s short where it looks like I’m just lazy.) I’m basically the human equivalent of that magnet game Wooly Willy, so yes — that might prevent him from recognizing me.

But on the other hand … Do you know how many Coleites there are in the world? Not many. Me. My wife. My kids. My brother. His family. My uncle. That’s like 10 of us. It’s a fairly unusual and unusual-sounding last name (which is a whole other essay about the psychological impact of having a last name that literally NO ONE CAN PRONOUNCE that should go along with my essay about having one A in my first name. When I was a kid, I seriously wanted to change my name to Mitchell. Just one word. Like Prince.)

Still. I say hello to this someone and they stare at me.

I want to talk about this stare for a moment. It’s a look that in a microfraction of a second says, “Why on earth is this person saying hello to me and how do they know my name when I have no clue who they are?” It’s a stare wherein their computer brain is going through the index of all the faces they’ve seen in their life to see if they know me and when the answer is quickly no — they stare right through me.

This act makes me feel unbelievably small for two reasons.

1) It makes me feel as if I am so incredibly insignificant that I never made an impression on this person. Not in the three million times I met him. My face (in various states of beard-dom). My personality. My unique last name. None of it registered.

2) I’m not actually mad at this someone for not recognizing me (well, sure, I’m a little peeved, of course), but I’m upset at myself for allowing myself to feel inconsequential. How could I allow myself to feel so petty and small? Shouldn’t I be better than that? There are real important problems in the world. True disasters. And I’m having a pity party for myself because this trash person didn’t remember my name.

I’m such an asshole.

This is what takes me back to high school.

I want to be seen. I want to be someone who will be recognized. I wanted Daybreak to launch on Netflix and secretly (OK, not so secretly.) get 100K Twitter followers or something equivalent to that.

So what’s the lesson here? How is this universal? Does this happen to other people? Do you feel the same when it does? I believe I thought writing would help exorcize my demons. I hoped writing a series about teenagers surviving high school would help me overcome my own self-doubts. That it would be cathartic and liberating and …

Because here I am. Still waiting to be invited to sit at the cool kids’ table.

Aron Eli Coleite is the showrunner and executive producer of Daybreak, which premiered on October 24 on Netflix, starring Matthew Broderick. Aron is also the Executive Producer of Locke & Key, an adaptation of Joe Hill’s graphic novel, premiering on Netflix in 2020. Previously, Coleite worked on Season 1 of CBS’ Star Trek Discovery where he received a Saturn Award and a Hugo Nomination for his work. He got his start on the acclaimed NBC series Heroes and on the feature side, he recently adapted the iconic, best-selling graphic novel Amulet for 20th Century Fox with Temple Hill producing. (Image courtesy Netflix / Starpix.) 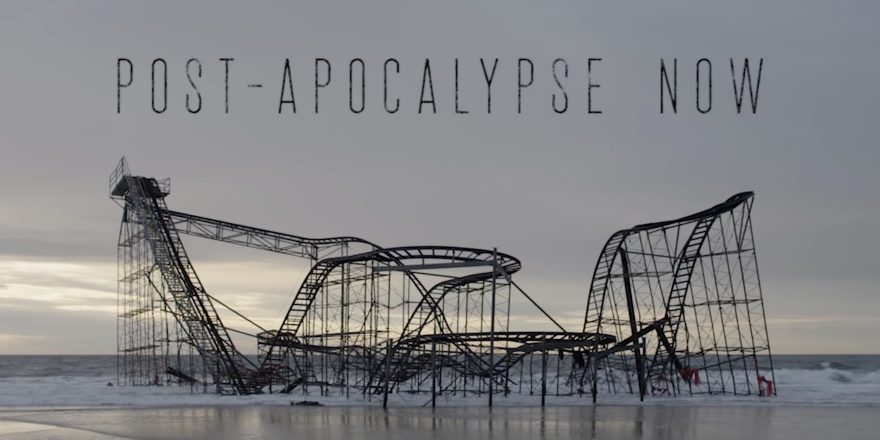