My debut fiction feature film #Like is now streaming on Apple TV, Amazon Prime and others – it has been a long road, and these feet are tired!

For me, the hustle never ends. I remember my first January in New York City. It was a snowy cold one and I was walking down St. Mark’s Place in my gladiator sandals to The Sockman. This was the late ’80s, when St. Mark’s was a center of badness and scandal, long before the Gap and swanky hotels moved in. I had just sold everything I had and flown in from London on a free courier flight, with £50 in my pocket and two pairs of shoes, my vintage baggy boots, and the aforementioned sandals. Two weeks into my relocation, I irreparably broke my boots. The solution? A pair of thick wool socks to get me through to my first paycheck, which was still four weeks away. I had just graduated film school at St. Martin’s College in London, and with my diploma and my U.S. passport in hand (I grew up in London, but was born in Cheyenne, Wyoming), I had decided to move to the States and try to get a foot on the rung of the filmmaking ladder.

There was no glass ceiling in the U.K. for women directors at the time, it was cinderblock. The only ones getting a look-in at the BBC and ITV were white, posh Oxbridge boys, and the film biz was not much different, apart from a few hardy working-class lads and a couple of plucky ladies who made a dent, like Rose English and Sally Potter. Despite being somewhat posh, I had a dead dad, an MIA mum and no money, so at 16 I had ended up going from boarding school to squatting in the tumbledown abandoned houses of Brixton, South London, during a tumultuous era. I joined a couple of bands, started making Super 8 movies with money scrapped together from my market stall, and did I feel lucky? Yes. I fell in with some amazing people, like Wire drummer Rob G, my first boyfriend; Terry and Rob Smith, the founders of the Brixton Housing Co-op, who became like family; and even the Brixton Fairies. Through all of them, I learned how to survive. And thrive. Figuring out how to be self-reliant and not waiting for permission. (I tell the story of this time in my next limited-series screenplay, The Squatters Handbook.)

Fast forward to my first year in N.Y.C., making jewelry at $4 an hour and meeting folks like Louie Lino (now a music producer), who helped me hustle my way into a downtown studio where they were filming Pee-wee’s Playhouse. At first, I worked in reception (that’s where they put us girls) and then I was “promoted” to being a runner. I met one of my best friends, Nina Crews, who grew to tolerate me and is now a celebrated children’s author with a ton of books under her belt. I hung in the runners’ pen with other pals who were smart, talented oddballs: Rob Zombie (who had a different last name then), the illustrator Mark Matcho and an older gent from South India who shared his powdered Tang with us during what Rob called our “astronaut parties.”

Another strong pull for me to move to the U.S. had been my love of hip hop. I had evolved through teen mod stylings and a love of retro ’60s girl groups to become a soul-girl, worshiping Steve Arrington, Junior and Lisa Lisa. When I saw Kurtis Blow play live at Dingwalls, that was it: I was now a satellite girl who ran with a little hip-hop crew out of Notting Hill, as they figured out how to flow. We were all more than a little in love with the South, South Bronx.

In N.Y.C., I kept shooting Super 8 and 16 mm after buying a Beaulieu from a handsome Alaskan boy I worked with. I hustled my way into making in-house sales videos for Bloomingdale’s, featuring supermodels like Christy Turlington and Iman, and creating Ralph Lauren and DKNY promos for peanuts. I took these and cut them to look like music videos, which I was laser focused on at the time. I made some music videos for friends and met the Hex crew: photographers Angie Hughes and the (in)famous Sue Kwon, who shot everyone from Jay Z, and the Dalai Lama to Slick Rick, directors Kevin Bray and David Perez Shadi (who directed House of Pain’s “Jump Around” video), David Daniel (great D.P. who coincidentally ended up working with Rob Zombie!), Evan Bernard (baller and director). They were a little clique of filmmakers and hustlers who modeled for me how to get into the game. Kevin Bray is a self-effacing guy from Detroit who directed a ton of music videos in the ’90s, and now mostly directs episodic TV shows. The last time I saw him was on TV with his wife Sophie at the royal wedding, where he was a guest of Meghan Markle. You’d think he came a long way, except for the fact that his brother dated Madonna and wrote her early hits.

But I digress … So when I saw Kevin directing videos for the likes of the Black Sheep, EPMD, and Eric B. & Rakim, I was desperate to get on. But because I was a girl – nope, not gonna happen. When I finally broke in, of course it was a woman, the fabled Sylvia Rhone of East West Records, who gave me my first break, directing a video for the Family Stand. I did multiple videos with them and became known as “that white English girl” who makes weird, cool shit. That work led to Ann Carli at Jive Records giving me the opportunity to direct a Fu-Schnickens video featuring Shaq – too much fun! And then some smart men came around, like Rodd Houston at Tommy Boy, who hired me to direct that “artsy” video for Queen Latifah’s “How Do I Love Thee.” Another great experience was working with the UMCs out of Staten Island, pre Wu-Tang, with Haas G introducing me as folks passed: “This is our director!” He is a class act. But still, it was a hustle. When I was up against men, I rarely had a chance in the masculine world of hip hop. Or if I did get the gig, it was super low budget. Finally, producer-manager Dominique Trenier said to me, “Girl, go knock on a door where they will let you in. You’re a blonde white girl, stop crying about Nas or A Tribe Called Quest not choosing you to direct their videos!” So, I picked up what he was putting down and recut all my videos and any other footage I had into 30-second spec commercials and looked for a rep.

Long story short, my plan worked and I kept squeezing in low-budget videos, when they would have me. One of my favorites was for Erule out of L.A. Bilal Allah, the video commissioner of Pallas Records, hired me. At this point no white bro had ever hired me to shoot anything, only asked me to meet them at 11 p.m. at their hotels to “discuss.” With Bilal, though, it was all business and respect. The Erule video was shot in South L.A. and the video had such a small budget for post-production I came up with a plan to double-expose the film in-camera (Super 16) and then rewind. It looked shockingly great, shot by an amazing D.P., and a true gentleman, Patrick Darrin.

At this juncture, I met a bunch of funny, fabulous A&R gals who introduced me to the Beastie Boy-in-chief, Adam Yauch. He liked my price, and when I said I would help him produce and direct a feature doc about the fundraising concerts his Milarepa Fund was organizing, Free Tibet was born. From that, I pivoted to doc TV work at Sundance Channel, Discovery, MTV, VH1, PBS and many more. Some of it was amazing (like shooting in Papua New Guinea for Nat Geo) and some, not so much; I faced more disrespect, gender bias and harassment in the hallways of corporate TV than in any nightclub, jam in the park, or record company.

After many life changes, I finally said to myself, “Time to focus.” I produced a movie from a short story I optioned (an early trans love story) and then turned my attention to making my first movie. After taking screenwriting classes and reading many books, I spit out a few decent scripts and went to work. Blood, sweat and a full-bodied red powered #Like out into the world, a story of internet predation starring the stunning Marc Menchaca (from Ozark, The Outsider and Generation Kill) and introducing the muscular acting chops of Ms. Sarah Rich.

If you think I’ve arrived … not even close. The most recent Directors Guild of America stats show that only four percent of studio pictures were directed by women, while the numbers in television are not much better. In recent years, the numbers have improved slightly, but women are still getting the short end of the stick and the only place to make a living in film and TV is directing TV dramas and studio pictures.

So, here I am beginning over again, thrilled that my film, which was made on a shoestring, has gotten some amazing reviews and is being released. And now I can hustle for a TV directing gig on some fabulous shows! But on January 26, I will be sitting front row with a martini and maybe some truffled popcorn, tuning into Apple TV. Hope to see you there!

Featured image shows Sarah Pirozek in Brixton (left), at a music video shoot in Milwaukee (center), and at a Q&A for #LIKE with actor Marc Menchaca (right). All images courtesy Sarah Pirozek. 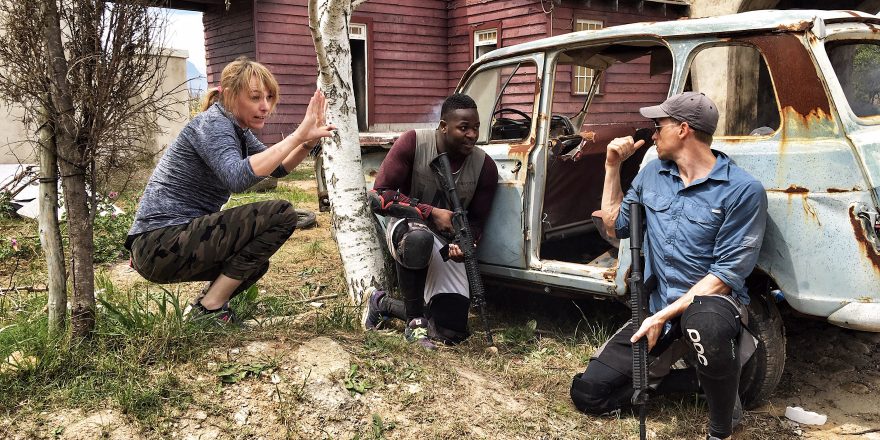 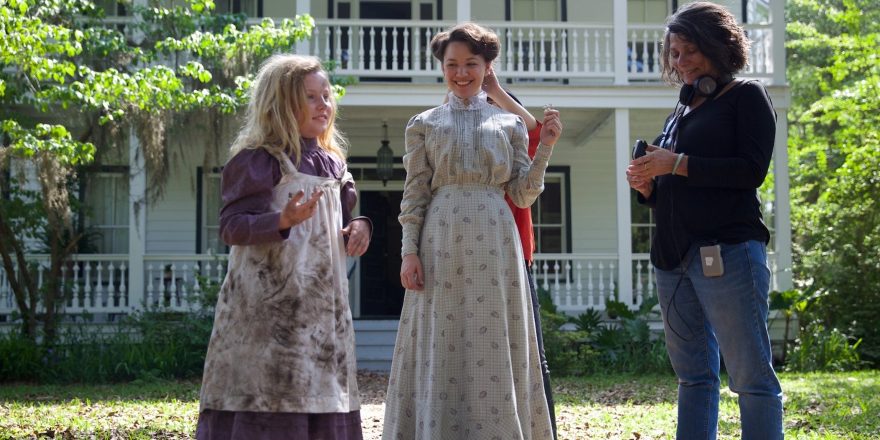 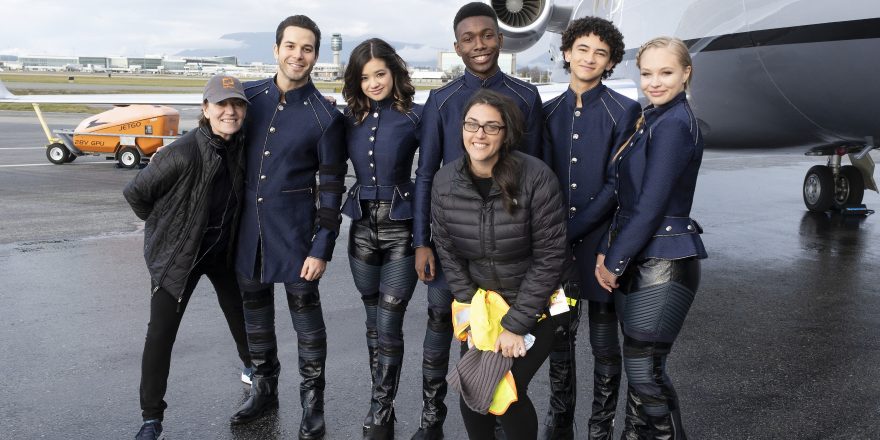 How I Rediscovered My Inner Teen at 40