The Blow
The Blow

Melissa Dyne and Khaela Maricich make-up equal parts of the Blow. The Blow has released a number of albums on K records and last fall released its self-titled album on the Brooklyn indie label Kanine. This is their website, and this is their Twitter.

Pretty much all we do, we being Melissa Dyne and Khaela Maricich of the Blow, is talk to each other all day long, about everything. So when the Talkhouse asked us to talk to each other about The Inevitable End, the fifth and supposedly final album from the Norwegian electronic duo Röyksopp, we were more than ready.

MELISSA DYNE: From the very opening of The Inevitable End, you can tell that Röyksopp is making a world and setting you up inside of it, the way Pink Floyd does. It’s not about singles all the time.

KHAELA MARICICH: Yeah, this double album is like a ride on a glossy European tour bus. It drives around in big spaces and drops us off at various locations. I’m not gonna lie, I mostly got on the bus because I heard Robyn was coming.

MELISSA: The album makes wide turns because it isn’t jamming into a pop-structure parking space all the time — it moves really wide. There is something about using a vocoder, like with Kraftwerk, Wendy Carlos, or Daft Punk, that makes it feel like the artist is making a world.

KHAELA: It’s expansive landscape music. Whenever someone tries to use vocoder inside of a three-minute pop song, it just comes off so corny, maybe because the scope of the song isn’t big enough. It’s almost like the persona of a pop singer is too prevalent, and vocoder doesn’t work because it comes off like a silly mask when a known star uses it. But when an electronic group whose members you can’t visualize uses it, what you imagine is robots singing, and it actually works. It’s refreshing to be inside of an album that isn’t about persona. And they aren’t doing some big branding of themselves as not being people, like Daft Punk wearing metal masks and claiming to be robots. They just seem like quiet dudes.

MELISSA: There are some bands that I can only really listen to in a car in the desert. It isn’t necessarily dance music or even downer music. It’s just not overly relenting, it’s reflective. Some might say smooth, but I’m using that terminology in a modern way. Whenever I listen to Yo La Tengo in the car, I think about my life a lot. It’s not pushing a character or an ego at you. Kanye West or Beyoncé won’t leave you alone — they’re like, “I’m Kanye West! I’m Kanye West!”

KHAELA: The bus doesn’t feel super-full. On the first listen through this album, I’ll admit I did feel a little lonely, like, “Where are all the Swedish women?” But you’ve totally sold me on the spaciousness of this landscape. I came to trust them as a band and as drivers without really being able to see who they are or identify their personalities.

MELISSA: To me they seem very sentimental for people who have such controlled production. Their engineering skills are obviously so precise, this could have ended up sterile and mathematical. But for a couple of robots they seem like they can get their feelings hurt.

KHAELA: For me, the bulk of the album is about looking out the window and experiencing the sounds slinging past me at fast and slow speeds. The analog-sounding bass and synth lines are warm and forceful and I was happy to just go with them. “Skulls,” “Sordid Affair” and “Something in My Heart” are all rolling songs, and they create distinct spaces that are able to expand and contract into each other; they feel like a consistent place.

MELISSA: Somewhere around “Save Me” it’s like the bus pulls over because everyone’s asses are asleep, and they drop us off at a Euro club and we’re all forced onto the dance floor.

KHAELA: I really didn’t want to go there. I swear they left us there for hours, but it was, in fact, only one song. Sometimes listening to the electronic style of a song like “Save Me” makes me feel very much from the United States. Remember when we were in Vienna having breakfast at a bakery café and there was that children’s birthday party upstairs where they were jamming techno music? It was children’s techno music. Like they wean people onto it very young over there.

MELISSA: And they’re highly educated on the form by the time they are our age.

KHAELA: Luckily, right after “Save Me” is the song “I Had This Thing,” which is like the party is almost over, and I get to do a little dance alone on the floor, then guest singer Jamie Irrepressible takes us back to our safe space.

MELISSA: And then they slowly drive us to a Vangelis concert. Which helps me understand where the strings were coming from earlier in the album.

KHAELA: The one song where I had no idea where we were was “Running to the Sea.” It has all the requisite elements of an electronic music single, but no part of it really gets to me. The wide space of the production was appealing enough, but I was wondering why that woman, Susanne Sundfør, had to be there making noise in the middle of it.

MELISSA: Yeah, there are a few moments of the album where it maybe seems a little bit predictable, maybe because this is a style that they helped to popularize, and it’s now so prevalent. Then there are moments where it feels pretty genius. It’s like you see someone reaching towards the pop altar, wanting to give the audience the thing they think they want, what everyone wants in the club. But there are other times where I feel like they’re popping wheelies and aiming for a more dynamic structure for the album.

KHAELA: The alternate version of “Do It Again,” their collaboration with Robyn, that they included on this album is a special moment for me. It feels so much realer and wilder than the original, and probably more popular version that came out prior to it, with the amazing weirdness of the canned bossa nova beat and the underwater synth garden. It makes me want to cry a little bit and shake my torso. It feels like it’s doing something new and special.

MELISSA: I am kind of over the vibrating EDM bass of the original. Obviously they’re good at it, but that sound is becoming like wallpaper.

KHAELA: That sound is totally going to be the signature sound of the 2010s, the way that one jazzy bass line with trumpets is the signature of the mid-’60s, or how saxophones scream “’80s!!!” That EDM bass appears to be the only sonic development we’ve had for a while, and people seem afraid that nothing else is going to come along, like it’s the sound of a future that we don’t want to move past.

MELISSA: But it really seems like Röyksopp is working to push past the tropes with this album and experiment in a different direction. You know how when you listen to Journey and you can tell that guy just loves to sing? These guys obviously love to produce and engineer; you can hear it. And they still sound cutting-edge because they seem to love learning and developing, they’re not stuck where they started.

KHAELA: One thing this album definitely did was make me want to be best friends with Jamie Irrepressible. I didn’t sign on for him, but every time his voice came in, like on “Compulsion” and “Something in My Heart,” I immediately felt a kinship with the song, even if the production wasn’t immediately my jam.

MELISSA: Yeah, something that is fascinating with this album is that way that they’ve used not only the rotating cast of performers, but the locations in which they’ve placed their vocal performances. They’ve created a super-consistent sonic environment, and it’s so consistent that they can change the placement of the lead vocals without pulling me out of it. In most popular music, the vocal is absolutely prevalent, but they’ve managed to stabilize the sonic atmosphere in a way that feels cohesive. I trust their skills, even though normally, changing the vocal placement would rip me out of the record and make me feel like this isn’t an album, but rather a string of singles.

KHAELA: They’ve gone out of their way to talk about this project as being their last full album. Maybe they’re tired of making worlds. Maybe the responsibility is too great.

MELISSA: To be master of the universe.

KHAELA: Or maybe they’ve just made enough of them. Or maybe they’re not making worlds, they’re just discovering them, and they feel like they found them all.

MELISSA: They have a gravitational style, they’re able to be really heavy and pull you in and make it clear, whether it’s minimal or maximal. Which is a very hard thing to do.

KHAELA: Yeah, they took us there.

The Blow
The Blow

Melissa Dyne and Khaela Maricich make-up equal parts of the Blow. The Blow has released a number of albums on K records and last fall released its self-titled album on the Brooklyn indie label Kanine. This is their website, and this is their Twitter. 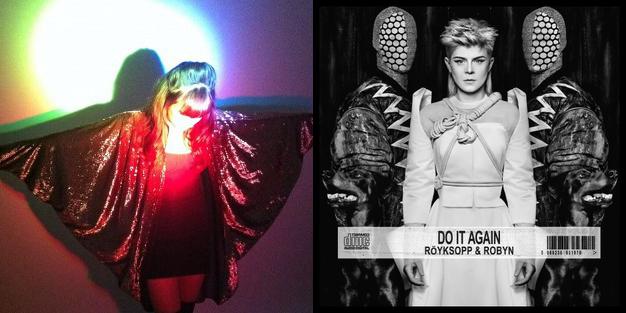