I am in Little Rock, Arkansas, on a treadmill, when I first listen to Deerhoof’s latest album.

I’m walking fast: 4.1, whatever that means. There are three television screens in front of me in the “Cardio” room, all spewing black-rectangled closed-captioning: 1) The View. No, The Talk; 2) ESPN Sports Center — my god, it’s football time; 3) That Mother sitcom with Neil Patrick Harris.

From the first guitar squawk and Satomi’s opening words on the album, La Isla Bonita fits into the rest of their prolific catalogue. (Yessss.)

I am running, against my will, mostly because I’m a puppet of the music.

Sara Gilbert. Really, Sara Gilbert? She is talking relationships with these other heavily made-up ladies, effortlessly omitting the gender of the horrible exes she’s talking about. “Jennifer Lawrence was quoted as saying….”

Thankfully (thank you, members of Deerhoof!) the soundtrack is this gorgeous cave of guitar trills and shuffling snares.

Satomi and Greg sing (“Mirror Monster”):
WE ARE RIDERS IN THE CAVALRY
WE WILL SOON BE THE VICTIMS OF OUR IMITATORS

Deerhoof was the band that slapped me with the truth that a rock band could be anything I wanted it to be (so I’d better quit whining about record labels). Any tempo, any sonic texture, any word, any varied form of humor (musical, lyrical, or otherwise). Any subject, any object. (Basketball.) Any level of insanity (musical, lyrical or otherwise).

Deerhoof was, and still is, an impossible combination of things. A short woman with a Japanese accent laying down bass lines that shake tushes while sing-songing dadaist adult nursery rhymes. An inarguable genius of a drummer who presses up against the beat just to see how late or early he can hit before the whole groove collapses.

Satomi sings (“Last Fad”):
BASEBALL IS CANCELED
E.T. IS RUNNING LATE
NEW FROM AMERICA
I COVER ALL OF THE WALLS WITH SAD DOLLARS
TA-DA!

In La Isla Bonita, I can’t tell John and Ed’s guitars apart. It doesn’t matter, I don’t think; the two of them serve the music before their egos. It’s the Television-like weave. It takes up sonic space when a song deserves a shock of color, or shrieks riffs when it’s time to drive forward. A two-headed, million-fingered guitar-playing organism sharing the same heart and guts and gore.

Ad for pizza with crusts stuffed with more pizza. Ad for shrimp in three forms on top of a steak. Ad for a hormone that shrunk that lady’s stomach three sizes.

When I started playing rock shows I couldn’t believe how many people I got to perform for. Compared to the scant number of puppet-show attendees I was used to, there was so much attention and energy from a rock audience. We were all creating an unpredictable, spasmodic energy zone together. I felt the huge potential of that magical combination: hard-hitting words, sound that could sear your nerves, and bodies upon bodies. I’d never felt so powerful in my whole life. The ground might shift. The world might change. And most importantly, our band might be a band like Deerhoof. We might tour the world and be on a record label and make music that would blow people’s minds.

Or I might eat corn chips three meals a day in the back of a Chevy and spend years of my life pissing off beer-drinkers at open mikes. Only time would tell.

Satomi sings (“Big House Waltz”):
LADIES AND GENTLEMEN, DEERHOOF WOULD LIKE TO BRING CHAOS TO YOU
PLAY YOUR EARS
LET THEM GO FREE, FEEL IT
TURN IT UP 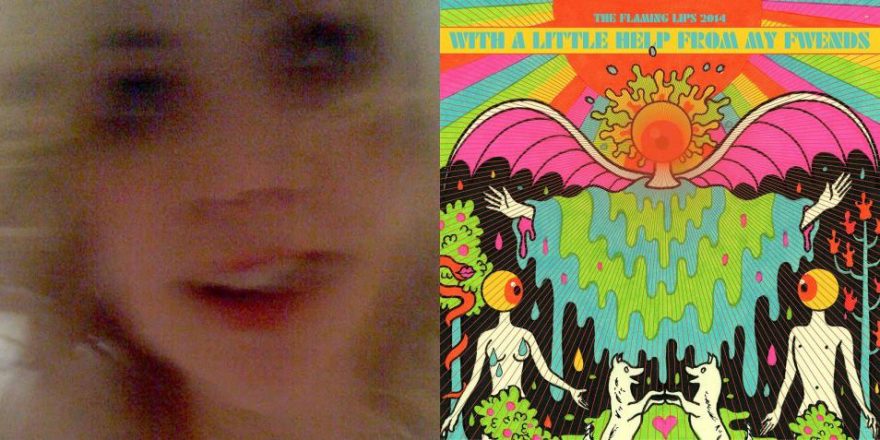