Alphaville is a 1965 science-fiction film by Jean-Luc Godard, the French New Wave auteur best known for inventing the jump-cut and hipping the world to the charms of Anna Karina. Although it takes place in a noir dystopian future, the film was shot in real locations around Paris. No special props or sets were used; instead, the city’s new modernist glass and concrete buildings, presented exactly as they were, stood in for the landscape of the urban future. “Reality is too complex,” intones the super-computer Alpha 60 at the beginning of Alphaville, “what it needs is fiction to make it real.”

In cinephile circles, Alphaville is often cited as an example of how a filmmaker’s singular vision — and some clever framing — can help suspend disbelief to the point that it transforms the familiar into its opposite. To me, it’s always felt like an example of science fiction’s most inalienable truth: that it will always reveal more about its present than our future. In Alphaville, the future is set in the present day, and Godard shows with grace how they can coexist, if not how they must coexist, each day, in order for the fabric of reality to hold together.

When I first heard the Rentals, the band fronted by former Weezer bassist Matt Sharp, I was a teenager in the heady early days of peer-to-peer file sharing. I spent hours in my bedroom, after school and into the night, maintaining a middlingly popular Weezer fansite and downloading mislabeled mp3 files on Napster and Soulseek. Files of Weezer, the Rentals or other Weezer-related offshoots, like guitarist Brian Bell’s limply experimental Spacetwins. Or drummer Pat Wilson’s Special Goodness, a band for which I have, somewhere in a box in my house, an actual, physical fan-club card.

Whenever I hear “My Head Is in the Sun,” from the Rentals’ second album, Seven More Minutes (1999), I am instantly transported into my adolescent body; shaggy-haired in an Ozma t-shirt and flip flops (Ozma being a band best known for once opening for Weezer), sucking face with my first boyfriend in the sand in Huntington Beach, a year after we started trading messages on a Weezer message board, before graduating to AOL Instant Messenger and physical letters.

In 2014, I am an adult human woman, and the Rentals recently released their first full-length record in 15 years, Lost in Alphaville. Whether by intent or coincidence, it dovetails with the release of the latest in the parade of Weezer’s many assaults on their past, Everything Will Be Alright in the End. This means that — for the many people who were imprinted with this kind of music at a formative age — the past, present and future are collapsing into one momentary entity. In 2014, of all places.

Lost in Alphaville, as an experience, is disembodying. Ol’ Ozma t-shirt feels instantly at ease, swimming in the familiarity of the sound: flowery assaults of Moog and the coo of dulcet female voices (once Rachel and Petra Haden, now Jess Wolfe and Holly Laessig). The adult human woman knows she’s a different person now, the kind for whom reckless nostalgia is a diversion not too often permitted; she’ll likely never listen to this album again. For anyone not weaned on this stuff, I cannot speak to or even imagine your experience.

This effect is compounded by the album’s singular interest in time. The rough conceit of Lost in Alphaville is that Sharp returned to Barcelona, where he was living when he recorded Seven More Minutes, the second Rentals album. Seven More Minutes is not a great record, but it very distinctly speaks to a moment in Sharp’s life — red wine, a crew of Britpop collaborators, in love with a Spanish woman, etc. —which likely has the nostalgic or emotional impact on Sharp that his own early records have on me. In returning to Barcelona, he feels struck by the passage of time. He’s older, and Barcelona, like every city on the planet, has kept on existing even while he’s been away.

Seasons, decades, entire phases of life have passed, but Barcelona remains the same. Sharp strolls the streets, a world of unfamiliar faces which haven’t aged a day. “There must be a factory,” he sings on “Song of Remembering.” As far as initial precepts for an album of music go, I find this one fairly unimpeachable.

In 2006, I went to see the Rentals in Portland, Oregon. It was a nostalgic impulse. I’d just graduated from college and I wanted to connect with something potent from my past, to see in what ways I had changed, and how much. On that tour, Matt Sharp was easing out of a brief singer-songwriter phase, serving up an onstage persona in wrist sweatbands that was half-jocular nerd, half-Fred Schneider in full sprechgesang. The divine Rachel Haden was in the band, a morphing satellite adjacent to Sharp himself. I loved the show, particularly their performance of the Weezer b-side “I Just Threw Out the Love of My Dreams,” and I came home drunk to search for the Weezer message board that once dominated my online social life.

Like Barcelona, it still existed. It looked unfamiliar — nearly a decade of changed usernames and shifting ownership — but the spirit remained the same. I was shocked that it still existed. Tentatively, I started a new thread, shouting into the cave to see if any voices remaining from the period of my deepest dedication might echo back. I hit refresh. Dozens of replies, avatars familiar from the farthest perimeters of my memory. People I’d corresponded with, physically pen-palled, AOL-messaged. All grown up, asking where I’d been. I freaked, slammed my laptop shut and never looked back.

Adjacent spins of Lost in Alphaville and Everything Will Be Alright in the End are enlightening. Sixteen years have passed since the forking of the Matt Sharp-Rivers Cuomo partnership, two years after Weezer’s last great album, Pinkerton. It has never been so obvious to me, listening to these two albums, that they complemented one another in some ineffable way. Without Sharp’s soaring aspirations and predilection for overt sentimentality, Weezer is baffling and emotionless. Without Cuomo’s ego as counterbalance, Sharp’s work with the Rentals can feel ploddingly self-indulgent, even anodyne. The songs on Lost in Alphaville are produced with care, the synths crashing like sine waves on a Spanish beach, but — like much of Weezer’s recent output — it takes no significant musical or lyrical risks.

Sharp’s allusions to science fiction are the most interesting thing to me about Lost in Alphaville, which feels like a bizarro version of Godard’s Alphaville — only transposed one click backwards, so that the sounds of the past, like the buildings of 1965 Paris, are supposed to represent the present. I get shit for citing this too frequently, but the science fiction writer William Gibson once wrote that the future is already here, just not evenly distributed. The same goes for the past, I would argue, if you look at it from the perspective of someone else’s tomorrow. The last song on Lost in Alphaville is called “The Future.” 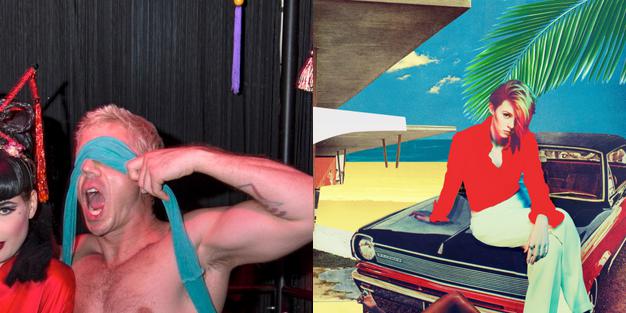