Talkhouse Film contributors and a select few friends of the site voted on their favorite theatrical releases of 2017. The results of the Talkhouse Film poll are below, showing all the titles that received multiple votes; a selection of individual ballots will be posted tomorrow. Ten points were awarded to first-place films, 9 points were given to second place, etc.; for unranked lists, each selection was awarded 5.5 points, the average of 1 to 10, giving each equal weight. 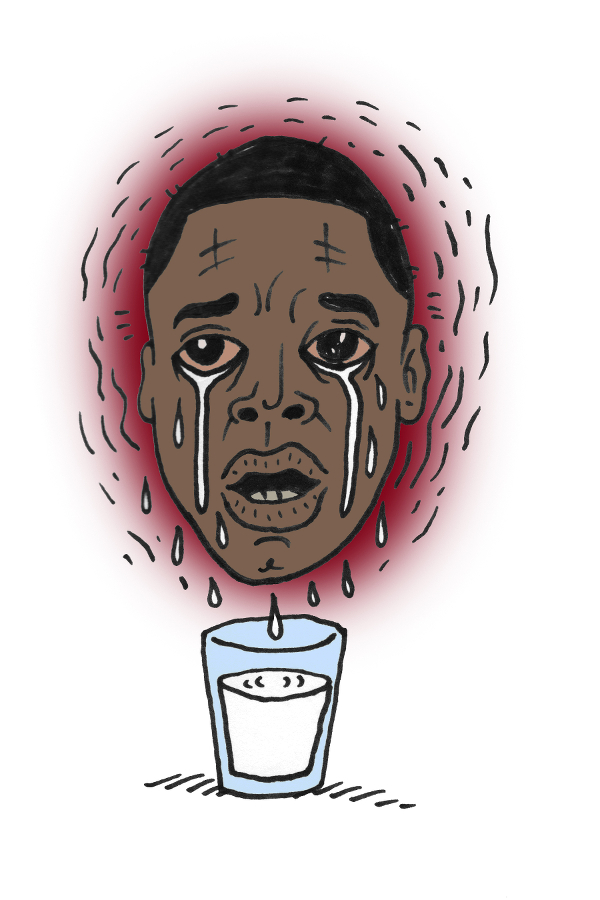 1. Get Out 324 points
“It is the rare film that truly radicalizes a genre, let alone an entire industry. Get Out did just that. It isn’t just a near-perfect film — disciplined, purposeful, metaphor-rich, playful and challenging all at once — but one that surprises (so hard to do in our jaded age), flaying open our hardened cultural and racial tropes with dazzling precision. In an era where movies pre-masticate every plot point and remove all mystery from the filmgoing experience, perhaps the most radical thing about Get Out is that it ever got made at all. This film demands your participation, the navigation of complex and conflicting emotions, and real intellectual effort — all while being a kickass ride at the movies. Get Out is the Richard Pryor of modern horror — in the future, we will all, in some small way, be influenced by this film’s delirious destruction of all that came before.” (Aisha Tyler)
Image by Zach Clark 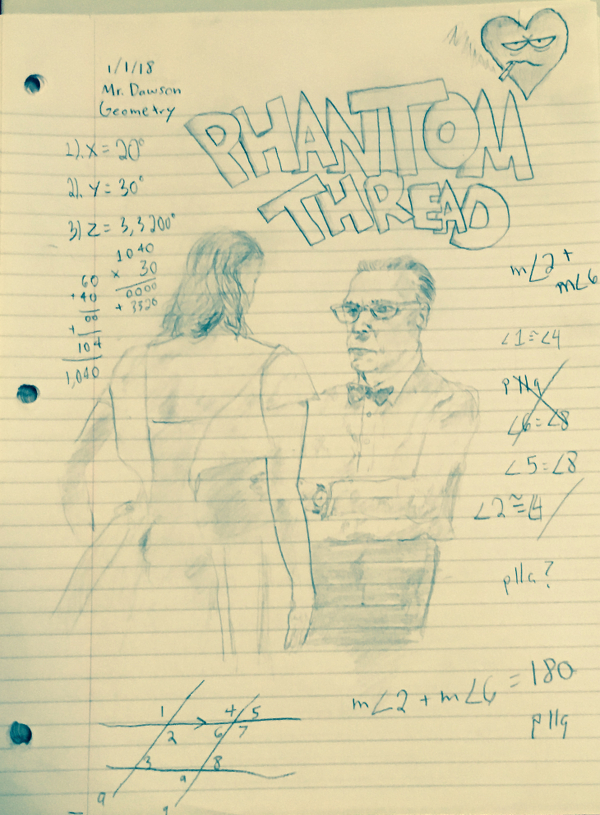 2. Phantom Thread 162 points
“Phantom Thread is not only a ravishing piece of pure cinema but it’s one of the best movies I’ve seen about an artist and his process: the control freakery, the seduction, the manipulation, the inspiration, the depression. It’s a movie primarily concerned with atmosphere and character, casting a spell without narrative contrivance and without (finally!) Daniel Day-Lewis devouring the movie he’s starring in and allowing Vicky Krieps (the find of the year) and Lesley Manville their space. The movie is funny and suspenseful but it ends up, for some, in a remote and perverse place, and though I bought the idea and I bought the execution I still felt a little disconnected from it on a first viewing–but it doesn’t matter: this is the most gorgeous movie I saw in 2017. I’ve drifted away from PTA in the last two decades but Phantom Thread is a jolting reminder that he’s one of the last great auteurs working on a grand scale in mainstream American film.” (Bret Easton Ellis)
Image by Jack Dunphy and John Cibula 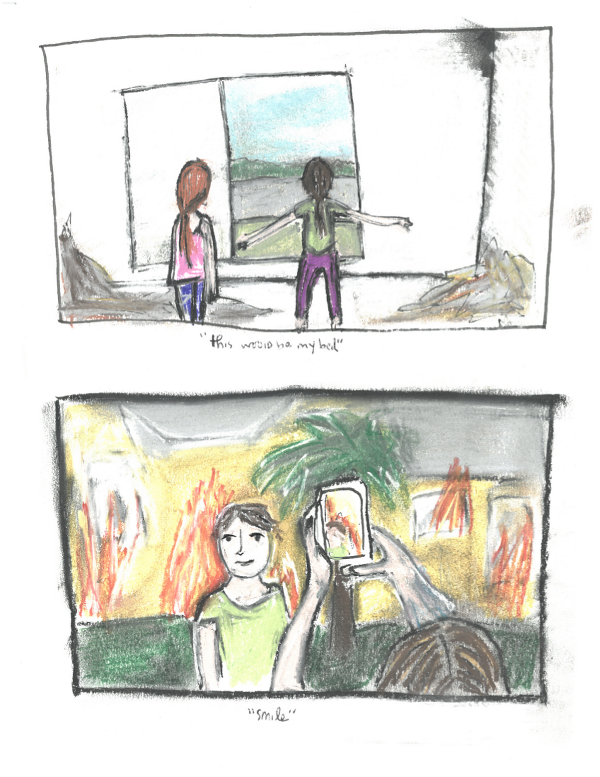 3. The Florida Project 161 points
“The blindingly purple Magic Kingdom motel is the set piece that shows the perspective of a child’s struggle with poverty. Sean Baker does something that is rare in cinema, and that is surprise us with a story we normally ignore. Being with Moonee and her friends in their Little Fugitive misadventures is a joy, but their heartbreak comes from Sean’s documentary attention to detail. In one scene, a child has to move and his father gives away his toys because they cannot fit in the car. It is a small example of Sean turning a scene that could have been melodramatic into a moment of actual sorrow. The film never wallows in the exploitation of poverty. It is a dignified portrait filled with soul. The film is shot in saturated anamorphic 35mm by Alexis Zabe, with images reminiscent of the documentary photographer Eugene Richards. The Florida Project has a way of sharing Moonee and her mom’s pain while letting us laugh. But we are never laughing at their struggles, we are empathizing with their pain.” (Joshua Z. Weinstein)
Image by Nikole Beckwith 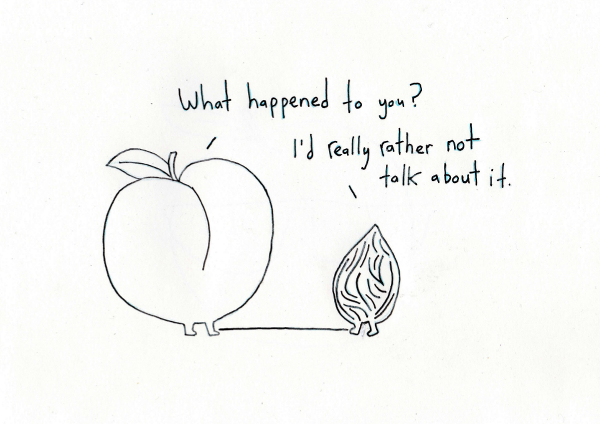 4. Call Me By Your Name 146.5 points
“Cinema’s gay love stories have long emphasized the forbidden and the transgressive as narratives with doomed outcomes: so-called societal violations get punished. I loved the surprising way Call Me By Your Name subverts these “this can not go well” anxieties. The film, delineating a nascent sexual epiphany, seems both intense and intimate, without an ounce of fat, but pulls off an emotional grandeur. Added bonus: Michael Stuhlbarg delivering one of cinema’s great “Dad” speeches.” (Luke Davies)
Image by Jim Strouse 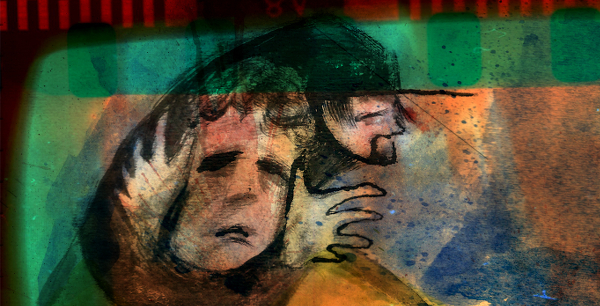 5. Good Time 132 points
“Good Time is a masterclass in cause and effect. If any one scene were deleted, the story would fall flat. If any one scene were to be added, things would jam up. It moves like a predator. It’s heavy doom. This hardcore domino effect of an impulsive low-rent bank robber’s constant mistakes is how cinema is intended to function. Benny and Josh Safdie strike that perfect balance of storytelling and camera. Even that title has balls. Good Time.” (Joel Potrykus)
Image by Danny Madden 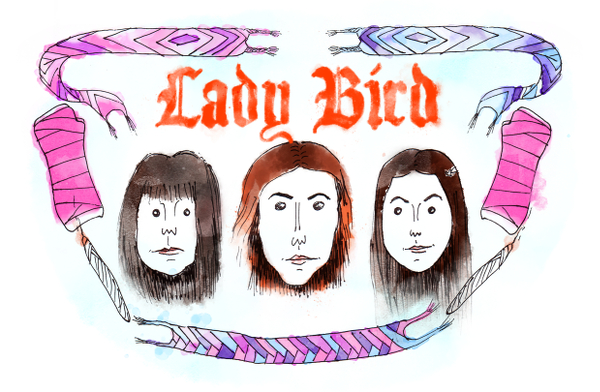 6. Lady Bird 126 points
“American indie teen comedies with a female hero are so few and far between, I can count the classics on one hand: Juno, Ghost World, Welcome to the Dollhouse … and now Lady Bird. From the opening frame, it’s impossible not to be hypnotized by Greta Gerwig’s wistful-slash-hilarious tone. Gerwig cocktails her own autobiography with a few shots of Joan Didion and the result is a beautiful, confident screenplay and a love letter to California’s oft-overlooked state wallflower, Sacramento. There’s so much tenderness for each of the characters in Lady Bird that the movie bleeds femininity in a way that great movies about young women directed by men (see above) simply cannot. Gerwig’s style is clear and vivacious but also soothing, and she captures a nuanced mother-daughter dynamic that’s rarely represented. How could Lady Bird have taken so long to arrive? I have a hopeful feeling its flight to greatness will usher in a bevy of new movies about funny, flawed teenage girls. I’m inspired and ready to go. Thank you, Greta.” (Kirsten “Kiwi” Smith)
Image by Leah Shore 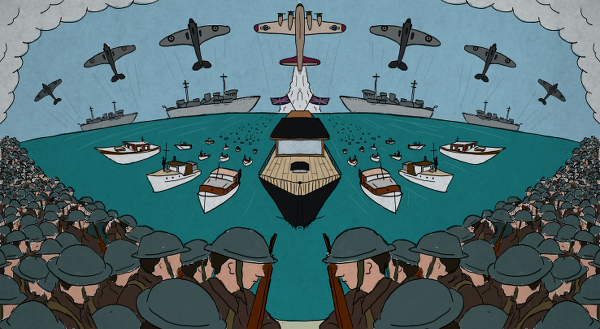 7. Dunkirk 122.5 points
“What does it mean to be a filmmaker and love Christopher Nolan? Is it ridiculous, too easy or too Hollywood to claim him as one of the most thrillingly ambitious modern filmmakers? I don’t think so. To me, he is not some dull and obvious representation of what things look like for the most financially and creatively privileged. He’s Michael Jordan. He’s Bruce Springsteen. He’s at the top because (almost) everybody can agree he’s the best. To argue against him for reasons other than distinct personal preference is pure contrarianism. The man is working with higher budgets than just about anybody else and to view the spectacle of Dunkirk is to witness artistic freedom and ambition exemplified. The near-magical tightness of the film’s compact run time was thrilling to me before I even saw it. To sit in a 70mm IMAX screening and watch what essentially amounts to the middle part, the best part, of a three-hour war epic in which most characters are not given a name and hardly any are given a backstory is to watch a filmmaker defy the conventions he has mastered in his other films for the sake of his own freedom and purity. Watching Dunkirk is watching Nolan unshackle himself from every rule of writing and write new ones for directing action and tension. That he can be doing so with hundreds of millions of dollars and the complete trust of major studios is to be celebrated. I consider myself lucky to so admire his films at a time where I can see them in initial release, in the director’s approved format, as large and loud as possible.” (Alex Ross Perry)
Image by Bernardo Britto 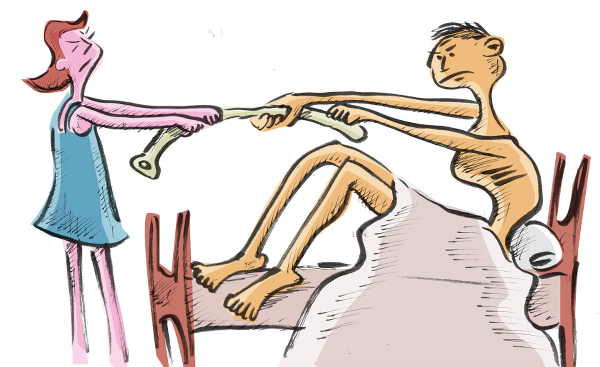 8. The Square 99 points
“Ruben Östlund’s latest is the most visceral, thought-provoking, and hilarious film this year. Like his previous film, Force Majeure, the story is about an aftermath: in this case, a bizarre moment where a modern art curator discovers he’s been pickpocketed in the town square. The domino effect that follows is unexpectedly riveting and self-reflexive; a narrative Möbius strip that touches upon the relevancy of artists and audiences, and the motivations behind the people who support them both. All of which culminates in a breathtaking set piece where an unhinged performance artist goes off the rails at an important fundraising gala; a moment of pure cinema that goes from positively hilarious to absolutely terrifying in seconds. Östlund is masterful in tracking what the audience is thinking, and elegantly subverting our expectations, and with The Square he continues to find that elusive balance of looseness and precision that so many of us aspire to.” (Michael Mohan)
Image by Onur Tukel (“The “post-coital tug-of-war-over-a-loaded-condom” scene in The Square is comedy (and cinema) at its finest.”) 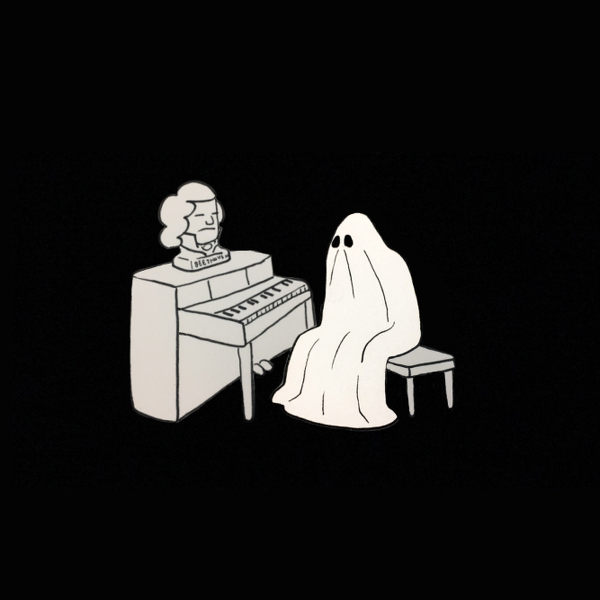 9. A Ghost Story 91 points
“How’s this for a premise? Drape a well-known actor in a corny Halloween costume and watch him mooch around a rigorously confined environment without agency or purpose for 90 minutes. From these potentially banal ingredients, A Ghost Story became the most original, profound and moving experience to be had at the movies in 2017. And like most great movies, A Ghost Story is a film better to experience than to analyze. It is a film to inhabit in the moment, a film that obliges you to be conscious of time as it unfolds, both in the rigorous organization of time in its narrative, and the immutability of time that it knowingly evokes. Time doth waste us all, we are nothing, irrelevant – and yet what we feel and how we live with and love other people is singular, unique and sacred, precisely because of our utter insignificance in the grand cosmic, indifferent scheme of time. These ideas sound a bit pretentious when transcribed but they are conveyed in the film through simple, achingly beautiful images, in long takes which elongate time and sublime edits that telescope it. It is a film that made me both swoon and think deeply, and one that I will revisit frequently in the time I have left.” (James Marsh)
Image by Kent Osborne 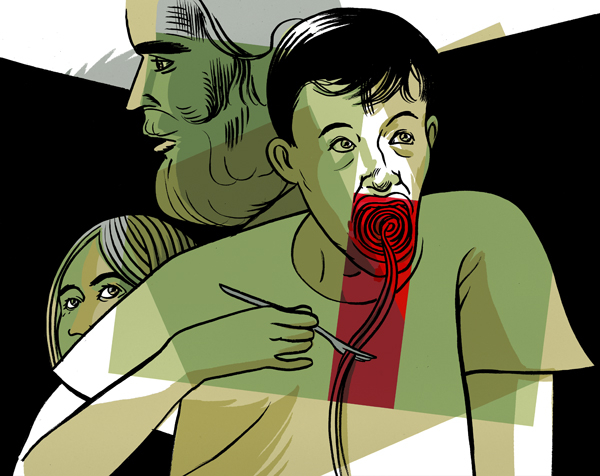 10. The Killing of a Sacred Deer 85 points
“In a year where so much of what’s been celebrated feels like it was already made 10 times, I’m thrilled to write a small note about a film all its own. The Killing of a Sacred Deer … sympathy for the Devil … libretto for divine retribution. This is theater of the absurd. This is theater of cruelty. This piece is music. Its sweet sound has pierced a hole in my throat. If there is God, God is cruel. Yorgos Lanthimos has created a universe that operates in its own language, rhythm and palette. I’ve heard his work described as cold or heartless, for me it is just the opposite: warm, human and so full of life. Blood courses through its veins at high speed. His work makes me feel less alone and oddly more hopeful. Not hopeful for the characters or the planet that they inhabit. Hopeful that someone out there on this shit-ship is making work without compromise.” (Janicza Bravo)
Image by Dash Shaw 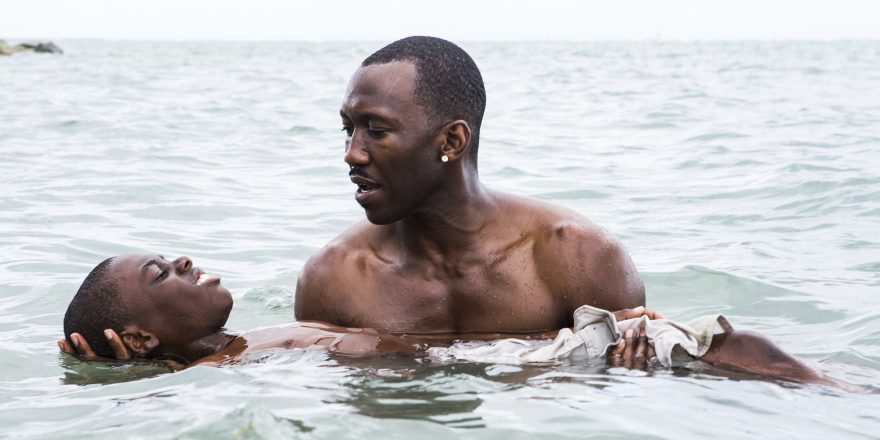 The 2016 Talkies: Talkhouse Film Contributors’ Top Films of the Year 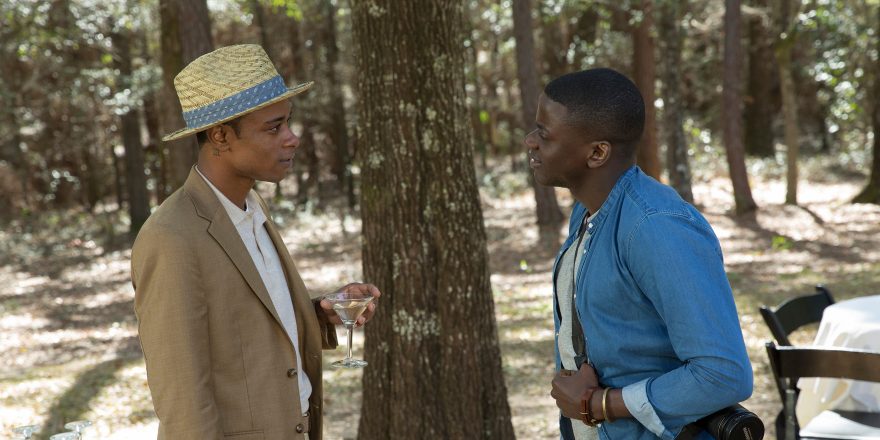