This was supposed to be a nice piece about the new Marissa Nadler record, Strangers, published the week it came out. I got a copy. I was excited to write about it! I had notes about each song and all my adjectives lined up like fantastical, sun-dappled ducks in a row. But every time I got close to collecting all of the disparate ideas I had, I’d find myself watching the news. And then I found it easier to creep onto the soapbox and shake my tiny fist at the world.

I didn’t feel comfortable hijacking a piece about someone’s record to talk about my own fears for the country, the world — and I realized that trying to shoehorn the larger conversation would strip it of its gravity, because nuance is verbiage and there’s only so much room on the Internet. But I realize now that I must, at least, attempt to credit seriously both my terror and Marissa Nadler’s art.

Marissa Nadler is someone I hadn’t given a thoughtful listen to until last year. If I’m being honest, I haphazardly discarded her work, tossed into the pile of unchallenging prettyish music being sold as “dark” and kinda sorta metal. But, just like all jerks who make easy and early assumptions based on subconscious triggers, I found out that I was very wrong. Nadler’s new LP (and, revisited with more attentive ears, her entire catalog) is much more than I had given it credit for.

It sounds like immediate human sadness. I’ve been feeling a lot of that lately.

When I first put on Strangers, I was struck by how decidedly unprecious it was. I was also grateful to hear a songwriter who wasn’t swimming in pastiche. Sometimes you love something for what it isn’t as much as for what it is. Her voice is unique but not heavily stylized; it feels remarkably un-put-on. She reminds me of Leonard Cohen. The songs project a darkness that’s subtle, one that addresses real things and is in touch with real emotions. It’s not just a vacant surface-lovely awash in shadows. It sounds like immediate human sadness. I’ve been feeling a lot of that lately.

The country that I love, one that I can’t help but see through the lens of the experience of my parents — who took refuge here as their homeland was ravaged by war — has been flirting with something resembling dictatorship. False prophets and demagogues prey on fear. For most, that entails stoking fear of “the Other.” Nothing does quite as good a job of eliminating the need for thoughtful analysis. Thinking deeply is tough, and gives no immediate answers or gratification. Fear, however, gestates into hatred, which galvanizes like no other feeling known to humankind. I hear presidential hopeful Donald Trump speak on TV and my mind wanders, almost automatically translating the sound of his awful voice into black-and-white imagery of nuclear plumes and skulls in fields. Watching this pulsating orange man-child get lionized, even by a minority of my countrymen and women, is difficult to stomach. In the wake of this gigantic awfulness, I have found refuge in music and art and film and poetry, because it fills me with hope.

I instantly found some solace in the opening track on Strangers, “Divers of the Dust,” which opens like a lullaby — albeit a dark, surrealist, post-apocalyptic one. Dark in the way I like my darkness, not trying too hard and juxtaposed with just enough beauty, which paradoxically makes darkness darker — in that way that Alfred Hitchcock would open a film with sunshiney good vibes just before things take a turn for some sort of mayhem. “Divers” is all of the hideous imagery I’ve been almost crippled by recently somehow made beautiful. I love tension through ambiguity. It’s unclear what’s happening, and I love it because it reflects my own nightmares, the ones I haven’t yet put into words or lyrics.

Strangers reminds me very much of Joni Mitchell’s The Hissing of Summer Lawns (1975) in its painterly vignettes of a kaleidoscopic set of women in the throes of something heavy. I love heavy. Oblique as the lyrics may be, I’ve taken to diagnosing some of the various “strangers” and their probable disorders, sadnesses, madnesses — whether it’s the desperation-fueled voyeurism of the voice in “Shadow Show Diane” or the disoriented memory-sickness on display in “Nothing Feels the Same,” because these are the kinds of webs I spin when I interact with work that resonates with me. It’s less time-consuming than cartography of possible layouts of Game of Thrones.

Although I’m suffering from a sort of imposed Mean World Syndrome-poisoning by forced over-exposure, as a poetic device, painting fever dream utopian landscapes as a metaphor for the deep terrain of the human psyche is still my wheelhouse. I’ve used this imagery in my own work to describe everything from primordial desires to pulling someone into the strange sensory relationship I have with my surroundings on day four on two hours of sleep. Traditional storytelling has never been all that exciting to me. As with Mitchell, the deeper I go into Nadler’s back catalog, the more story-oriented and love/heartbreak-ridden the material. I prefer the more Delia Derbyshire Dreams-like lyrics, which Strangers has a kinship with by diving into the depths of primordial fear we all so often share.

The layers of the album reveal themselves slowly; it’s exciting to traverse a work that feeds you in so many ways.

Listening to Trump is an exercise in hearing real darkness turned imaginary, its purpose inverted from “understand” to “fear.” The imagery of his disjointed utopian landscape is very much fantasy, both his imagined past America and the horrific future he’d have us live in — although his is not a journey into the human heart to better understand anxiety. It’s more like another pulsating orange red lunatic, razor-gloved and lulling you into the nightmare — because when you fall into it and surrender to the imposed narrative, the nightmare becomes the reality. I prefer Nadler and Derbyshire’s approach, where you realize “greatness” is a quiet strength within you, and that “home” is a place where all are welcome.

Strangers presents the listener with gorgeous vignettes of different characters; characters in a heightened state of anxiety, at the apex of their own personal destruction or sadness. This creates a world within a world. The layers of the album reveal themselves slowly; it’s exciting to traverse a work that feeds you in so many ways. As I listened through her back catalog, I realized that Nadler has been doing this for many years. From “Your Heart is a Twisted Vine” on 2012’s The Sister to “Dead City Emily” from Nadler’s previous album, July, there’s been a steady carving out of her own space. It’s nice to see artists thrive outside a cult of personality, clearly striving for genuine artistic triumphs rather than showy, but essentially shallow, seismic flashes of media hype. I’ve had my fill of noisy blowhards, whether musicians or politicians. Humanness goes a long way.

I’m not forgetting the horror show of the world; not even for a second do I have that luxury.

I had the chance to see Marissa live in New York City. Her voice was as beautiful as it is recorded. That voice was layered against heart-wrenching harmonies provided by a group of human beings playing music that they clearly love. I especially recall the lovely and solemn silence in the room as she tuned her guitars. There was a vulnerability that came across in the choice not to banter or make jokes. It was elegant, a woman who was already being open with her various anxieties and hardships in her music, choosing to let a few moments of silence go by without having to fill them.

I’m not forgetting the horror show of the world; not even for a second do I have that luxury. But there are kinds of darkness that accentuate the light. Nadler might be categorized as dark music by some, Goth-adjacent if not Goth itself, and that’s not necessarily untrue. But there can be truth and beauty to the darkness. Art lets us face it in ways that help us get through the larger, more insidious darkness that threatens to put us all down. 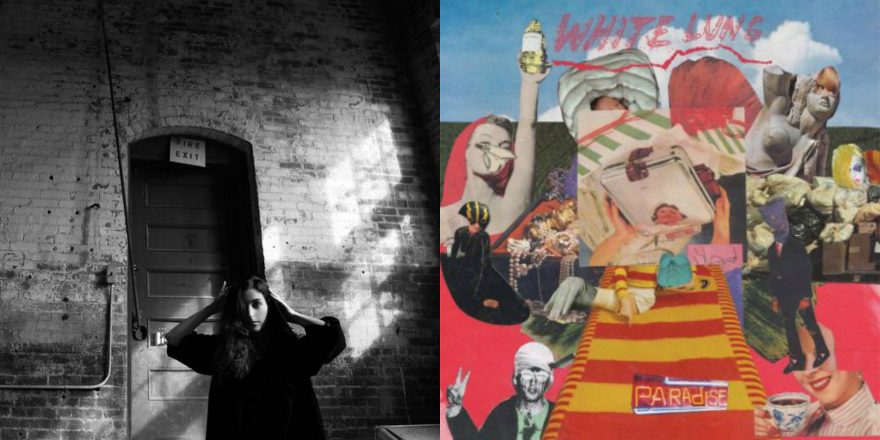