I was transcribing an interview with Swans’ leader Michael Gira a few months back, enjoying myself immensely (the listening, not the transcribing) when he made me so frustrated I almost screamed. He talked about sampling rhythm as “false” and “stiff” and yawn. Dave Grohl does this sort of “real music” thing too. So do a number of (and I hate to take it there, if you’ve heard any ladies say this, lemme know) dudes. Even this Alternative Press article that, perhaps knowing how absurd they all were being, could cite no sources willing to be named, piles on. I’m well tired of it. I eventually stopped screaming. But I want to talk about it.

There was a time, and it was longer ago than I care to admit, when I was oblivious to “studio magic” and thought all the singing, save for echo, was done live and just as I heard it on the records I listened to. This might have been true of say, Oum Kalthoum, but Yazoo’s “In My Room”? Probably not. I learned to sing, for as long as I can remember, trying to emulate things as I heard them, thinking effects were made via the use of a gizmo I had seen before, like a walkie-talkie or megaphone, or even just a specific physical space. I didn’t know that there were processors designed especially for souping up the drama.

My father was a musician, and for the most part he sang with the gusto of a lion alongside his harmonium. Everything was pretty organic, except we had some microphones, which I plugged into the stereo system, and I’d record myself singing along to the radio or the music on another tape or record. I had stacks of these recorded tapes.

(A Brief Digression About My Dad: My first actual practice with my friend in the basement of my house. As we emerge from a couple of hours of cacophonous sound-making, my father says to us with his adorable accent:

“You should call yourself the Blackmailers,” he said with a snort.

“Because you can go anywhere and say, ‘We’re the Blackmailers, you pay or we play.’”

Our record collection was varied music from all over the world; some disco, lots of ’60s stuff. My sister Alina’s contribution was synth pop and new wave. Stuff from England which, as a refugee kid, I knew wasn’t American but which didn’t feel any more foreign to me than the blues. I even taped myself playing recorder along to Happy Mondays’ “Bob’s Yer Uncle.” I had no concept of sex, but that song made me feel like listening to it as much as I did must have been sinful, like my mom would say, “Bad girl!” if she caught me.

By the time I hit 13, most of my sisters were out of the house and doing their own thing, so I had to figure out this music stuff on my own. Enter Nirvana (duh). By wearing that band shirt, I was granted license to hang with any other kids with a band shirt. And because of the way teenagers in band shirts evangelize the music they love, the result was a strange mosaic of dudes with long hair and women who made fun of Madonna (not me, though — I always loved and still love her). So there was Slayer, Bikini Kill, Nina Hagen, Lush, Tool, Babes in Toyland, etc.

I remember hanging out with this older dude who was illegally piercing my underage friend based on his adoration of her homemade Type O Negative tattoo. He had plugs the size of nickels in his ears and was clad in Doc Martens and a Deftones t-shirt. He said to us, “You know, fuck Depeche Mode. I used to be into that shit, but I saw them live and fuuccck all they did was press play.”

Kids today could have Google fact-checked that guy in an instant, but these were the days of dial-up and Angelfire fan sites, so with great shame I just said nothing. I, too, had seen them live the year before, and Violator (1990) was one of my sister Alina’s favorite records. I’d grown up on that music before getting into punk rock and grunge, but I just let him shit on them based on his erroneous and smug speculations about how their live show was done.

(Having later watched the Depeche Mode 101 documentary, and seen how many of the sounds and samples were loaded into different segments of the keyboard, and how many the band really played live in each song, the “just pressing play” accusation turned out to be completely false.)

I have never seen electronic music as any less soulful than rock. I didn’t see any difference between Einstürzende Neubauten taking steel pipes and sheets of metal from the scrap yard and evoking the feeling of an industrial park and Kate Bush using a Fairlight sampler to recreate the sounds of cellos and violins in “Under Ice.”

You see, “studio magic” isn’t just the machine from Josie and the Pussycats that makes the songs “sound better.” Learning production techniques and learning how to use these machines takes a certain kind of dedication and a certain kind of brain. Sequencing might be a breeze during that split second when the computer snaps every note to the grid, but knowing what to sequence is everything. These things are hard to quantify, but people who think sequenced music is “easy” to make are like folks who think they could paint abstract like Gerhard Richter: my answer to them is, “Please do, I’m sure it’ll look great in the Musée du Junkyard.”

So moving ahead, in 2009 I had a band called Religious to Damn that felt impossible to keep afloat. In the live setting, I was singing, playing various kinds of percussion, guitar, harmonium and Rhodes organ. We had a cello/viola player, a Mick Karn-inspired bass guitar, live orff and drums, and another guitar. I start seeing and reading about these electronic bands that are getting all kinds of label backing and press, and some of them are singing with their iPod live, and plenty of them were definitely just pressing play. The difference was that nobody seemed to mind. This was odd to me at first because, even in the synth world I’d grown accustomed to, folks like Martial Canterel and Drew McDowall still played all the shit live. Even the drum sequences were sometimes initiated on-stage, in the moment. So I was in a quandary. I wanted to make the music I wanted to make, I thought things should be played live, I couldn’t afford to have live musicians recreate every sound I wanted… so what was my problem with backing tracks?

The answer was that, unless I wanted to be the Deftones tattoo guy and have arbitrary rules about what was “real” music, I had to let that shit go. So let that shit go I did. Logistically, artistically and economically, there was no other choice. My bandmate Josh Strawn from Religious to Damn, who is now the other half of Azar Swan, showed me how to program synths and drum beats, and it was a revelation. Not only was it refreshingly easy after the headaches of chasing down hired-gun jazz bassists to play Religious to Damn shows, it threw me back into this synth music I had grown up with and loved in some of my most formative years of discovering what music even was.

I worked on what became Azar Swan tirelessly and I love it, but I composed and Josh helped me produce without thinking about live shows. I don’t write for live, nor do I jam songs out. The idea of thinking about it in a live context is a “puzzle for later” and once it came time to solve that puzzle, the only thing that made sense was to put certain elements of the songs on backing tracks. Rather than focusing on executing the electronics live, we generally use bass guitar and live drums to thicken and emphasize the rhythmic and physical aspects of the music.

Using backing tracks has an additional perk. Remember that dust-up recently when McDonald’s tried to book talent for SXSW but initially told the bands they didn’t have the budget to pay them? (McDonald’s later reversed this policy after facing serious backlash.) This is just an especially egregious example of how a lot of the music business works right now. Even many of the biggest festivals and the biggest promoters are trying to short-change reasonably successful and established artists by paying them in “opportunity” and “exposure.” This means that when you have fewer musicians who have to get hotels and flights paid for, a band has an easier time getting out there and playing shows.

What’s the saying, necessity is the mother of invention? It’s also the mother of a lot of bands out there using pre-recorded and sequenced backing tracks in their live shows. Josh is in another band called Vaura, which boasts some of the most insanely talented musicians that New York City and, really, the world, has to offer. We could put together the most insane live show tomorrow: six or seven of the most mind-blowing instrumentalists in the New York avant-garde. But nobody would fucking pay them to go on the road. (I take that back, they’d offer to cover two bandmates’ flights and hotels… maybe three.)

While economics and logistics are definitely factors, so many of my favorite artists used samples and backing tracks along with organic instrumentation: Sleigh Bells, Björk and even Peter Gabriel. (Check out this clip from a 1987 performance. You can also see somebody playing an old Fairlight, which triggers sounds. It is the most outdated-looking thing ever, but it sounds amazing.) It’s as much of an aesthetic decision as anything: the marriage of the machine and the human which defines our everyday existence. These qualities, combined and executed well, can be completely otherworldly. I contend that Tangerine Dream’s Cyclone (1978) is just as powerful in this regard as György Ligeti’s “Requiem.”

I was always taught to respect my elders, and of course I still love Michael Gira, but I can’t help but sometimes feel, maybe ungenerously, like he and his ilk are dinosaurs, at least on the subject of backing tracks. Anyone of our time understands that making music today rarely comes with all the glory and heroin you can eat. It’s work and it’s pain. But it’s also the love of our lives. I wish folks still bought records and merch by the cokeload, but they don’t. (You guys heard about the internet, right? Just checking.) I’m genuinely psyched for anyone who can still tour at the age of 210, full orchestra in tow, but for those of us who have limited means with which to achieve our dreams, especially if those dreams are big and have a lot of sounds, please have some compassion. We are doing the best with the hand we’ve been dealt. 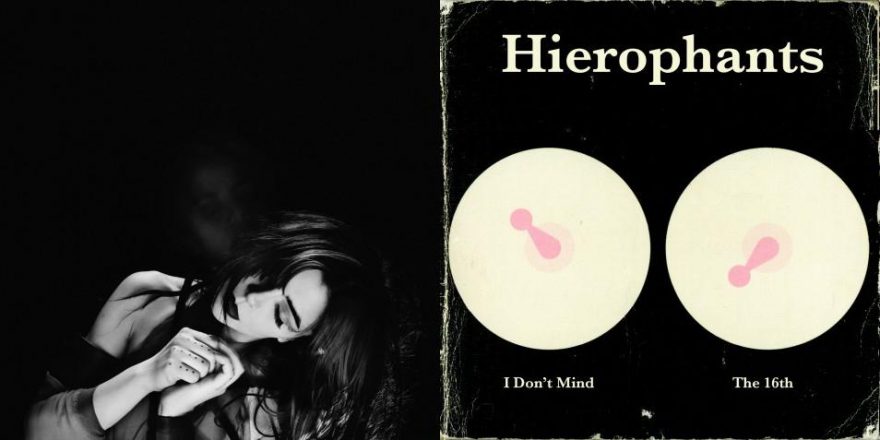