This week’s playlist comes courtesy of Michelle Blades. Born in Panama, Blades has also lived in Miami, Phoenix, AZ, and Paris, and has toured the world with her signature psychedelic “pop picante.” To celebrate her new album Visitor, she gave us a list of some of her favorite international hits. Add a lil’ culture to your day and check it out!
—Annie Fell, Associate Editor, Talkhouse Music

Abelardo Carbonó – “Muévela”
I used to work at a Mexican coffee shop in Paris and we could choose what we wanted to listen to, which was awesome because everyone brought something to the table playlist-wise.

Everyone was Latino and nostalgic, so we mainly listened to things from our beloved continent, jaja. One of my friends who worked there, Julio, put this song on, and I remember I couldn’t concentrate that whole day — I was so blown away by what you could do with champeta music and how weird and experimental Abelardo made it sound. It was humorous and intense at the same time, a cocktail I love in music. And that deconstructed guitar solo! What can I say? It’s genius.

Stephen Steinbrink — “Zappa Dream”
When I moved to Phoenix, I was 18 and had no clue what a real local music scene was like. I went to this venue  called Trunk Space (which would forever change my life in the coolest way possible) and saw Stephen Steinbrink play. He was just amazing. That was my first real introduction to DIY — to not waiting on anyone and going for it. He is still a huge influence on me. Stephen has been playing this song for a long time. I remember friends were fans and fans were friends, and when he’d play we’d all sit on the floor and listen to his songs while mouthing the lyrics together. He finally released it recently and I couldn’t be happier.

Little Jesus — “Norte”
I met the dudes in Little Jesus during one of my séjours in Mexico City. They’re a group of close friends making music together, and making it. It’s really nice to see. Latin America always needs more people making music and sounding like themselves — singing in Spanish and giving the scene some pop that can accompany our everyday lives through traffic, heartbreak, parties, and downtime; a pop of our own. They’re putting out a record soon (which is really good), but I’ve always loved this song in particular. Something about it so sad and pretty. They also direct their own videos, and I’m such a huge fan of what they do. Gil Hernandez plays in the band and I asked him to direct my video for “Kiss Me On The Mouth,” because I really wanted their take on my sound — their visual world is really identifiable and fun, just like their music.

Le Chemin De La Honte — “Les Joies du Métie”
I was on tour with Laure Briard and I remember we had driven, like, eight or nine hours to play a festival in Toulouse. We were in this upstairs area of a squat reserved for bands; we could hear another band playing downstairs, and t sounded so awesome that we went to see what was up. Man, was something up. They blew our minds. There are two bassist in this band, and one of them just had two strings and a fuzz on her bass, just tearing my whole world apart. The music was so angry and tense and it just sucked me into their vibe. I mean, their name translates to Path of Shame…

We bought their record and listened to it during the whole tour. When they played in Paris, we all went and stood in the front and shouted all their songs. There’s not enough music like this in France, in my opinion. Things tend to sway on a large scale towards whatever sells or is in fashion — right now, it’s electro-pop which is great in its own right, but a little sonic diversity is cool. So, Chemin de la honte — merci d’éxister.

Grand Veymont — “Bois Barbu”
This is another band I came across on tour, this time while I was playing bass with Fishbach. They played in Lyon, opening the show. I heard their set start when I was backstage and I was like, Um, I need to see what they’re playing. Their setup just sounded amazing. My mind was blown. Just two members, both playing vintage organs and synths, but one with a drumset, too. They have a sunny, kraut sound, like if Disney made a movie with a kraut soundtrack and they let Tarantino direct it, and he was feeling good that day. The singer can switch from sounding human to sounding like a flute, and on stage they were set up real close, as if they were in a tiny room, and I was in that tiny room with them. I’m a huge fan.

Amnesty’s Free Your Mind
I was in Mexico when I first listened to Amnesty. Kanye had just dropped “Lift Yourself” and I was so into the sample he used, so I looked it up. Turns out, Kanye the secret crate-digger found a bygone band called Amnesty. I looked them up on YouTube, and their full album only had, like, 10K views. It’s one of the greatest things I have ever listened to. It’s like the band really wanted to offer something to the listener, to themselves, to music; it’s so creative, it’s so curious. It sounds like punk and soul and funk and prog and DIY. Even its shortcomings have a musical proposition to make, which to me is the greatest thing you can do in music: Propose something to the advancement of music, of sound.

Cate Le Bon — “He’s Leaving”
I love Cate Le Bon. I think she is a genius; she is free, truly free in her music-making. I can hear it, and I’m always looking for fellows in that sense — people who are there, not for show, but to play and create and get down to the nitty-gritty of creativity. We played together in Phoenix in 2013 or ‘14, back when Kevin Morby was in her band, and there was NO ONE at our show. The sound engineer, us, and two friends. It was funny. So, we just played for each other. I admire her guitar work, her lyric work, her collaborations, and her thirst for sound. I think she is someone I will appreciate and be inspired by for life. Thank you for creating and pushing music forward.

Meridian Brothers — “Como Estoy En Los Sesenta”
Where do I start with this band? If they started a cult, I’d join in a second. I think what they are doing for music in Latin America and future generations to come is primordial. They’re an example of musicians emancipating themselves from copying the North American anglophone sound that has dominated music on our continent for so long. They’re really digging into their own musical roots and putting it into a contemporary context. They clean the dust off salsa, cumbia, champeta, son — everything our parents listened to — and brought it anew. The lyrics are so engaging, so creative in the mastery of the Spanish language; the songs are fun, tragic, scary, funny, romantic, sarcastic. Every piece is so alive and so well thought out and so free. I had to rethink music and my identity in music after hearing them for the first time. Colombia has it going on, and I hope everyone takes notice.

Uncle Luke — “Scarred (Cap D Coming)”
Man, Uncle Luke was a big part of my life growing up. The whole Miami booty music scene: 95 South, Trick Daddy, DJ Lazz, and the amazing curation by Power96 in the late ‘90s/early ’00s. This is what we all danced to; this was what I used to obsess over growing up. I remember the production, the beats… Everything fascinated me, and I’d make playlists on cassette when Power96 would start mixing crazy sets after midnight. I think I have over 100 cassettes of this stuff. There’s this sense of urgency — and of physical challenge, because lemme tell you: Shaking your ass at that velocity was a workout. I remember one time, my legs gave out from exhaustion on the dance floor at a friend’s getty, and I just sat there on the floor like, “Keep going, everyone, I’m good.” And now, with the new generation making music, I can hear the references to the great classic that is Uncle Luke. It’s sick.

Artur Nunes — “Imperialismo”
I found Artur Nunes one sleepless night in Mexico while swimming through the black hole of music discovery that is YouTube. I was immediately taken in by the melancholic guitar. Turns out, Artur Nunes would be my only musical accompaniment for months after. I had never listened to Angolan sound before, and his songs often took in political post-colonial matters and their effect on his heart, his mind, his soul, and the world around him. To take such a huge and difficult subject and make it transcend to one’s daily life — mixing Portuguese and Angolan so elegantly (which interests my multi-lingual self in aspects of songwriting) — I really liked how his songs were also minimal, yet complex in their arrangement. This song is definitely my favorite of his.

Outkast’s The Love Below
I think I was 14 when this album came out. I remember laying on the floor on my back and staring up at the ceiling while the record played out; I knew I couldn’t go back after listening. My whole perspective on everything changed: What you can do in a single song — what you can do in a whole album, in the studio — the kind of stories you could tell with words, and the different story you could tell in the same song through the music. It started my pursuit to be inspired by people whose musical freedom you could hear and feel in the recording, people who didn’t give a damn what they sounded like as long as it got them closer to sounding like themselves. This is the record that led me to Funkadelic, Zappa, Duke Ellington, and everything in the playlist I’ve sent. This record helped me mature as a music listener and as a musician, and helped me take paths towards understanding sonic freedom better — the infinity of possibility in music-making, and how therapeutic and empowering that could be. 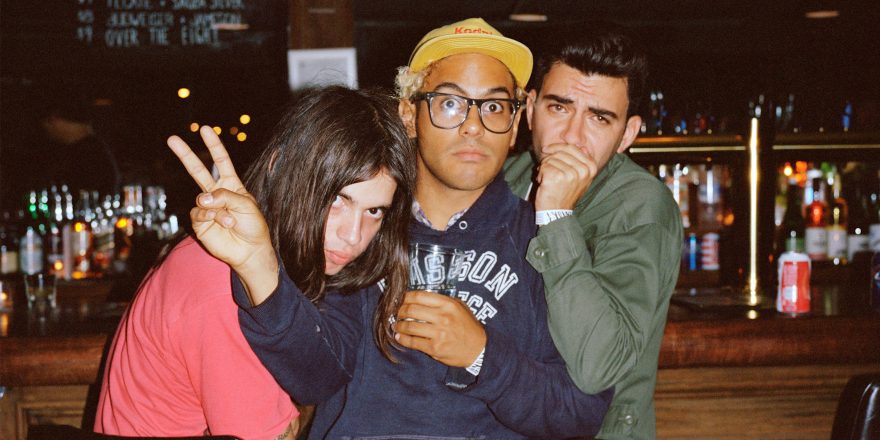 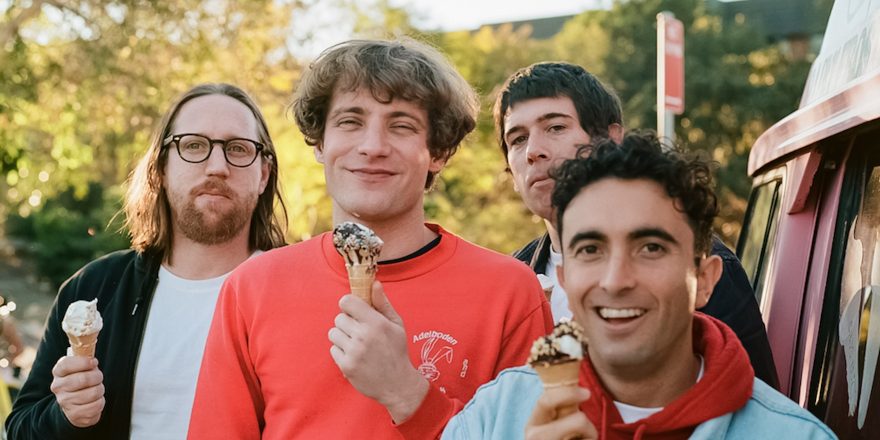 Talkhouse Weekend Playlist: Punk from Down Under