For Thanksgiving week, we’re republishing this 2015 piece by Stephen Cone about a movie that has great personal significance for him. I hope you all have a happy and peaceful holiday! — N.D.

I first saw Home for the Holidays at the Julia IV Cinemas in Florence, South Carolina, on what I’m guessing was either the first or second week of November, 1995. I was 15 years old. In my mind, my sister Christina is there, but she would’ve been 13 at the time and movies were Dad’s and my thing. I think she’s there in my mind because the film features an exquisitely drawn relationship between adult siblings, and it’s since become impossible for me to think about the film without thinking of her. In any case, it was probably just my father and me, and we would’ve sat on the right-hand side, five or six rows back, the two aisle seats, like always.

There’s another essay to be written about the time my dad, a Southern Baptist minister, took 13-year old me to see Jonathan Demme’s Philadelphia at the same South Carolina theatre, and the powerful personal impact that had on my life. But Jodie Foster’s extraordinary, eternally underappreciated Home for the Holidays is celebrating the 20th anniversary of its release, so that’s the one I’m focusing on here.

Home for the Holidays tells the story of recently fired art restorer and single mom Claudia Larson (Holly Hunter) and her trek home to visit her eccentric, slightly bonkers family over Thanksgiving. These days, I identify with Claudia more than any other character in the film (at 35, I’m a year younger than Hunter was when she shot the film), but at that point Robert Downey Jr.’s Tommy, Claudia’s brother, was my way in. As a South Carolina teenager slowly coming into his own queer identity, I had few options in terms of onscreen LGBT representation. The aforementioned Philadelphia? MTV’s The Real World? Was that it? Amidst the paucity of queer youth representation, the shock of encountering Downey Jr.’s gay Tommy in a deceptively light family dramedy that didn’t revolve around his existence was particularly revelatory. Philadelphia had been About Homosexuality, Home for the Holidays simply made room for it, providing a more directly relatable experience for someone just waking to sexual possibility. It’s interesting, too (and especially so for a ’90s teen), how playful and teasingly mysterious the film is in terms of sexual identity, leaving unanswered until the halfway mark the identity of Leo Fish (!), Tommy’s new friend played by Dylan McDermott, and later eavesdropping on the masculine phone interplay between Downey Jr. and his partner (“I miss you, man.”). And then there’s the surprising cross-generational make-out session in the opening scene between Claudia and her boss, played by Austin Pendleton. (Little did this 15-year-old know he’d direct Pendleton one day!) All stunningly eye-opening for a Southern teenage film buff looking to expand his horizons.

(This was likely around the same time I found out the son of one of my dad’s most trusted church elders was gay. He was an employee, at different times, of both the movie theater down the street from the Julia, the Capri III, and the local video store, Finklea’s. Unsurprisingly, the man didn’t come to church very often, so I would only see him at the movies. Sometime around 1992 or 1993, he gave me a Batman Returns poster, a poignant gift from one relative stranger to another.)

I’m not sure if at that point in my life – or, more specifically, my life of movie-watching beyond the ample characters found in animated films, musicals and syndicated television (Little House on the Prairie, The Waltons, Full House, etc.) – I had yet encountered an ensemble film made by and for adults, in which multiple points of view and life experiences shot across the screen rapid fire, and in which the narrative was driven by quotidian experience and the push and pull of familial relations. What a revelation to encounter the energy of an action movie inside a film about being a member of a family. Ten years before discovering Cassavetes, this was as close as I would have gotten to the fiercely cinematic potential of family dynamics. And what a wonder – and this is to the film’s tremendous credit – that this largely secular Maryland clan, which couldn’t be further from my own experience, felt entirely universal, even at that young age.

None of this is to mention the artistic triumph of Jodie Foster’s film. Foster is on the record as saying she was inspired by Cassavetes’ overlapping dialogue and emotions, and indeed what we find in this ostensibly crowd-pleasing mid-90s Hollywood dramedy is a hilarious, poignant and tumultuous combination of 1940s screwball comedy, 1970s character piece, 1980s slapstick and 1990s indie drama. Few American films, not to mention comedies, have felt as chaotic and alive as Foster’s film does, in no small part due to the clear and obvious affection Foster has for both the actors and the characters. Home for the Holidays is tightly scripted, but feels completely free, almost improvised. There is the shagginess of a Hal Ashby film, the bite of an Elaine May film, the wildness of Cassavetes, all packed inside the unfortunately now-clichéd brown-gray naturalistic sheen of The Indie Dramedy.

I can’t think of a more touching scene in American movies than the moment when Hunter and Downey Jr. spontaneously and simultaneously drop their dessert forks and embrace, a hug that contains their entire, inextricable lives, and which fuels them for both the minutes and the years ahead. And indeed, the movie revels in the unexpected, both large and small, and shares with filmmakers like Cassavetes, May, Ashby, even Maurice Pialat, a probing interest in what lies both before and beyond the traditional cutting point, in the space where secret lives reside, and with humanizing characters who, in lesser hands, would come off as caricatures. The lingering melancholy on Geraldine Chaplin’s face after her quietly operatic confession of love to Charles Durning; Cynthia Stevenson’s checking in with her dad about his pills before having a turkey thrown into her lap. Only Arnaud Desplechin’s A Christmas Tale has matched Home for the Holidays in terms of tonal dynamics, unpredictability, authenticity, life and humor in the family holiday film.

In the final moments of the film, the past and the present collapse into one, as Claudia heads home and her most recent trip home becomes its own flashback, another family memory. Such memories have not decreased in significance for me over the years. The happiest of my life are those made between early November and the end of December. As you read this, I’m now back home in Charleston, SC, having traveled there from Chicago to spend 10 days with my own parents, and my sister. While my own family isn’t as combative and talky as the Larson clan, there is an exhilaratingly bittersweet quality to all family life, moreso as the years go on; reality educates us and life leads us in different directions. It’s important that we keep telling stories about family, because yours is mine and mine is yours, happy and unhappy in their own way, all year round. As Claudia says to her mother, having snuck into the pantry to escape the dining room apocalypse, “Everybody’s growing up. We’re all growing up.” 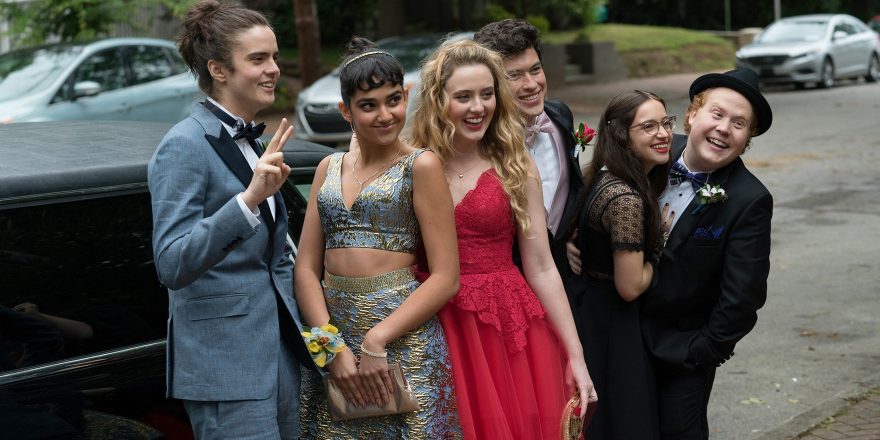