Ian Everett is a member of the band Solid Bronze. Their debut album The Fruit Basket was released September 13 via Schnitzel Records.

I’ve been playing music for the majority of my life, and as far as I’ve ever been concerned “music” and “job” have always meant separate things. Music came naturally as something I would obsess over, either playing or researching, and my job was just a way for me to be able to pay for anything dealing with that obsession. As a teenager I worked for a butcher in a farmer’s market in Trenton on the weekends. Meat was never a passion of mine by any means, but it afforded me the same bass guitar and amplifier that I use to this day. In college I studied painting at University of the Arts and they gave us some great advice about finding work after graduation. They said when you graduate, you’re going to have to find a “regular job” that will allow you to be able to make artwork, either by funding it, allowing you time or requiring a lack of daily mental distress. I started working at Trader Joe’s about a year and a half after graduating, and it didn’t take long before it became clear that it was a place that artists gravitated towards to the point that it’s a joke that “everyone that works at Trader Joe’s is a musician.” Not true in the slightest but chances are that if you have ever worked at a TJs or shop at one regularly, you’ve come across a working musician.

It’s now been nine years that I’ve spent with the company. I’ve done several side hustles and seen a lot of people come and go. My bandmate in Solid Bronze, George Miller, has worked there for a few years now as well. I met my fiance at the store, my brother works there and I’ve made some lifelong friends. One of those is Chris Harford, without whom the music of Solid Bronze would not exist.

I met Chris in 2013 when he started working at the store. I was in a band that he had heard about at the time though I had no idea of his musical significance when i first got to know him. That changed after I saw him play for the first time on Thanksgiving night at John & Peter’s with a star-studded lineup to a completely packed house. It was my first experience in realizing that even that guy who played his heart out for two hand a half hours and had everyone transfixed with his show still needed to work with me at Trader Joe’s. I learned from Chris about being a musician with a day job and how to balance your time. He’d be booking shows on his break or finalizing a band lineup on his phone amongst the stacks of wine in our back room. I was naive to a lot of this as my band was trying our best but really was just for fun, but I paid attention to how he operated. Chris eventually left the store to play and make paintings full time but our relationship lasted.

When the time came that George and I were preparing to make our own music together, I called in Chris as we had talked about working on a project at some point and I knew he was into the kind of music we were stirring up. We had a few demos and he liked them and passed them on to his friend Mickey, also known as Dean Ween, who also liked them enough to invite us to begin recording with him at his studio. This began the recording process that would lead us to a new band, a debut album, and the opportunity to work with musicians such as Mickey, Kidd Funkadelic, Dana Colley, and Lee “Scratch” Perry. Crazy to think it all stemmed from a meeting of two grocery store workers.

What Trader Joe’s provided during this process was the flexibility to take days off to record, the option to work a midnight shift that would allow me time before clocking in to work on the songs and also just having co-workers who are interested and supportive of such a venture.

In addition to Chris Harford, you can hear another TJs musician on our album, Chris Lewis aka CLEW. He spent a couple years in New Jersey before moving back home to Atlanta and our paths also crossed at the store. We collaborated mildly before he moved but when the Solid Bronze songs were coming together he was on my collaboration list and ended up an integral part. He still works for the company and is busy building his career as a hip-hop artist down south.

There are a few struggles with being a creative person in this type of job. It’s a busy store and very physical, a lot of walking around and even more lifting and moving of heavy stuff. It’s enough that when you get home and finally take a seat, you could be down for the night. With all the movement there can be a long-term physical toll. I’ve encountered plenty of minor injuries but have also had to deal with back pain and knee problems that have come about over the course of time. It can be mentally exhausting, too. There are far worse jobs when it comes to dealing with people, but in retail you’re dealing with the public in its purest form. Everyday people, a lot of whom force you to check your ego at the door. It doesn’t matter how good you think your artistic output is because when you’re at the register you’re a cashier, not an artist. Being able to let go of ego is probably not the worst thing for an artist, though after a few years it’s easy to get a little jaded by this.

All of that said, I owe a lot to the time I’ve spent at Trader Joe’s and as music has become more prevalent in my life, I’ve realized why it is I’m still there, that freedom and flexibility that I learned about in school. The company has a culture that separates it from other jobs of its ilk, which helps the banality of the work and surely brings in some interesting employees. If you’re an artist looking for a way to afford your obsession and need a regular job to clock in to, it may be hard to find somewhere more fitting than Trader Joe’s.

Ian Everett is a member of the band Solid Bronze. Their debut album The Fruit Basket was released September 13 via Schnitzel Records. 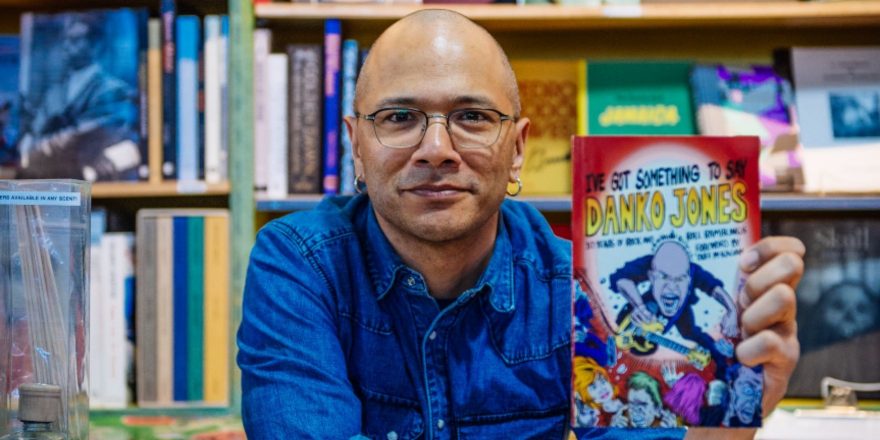