Braden King’s most recent feature film, The Evening Hour, premiered in competition at the 2020 Sundance and Rotterdam Film Festivals. Previous work includes the feature film Here, the documentary Dutch Harbor: Where the Sea Breaks Its Back, the shorts National Disintegrations and Home Movie, and videos for Glen Hansard, Sonic Youth, Bonnie “Prince” Billy, and Laurie Anderson, among others. His films and installations have shown at venues worldwide, including the International Film Festival Rotterdam, the Berlin International Film Festival, The Museum of Modern Art, and MASS MoCA.

‘Wэndy’ is streaming. We made a movie about the making of it. Legally we cant release it because the studio rejected it. They grew concerned when they discovered it wouldnt feature interviews. If you see ‘Wэndy’ and are interested DM is open and we’ll send the link pic.twitter.com/CBv1E1CIlg

The Ross Brothers’ fifth category-obliterating feature, Bloody Nose, Empty Pockets, a beautifully tipsy, seemingly vérité chronicle of the closing night of a Bukowski-worthy dive bar on the outskirts of Las Vegas, premiered at the 2020 Sundance Film Festival to well-deserved acclaim and much discussion about the line between fiction and non-fiction. The film’s distributor, Utopia, is set to host one-day virtual screenings for National Dive Bar Day on July 8 before a wider release on July 10. One thing you can always be sure of with the Ross Brothers, though, is that there is always more to the story.

It turns out that Bloody Nose might not exist at all without another film Bill and Turner Ross released much more quietly via the tweet above during the early days of the COVID-19 quarantine: an astonishingly poetic 60-minute chronicle of the making of Benh Zeitlin’s Wendy, called Second Star to the Right and Straight on ‘Til Morning. It’s the best thing I’ve seen since coronavirus kicked in (and, you know, we’ve all been watching a lot of movies). So, I got on a call with Bill and Turner Ross to talk about the film.

“Benh is a good friend of ours and we always work on each other’s projects with whatever’s needed,” explained Bill when I asked how Second Star came about. “We had the Wendy shoot on our calendar for quite a while and then all of a sudden they pushed their schedule by three months, leaving us with a clean slate. We had the idea for Bloody Nose in our back pocket quite a while, so we just said, ‘fuck it,’ and tried to pull it all together with the new time we had. Somehow, it worked. Then, right after we wrapped Bloody Nose, we flew to the Caribbean with [actor] Lowell Landes, who’s in Bloody Nose and Wendy. And then we stayed in Montserrat for the entire production.”

Zeitlin’s Wendy is an epic reimagining of the Peter Pan story, exploring the fight to save the free spirit of youth from the deadening perils of growing up. “The hardest thing to do when you get older is to continue to believe that you can do things that are impossible. That’s what we lose,” we see Zeitlin tell the crew about 10 minutes into Second Star, as part of what appears to be a Day 1 inspirational speech. “I wanted to make this movie at a moment where I knew I was going to be getting older. I wanted to push to do something impossible. … What we have in front of us most certainly is impossible. We’re going have to make a movie that is impossible, about an impossible child who does impossible things. [But she] knows how to take that kernel and then grow up with it …”

As Zeitlin’s voice fades into unintelligibility under the encroaching sounds of walkie talkies and the noise of production logistics, the Brothers cut to his film’s star, Devin France, puking. It’s a hilarious tongue-in-cheek tease on Zeitlin’s earnest attempt at inspiration, but also a foreshadowing of what, by all accounts, did turn out to be a nearly impossible shoot.

“We had the best job,” said Bill. “Everybody knew it. We knew it, too. The crew would be so tired, and they’d look over at us and just shake their heads, like, ‘Man, you guys got it made.’” The brothers laughed. Turner continued, “We definitely did. But we tried to make it count.”

Well, they absolutely made it count.

Imagine Day for Night directed by Zabriskie Point or The Passenger-era Michelangelo Antonioni and you might start to scratch the surface of how Second Star to the Right and Straight on ’Til Morning feels and plays. It’s one of the most experientially accurate portraits I’ve ever seen of the fever dream that feature film production can be – especially in a distant, difficult location like Montserrat. The film flows like memory. That memory becomes yours. You think back on it and have to remind yourself that you weren’t there, too.

One of the film’s most incredible feats is the way in which it inhabits the experience of Wendy’s child leads and, by extension, renders the crew’s intense efforts as a kind of parallel, child-like play. (This reminded me of Artavazd Pelechian’s moving and criminally unknown 1983 film, Our Century, which expressively uses found footage of the U.S. and Soviet space programs to make man’s early reaches toward the stars feel like a child’s game.) “We wanted to show the adventure these kids were on,” Bill told me. “None of them were actors. They were just plucked out of little kid life and thrown into this completely surreal circumstance. He continued, “We just thought that documenting the adults, like a traditional behind-the-scenes film would be pretty boring, head-up-your-ass kind of stuff, unless the volcano erupted. So, we latched on to the idea of seeing it from the kids’ perspective.”

Turner chimed in, “I don’t think either of us read the script going into it. We didn’t really want to know what was going on so that we could just be present. If we wanted to pop into the set and see what was happening, that was great, but if we wanted to go off and hunt goats with somebody in the mountains, that was great, too. We don’t want to see what’s expected to be seen. We don’t want to see the known thing. We’re always asking, ‘What can we discover? What can we play with here?’ And then hopefully we can extrapolate that experience so that people get the sense of being there. In all our films, we’re saying, ‘Here’s a place and time that we were in and here’s what it felt like and here’s what it sounded like and here’s what we found interesting to look at.’” Bill finished the thought, “We always try to shoot the adjectives and not the noun. A lot of times, we’re shooting things that people are very familiar with. We always try to look away from what you might think you should be looking at. We’ve never been good at being interested in what we’re supposed to be interested in. If something’s more interesting over here, we look at it. And that’s what we shoot.”

The images this methodology led the Brothers to capture for Second Star are sublime, even in the film’s bootlegged, un-color-corrected, un-mixed state. Clouds between cliffs. Half-sunken boats under rainbows. A tarantula crawling on a ledge. The kids and crew fighting their shadows. Turtles and frogs and faces full of wonder. On set and off, experience replaces logic and presence takes the place of information. The end result is a remarkably poignant testament to what Zeitlin and his cast and crew accomplished and the spirit of play, wonder and “challenging the impossible” that informed their herculean effort. At the same time, though, Second Star to the Right and Straight on ’Til Morning stands as a profound piece of experiential cinema in its own right. It’s astounding that the studio wasn’t interested in it.

Having made films in the Aleutian Islands, Armenia and very remote parts of the United States, I’ve observed the ways in which the expedition of production can be deeply meaningful for all involved, including the community in which a film is shot, and I’ve become obsessed with the question of how you let the audience in on that experience. Is a film actually a latent, very distant record of what the cast, crew and community experienced as they made it? More and more, I’m finding myself wanting to figure out new ways to merge those two things – to make the experience of shooting a film and the end result as unified and interwoven as possible, in an effort to bring the audience along on the expedition. Second Star to the Right and Straight on ’Til Morning is a map to that destination. While we were talking, Bill reminded me that Second Star’s title refers to Peter Pan’s original directions to Neverland. And if Neverland ain’t the movies, what is?

Braden King’s most recent feature film, The Evening Hour, premiered in competition at the 2020 Sundance and Rotterdam Film Festivals. Previous work includes the feature film Here, the documentary Dutch Harbor: Where the Sea Breaks Its Back, the shorts National Disintegrations and Home Movie, and videos for Glen Hansard, Sonic Youth, Bonnie “Prince” Billy, and Laurie Anderson, among others. His films and installations have shown at venues worldwide, including the International Film Festival Rotterdam, the Berlin International Film Festival, The Museum of Modern Art, and MASS MoCA. 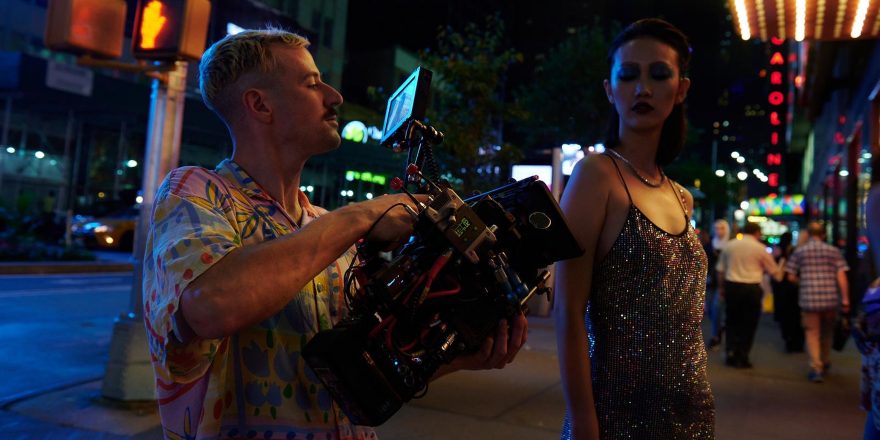 The Benefits of Being Hungover as a Documentary Filmmaker