Blood Relatives, which I wrote, directed, produced and act in, is everything but the kitchen sink: it’s a father-daughter vampire road trip film. A loner vampire wandering America’s backroads finds himself confronted by a teenage kid, who has the fangs to prove she’s his. It’s no coincidence that my first feature as writer-director is a road movie, one of my favorite genres.

Paper Moon was a movie that played on television frequently and that even people who were not cinephiles recognized as an important movie. It’s a very easy movie to watch and be a fan of. It made a big impact on me and was a major inspiration for Blood Relatives. My film is very much Paper Moon meets Near Dark, by design.

I have clear, fond memories of watching Adventures in Babysitting. I grew up in an era of movies repeating on basic cable, often “family friendly” stuff. I was probably six or seven years old. I think of it as being a road movie, but really it’s a road movie throughout a city, an adventure that is constantly moving. It is very much about who we are meeting more than where we are going.

Road movies hit me the same way genre movies did, not long after – the fervency to get to the next place and that sense of containment. It’s a bit like watching a car crash happen in real time, and that’s often the literal conceit of a road movie: “Wait a minute, what disaster is going to befall us next?” The same mechanism is what works for horror, thrillers, spookiness.

There was another big inflection point when I was 14 and I saw Vanishing Point and Two-Lane Blacktop. I realized that movies of that era could be challenging and subversive, that I would have to study them in the way I did work by Scorsese, Coppola and the other lions of the American New Wave. When you like movies as a kid, you sort of expect to pick apart “the hits” – the space operas and gangster movies – but when something is left-of-center, it’s an opportunity to personalize, to create a sense of ownership. I already knew that everything had been said and that I was not going to come up with a new idea, but the idea of immersing myself in and challenging myself with something like Two-Lane Blacktop felt very valuable. Vanishing Point is couched in being an exploitation film, but it’s also an adventure movie and a popcorn movie and gets away with being an existential ramble akin to The Swimmer. Vanishing Point gets sold as a sexy adventure when really it’s like an Antonioni film!

I vividly remember going cross-country on a bus a couple of times as a teenager. I had a camera around my neck and talked to people and took pictures of them in a way I don’t think you could do today. This was pre-9/11, pre-cameraphone, so there was an innocence and an idea that all the people on the bus – who couldn’t afford to fly places – were in this together. In my twenties, I started driving and between the ages of 25 and 35, I drove back and forth across the country at least a half dozen times. I don’t know that I ever tried to have an experience that made me feel like I was in a road movie, but I think there was always a sense that there was a freedom people associated with driving across long swaths of the Midwest or of the South, even though it is probably at times a little scary if you’re from New York or L.A. or you’re a Jew or a person of color … But there’s also a real American dedication to meeting people on the road. The benefit of the doubt is alive in America, at least on the road.

One of the decisions to make a road movie as a first feature was based on being acutely aware of how difficult it is to make two people in a room talking to each other compelling to viewers. It felt like the most valuable mechanism was to put these two characters in a car together. To give them places to go, people to meet. And to that end, the other convenient mechanism of a road movie is that your characters are getting somewhere. They end up at a destination. Resolution. I always had a very traditional, earnest concept in my mind that I wanted there to be a happy ending; I wanted it to be a movie about two people coming together. And, of course, that story is incredibly short if you don’t have them working it out; the idea was that they do that over the course of their travels. What’s interesting about Blood Relatives is that it is a road movie, but in the final section, the characters are very stationary and they have to face all the work they did on the road. So, in a way, we break that road movie convention at the end.

When I was writing the film, I had certain specific places in mind. The big one was Ogallala, Nebraska, a place I had landed during a road trip which I thought had a great name. It’s a small town but it has an incredible energy. There was just something about it. Maybe I stopped there and I was just hungry and tired and my heart was a little more open in that moment to this beautiful Midwestern town than it was to any other. But it stuck with me, and I came up with the idea to take the characters in a circle, so they can have their process and then land in a place where there’s nothing to do but face one another. The final destination of the movie is California, which is where so many people’s stories end. That was very much my story, coming from New York to Los Angeles and thinking, “Well, I guess this is it.” Because if you keep going, you end up in the Pacific! Or, if you’re real lucky, Hawaii.

We shot Blood Relatives in the middle of the pandemic. There were vaccines, but we still had all of the COVID protocols and our budget and schedule meant the film couldn’t be a traditional road movie passing through eight or more states. We were lucky to find Taylor, Texas, where one side of the road could be desert and the other a forest, meaning we could shoot a lot there. The actual driving was LED projection, which is today’s answer to rear projection, and we also did day-for-night footage; both of these are tools to wink at the audience, letting them know they are watching a movie. My desire was to always have cinematic gimmicks like the ones I love when I see them in movies. It makes me feel comfortable, makes me feel warm inside. The self-awareness of film is something I love, and I was proud to include it in the movie. 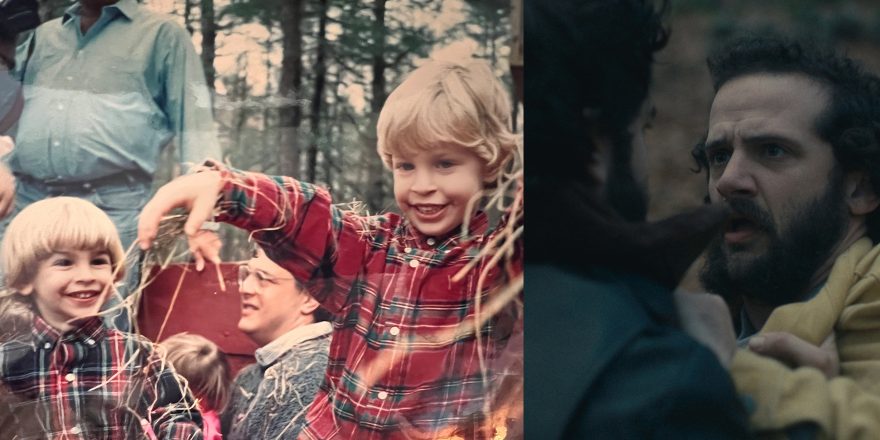 All in the Family: Brotherhood, Addiction and My First Feature