I shall not mince my words. Along with the first four Velvet Underground albums, “Atlantis” by Donovan (1968) and seasons two and three of Minder, I consider the Monkees to be the apex of human achievement. Imagine my excitement when I found out that by, ahem, several degrees of separation I am actually in the Monkees.

I recently guested on the forthcoming offering by my estimable rock & roll friend John Moore (The Jesus and Mary Chain, Black Box Recorder) along with drummer to the stars Brian Young, who I now find out also happens to be on traps duties with everyone’s favourite proto-post-post-modern, avant-garage-boy-band, the Monkees. Thee. Muthafuckin’. Monkees. So my first thought when approaching the new album by my new “bandmates” is: boys, don’t fuck this up or it’s gonna be bad for all of us.

Happily, on Good Times!, the Monkees’ first album in twenty years, Micky Dolenz, Peter Tork, The Nes and dear departed Davy Jones don’t fuck it up big time. If ever a record is “not fucked up big time,” it is this wondrous collection. You see, the Monkees have been smart. Super-smart. What they have done is make a Monkees record. It’s that simple. They haven’t brought in Kanye or Rick Rubin or David Lynch or Pharrell or Michelle Obama. Or Liz Hurley. In fact, there is nothing remotely “contemporary” about the sound of Good Times! (which in itself is very contemporary). If you squint a little, this album could easily have been the follow up to 1967’s Headquarters. The Monkees have done what they always did best: hired in some of the best songwriters (and Noel Gallagher) and the best musicians, and sung the songs with their fantastic Monkee voices.

Again, let me not mince: Micky Dolenz had the finest voice in pop. On album opener and title track “Good Times” — a 1968 backing track co-written by Harry Nilsson no less — Micky proves that, at seventy-something, he still has the finest voice in pop. Thankfully, Micky stays on lead pipes for the next track, “You Bring the Summer,” written by Monkee nut (sorry) Andy Partridge of XTC. It sounds exactly like an XTC Drums and Wires (1979) outtake in the “Life Begins at the Hop” tradition (yes I know that’s a Colin Moulding song — stop shouting at your computer) performed by the Monkees. Which is perhaps what XTC had in mind all along.

The single “She Makes Me Laugh” pops up and makes me laugh with its line about “playing Scrabble with the guys.” Who are these “guys” who play Scrabble ? It’s written by some dude out of Weezer. I know nothing about Weezer except that they have a terrible name. But then, the Monkees have a terrible name. As did the Beatles. And the Crickets. Hell, pop music has just got all-post modern on me again. Anyway, it’s a great track and another fab Micky vocal.

It’s time for The Nes. Yep, Mike “Serious” Nesmith gallops in from Texas and parks his horse in the middle of the elpee with the great “Me & Magdalena.” It’s kind of a hallucinogenic ballad — Guy Clark style. If I weren’t so sure that time is reversing and we are now in 1967, I’d say “download” this one.

The greatness of this album is that it transcends the awful times we live in and the times that it alludes to by the trick of being entirely inauthentic. The Monkees were never real (sorry Mike), so old age and even death are surmountable. Cue Davy Jones — second greatest voice of the twentieth century — singing a Neil Diamond song, “Love to Love,” from the great beyond. It’s fab. I close my eyes and I can see girls in pastel-coloured bikinis frugging furiously and Davy doing that groovy dance with his legs and eyes.

“This is the Traffic News on Radio Haines. Reports are coming in of a pileup on track ten. Police are advising listeners to avoid the area known as ‘Birth of an Accidental Hipster,’ and find alternate routes to the end of the album.”

Noel Gallagher and Paul Weller’s “psychedelic” effort jackknives three-quarters of the way through the elpee. Quite what Weller’s involvement was is unclear, as the track is just pure Noel G. clunk. It’s about nine songs bolted together, a bit of Syd Barrett’s “Matilda Mother” (1967), a bit of “Jesus Christ Superstar,” a rip from Jim Webb’s ”Up Up and Away” (1967), etc. Only one thing can save this track: the voice of Micky Dolenz. And save it it almost does. But, to be fair, “Accidental Birth of a Hipster” is just further evidence in an ever-growing dossier that Noel G. is, in fact, Britain’s Least Psychedelic Man.

The cavalry arrives in the form of Peter Tork (of course) and a blinding version of “Wasn’t Born to Follow” (1968 backing track), which might be the best version of the Gerry Goffin-Carole King classic I’ve heard.

Then it’s down to Mike and Micky to close this most righteous Monkee broadcast of 2016 with two self-penned Monkee magics. Mike’s “I Know What I Mean,” which could be prime Biff Rose, and Mickey’s rueful “I Was There (And I’m Told I Had a Good Time).” Wise Dolenz words straight out of the wise Dolenz septuagenarian brain.

The contenders for the album of the year will no doubt be Dear David’s brilliant Blackstar and Radiohead’s all grown up and “tastefully” experimental middlebrow (yuk) A Moon Shaped Pool. But if we still have to endure such archaic concepts as battles for the album of the year, then my vote goes to Good Times! It’s brighter, more “modern” and equally as retro as any of its contemporaries.

Now — with the good news that I pronounce Good Times! a palpable “hit” and much, much more — it’s time to call a meeting with my bandmates. Micky, Nes, Pete, Davey…if you can hear me? Guys, we’re on fire right now, let’s do it again real soon. But we have to have a serious chat about letting that Gallagher fellow get involved next time… 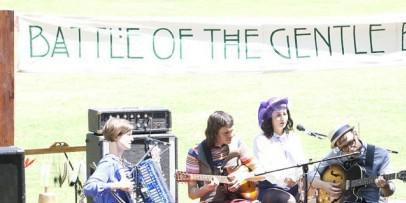