Up until now, I haven’t written about any records for the Talkhouse that could even remotely be considered heavy metal; the main reason being that I simply don’t care to listen to much of the stuff: I play it for a living and I’m constantly surrounded by it on tour. And I’m trying to maintain a little (gasp) journalistic integrity here — it’s hard to write objectively about anyone you have any sort of personal or professional history with — so that eliminates a whole lot of metal bands. Yet another reason is that most metal record reviews are formulaic and self-referential to the point of absurdity; it drives me completely insane. Even if they were open-minded enough to give the genre a try, a person not familiar with the lingo would get absolutely nothing out of most metal record reviews. I’m too well versed in the rather thin metal reviewer’s lexicon to avoid it creeping into my writing. So, as a writer, I didn’t want to even come near any distorted guitar tunes played in lower-than-standard tuning. Too close to metal.

Then I saw that Floor was putting out a new record. Problem solved, so sign me the fuck up, please.

Formed in Miami in 1992, Floor were a band before their time; no one knew where to place them. After a few seven-inch EPs and a stunning 2002 self-titled album, they broke up. Vocalist Steve Brooks went on to form Torche, drummer Henry Wilson formed Dove and House of Lightning, and guitarist Anthony Vialon (also of the screeching low-end Floridians, Cavity) just disappeared from music, as far as I know. In 2009, Robotic Empire Records (shout-out to RVA!) released a ridiculously huge box set of everything Floor had ever recorded, so the band reunited and went on tour to support it. I went to one of those shows, and was struck by how much larger it was than any of the Floor gigs they’d played the first time around.

The reunion tour did well enough to convince Brooks, Vialon and Wilson to record this new record. Oblation does not disappoint, and in such a beautiful way. The first time I gave it a listen, I was driving in rural North Carolina and almost ran out of gas since I blasted it three times in a row and kept forgetting to stop for fuel. I haven’t stopped listening to it since.

It’s a real treat for me to write about a record this heavy. And Oblation is really, really, really heavy. But what the hell is that supposed to mean? In about 10 minutes, I could crank out a two-paragraph write-up that would satisfy most metal magazine editors, neatly cramming the band into a compartmentalized combination of a few of the seemingly endless and ridiculously specific sub-genres that continually rise up like stress-induced acne from the over-analytical minds of OCD metal fans. Then, only because Floor has clean vocals and a hook or two, I would just add the tag “-pop” on the end: “stoner-pop”, “sludge-pop,” “doom-pop”… um, can anyone tell me WHAT IN THE FUCK does any of that mean? It sounds like a bunch of horrible ice cream flavors. Such lazy scrawling would be incomprehensible to the average reader; even worse, it would fail to do justice to the complex majesty of this record.

Oblation is a record that should be heard and enjoyed by more than just fans of the heavier variety of underground music. The tunes are thoughtfully written, beautifully played, and sonically dynamic. Instead of detracting from those qualities, the sheer sonic heft of Oblation‘s songs merely serves to emphasize and expand their effectiveness. Most of the songs could be performed by bands of a much, much lighter ilk and still stand up — but they wouldn’t have the same overwhelming impact if they didn’t rumble the bowels the way they do à la Floor.

In discussing heavy music, there is one song that almost everyone will be familiar with: Black Sabbath’s “Iron Man.” A lot of the down-tuned guitars and drums on Oblation are heavy and slow like the beginning of “Iron Man” — no, I’m not talking about Tony Iommi’s famous guitar riff, I’m talking about the inhumanly deep buzzing of Ozzy’s voice as he intones “I… AM… IRON MAN” into an effects processor. Oblation is heavy in a beautiful way, like the rich, deep, purposeful and serene chants of Tibetan monks, hanging in the Himalayan air during avalanche season like a moment of enlightenment that brings peaceful realization — before causing a rushing white wall of frozen totality to encase the listener. And Oblation is heavy in a physical, visceral way, like the rumbling, tear-stained subway seat you slump down into, weeping as you take the train home across town to your crappy apartment after your girlfriend has dumped you for your best friend. Listen to it at a sufficiently high decibel level and this record will vibrate you. It is heavy, OK?

The opening, title track’s droning riff sets the tone from the get-go — it’s like taking a slow motion swan dive into an Olympic-sized pool filled with mercury and quicksand, but without the inconvenient blood poisoning and asphyxiation. But Oblation isn’t heavy just for heaviness’s sake, it’s heavy because it serves the tunes. To me, this is the thickest rock & roll — rock-solid drums and deep, fuzzed-out guitars — but it’s not heavy metal at all. In fact this record is much, much heavier than a lot of metal. But that still doesn’t say much about the songs themselves, just their tone.

And like I said, just throwing the word “pop” into the mix is not only lazy but confusing as well — what in the hell do you mean by “pop”? Like Michael Jackson? Madonna? The Cars? The Monkees? Justin Bieber? Lady Gaga? Gary Numan? What the fuck? Don’t get me wrong, Floor have indeed constructed a record with a highly refined pop songwriting sensibility. But the kind of pop songwriting I’m thinking of is that eternal record store geek favorite, Pet Sounds. Like that album, Oblation is a spacious record that sometimes explores the idea of slightly varied instrumental repetition to great effect, not just “pop hooks” stacked into a verse-bridge-chorus formula. And, like Pet Sounds, Oblation never dwells too long on one particular mood. That’s what I mean by a “pop sensibility”: artful writing.

While most of Oblation‘s songs hover around the three-minute mark, the album’s crowning achievement is the stunning, almost eight-minute-long “Sign of Aeth.” The song is like a microcosm of the album itself — there’s a lot of variation, both in tone and speed, but these things happen in a logical progression that builds the song; not just as a bunch of reckless tempo changes or haphazard new melodies in an attempt to keep the listener interested. Plus, at precisely three minutes and 37 seconds, is the best of riff of 2014. The lyrics, by Vialon and Brooks, are poetic yet oblique, pleasing to the ear yet pretty wide-open to interpretation. While I’m a bit more pointedly topical as a lyricist, I also know that the most effective lyrics are ones that the listener takes and, internalizing them during the listening process, makes them their own. My own interpretation of these lyrics centers around themes of spiritual reflection, the struggle to grow as a person, and a bit of romantic love, but I could be entirely missing the mark. Besides, that’s not really Important — Floor obviously aren’t trying to make some sort of statement or advance a political agenda with this album. So take the lyrics as you will.

Floor have been classified as a “doom” or “sludge” band countless times; to me this misses the mark entirely. While the guitars are indeed down-tuned so that the riffs reside at a murky subterranean level, the songs on Oblation have a celebratory atmosphere, bordering at times on ecstatic. While I love a good, old-fashioned harsh and misanthropic vibe sometimes, I actually also love feeling happy. And I feel a deep and abiding happiness when I listen to this record; it is so damn heavy while being so beautiful that it literally gives me goosebumps at certain points with every single listen, and this after a few months of the album not leaving my stereo. While Oblation is not perfect (for instance, I could have done without “The Quill,” a short instrumental that seems a bit self-indulgent), it is a fantastic record that I recommend without reservation to anyone who loves smartly executed rock & roll and has the back strong enough to receive it delivered in a ten-ton package. For those people unaccustomed to such stout tunes, give Oblation a listen. Think of it as lifting a few musical weights. You never know, you might just wind up enjoying it. 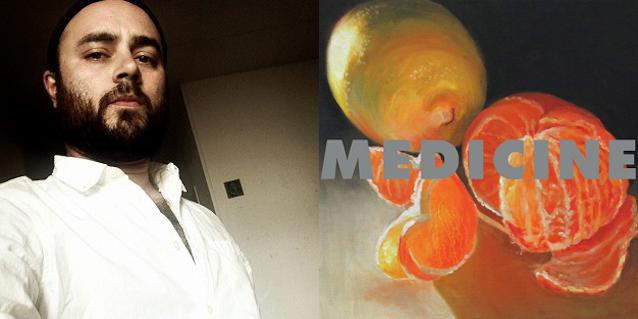