My first musical memory dates from when I was two or three, lying on the couch in my parent’s living room and listening to Beethoven’s Ninth Symphony. I was on my side, and I could see pearlescent orbs and wispy, feather-like streaks of grey and white in front of me. Flutes would sound out in gold light around the pastel swirl of strings. It was like watching an abstract painting in real time.

I called my mother over, asking her if she saw the “pretty lights” in the livingroom. I can’t remember her exact reaction, but it probably involved getting me ginger ale, fearing I had the flu.

That wasn’t where it ended. Soon I discovered the Beatles, and my favourite songs were those which had forest green and navy blue in them. This meant songs in minor keys, such as “Eleanor Rigby” and “I Me Mine.” Then I discovered my mother’s Vangelis album (Direct), and started having dance parties with my brother, sharing our interpretation of which colour went where in each song.

As I grew up, I continued this bizarre cognitive journey of colour and texture. Days of the week (Wednesday is green, don’t even argue with me), numbers (four is grape purple and tastes like icing) and even people ( “Hey man, you have some serious dusty rose undertones going on” — try that one on a first date) all had a permanent assigned colour.

Then came my early 20s and the inevitable drug experimentation phase. MDMA, cocaine and pot entered my social life, opening up a whole new confidence in my discussion of these odd sensory quirks that I assumed everyone else had too. I think I was 22 when I wrote a short Facebook post describing the colours of the week, and the feedback was not what I’d expected! I soon realized that perhaps this was not a normal phenomenon, and I decided to share these experiences with a select few, whom I’d filter out by simply asking, “Do you see colour in music?” A “yeah” would mean the best conversations whilst “popping molly,” as the kids say (try seeing Alice Coltrane’s music; it will change your life), and a nay would simply hint that I should put on my social filter and talk about something else.

What am I going on about, you may ask? Well, friends, there is a word: synesthesia. There’s a good definition here: “A sensation produced in one modality when a stimulus is applied to another modality, as when the hearing of a certain sound induces the visualization of a certain color.”

My name is Louise Burns, and I am a synesthete.

From the moment I became conscious of having it, everything started to make sense. In the studio, I’ve always spoke with “colour language.” To add more chorus to a guitar is to make it more blue and metallic. (Which is sort of a generic description, as most chorus pedals are indeed blue and metallic. Or perhaps it’s a cosmic coincidence?) When I write a song, if the chords do not flow together well, it will take on a swamp-like quality. The G chord, for example, is a rich citrus orange and is smooth to the hypothetical touch. To add an F to the progression adds a pinkish undertone, and in order to keep the song from getting too bright and garish, I have to add a calming-colour chord to balance it out. The E chord, a deep ocean blue, is a good way to ensure the progression doesn’t become too saccharine. If a kick drum is too dull, it sounds like a mushroom tastes. No, not that kind of mushroom.

I’m not alone, and not just because my brother is also a synesthete — no one is when they have the internet. Jimi Hendrix famously referred to E7 (#9) as “the purple chord,” using it for inspiration to write “Purple Haze.” Dev Hynes of Blood Orange talks about his synesthesia too in a recent lecture at New York University  “The best way for me to describe what’s in my head,” he said, “is that it’s like streamers floating around or, say, a painter.” He goes on to talk about the role of synesthesia in scoring motion pictures, specifically Gia Coppola’s 2013 film Palo Alto, for which he did the music.

My good friend Dave “Rave” Ogilvie (he’s done a bunch of production work for Nine Inch Nails, Skinny Puppy, and Killing Joke) worked with Trent Reznor on part of the soundtrack for David Lynch’s 1997 film Lost Highway. He recalls Lynch coming into the studio one day and asking him to make a track “more purple.” Rave later produced my first record, and when I would ask him how we could make a drum sound “more burnt sienna than gold,” he actually knew what I was talking about.

As I gently suggested before, synesthesia is not just a colour-to-music phenomenon. There’s an entire spectrum, which can occur between any two senses. It is why some people taste words (lexical-gustatory synesthesia) or see different days of the week or numbers in colour (grapheme-colour synesthesia). Certain minds can remember pi by a spatial sequence (number-form synesthesia) — that is, see numbers in a landscape-like setting. There’s a fascinating documentary about that form of synesthesia called Born on a Blue Day, starring Daniel Tammet, an autistic savant who can essentially do any calculation in his head without using a calculator. He also holds the record for reciting pi from memory up to 22,514 digits, which is to say, for five hours and nine minutes. He talked about exactly how he does this at Pi Day last year in Paris. “What my brain was doing was inventing a meaning, like a story,” Tammet said. “What I did was make a poem or a novel out of pi, and took those colors and those emotions and used them to perceive patterns, or at least to perceive patterns in my mind that were memorable, that were meaningful to me.”

Synesthesia has always played an important role in the arts. One simple Wikipedia search and you can even see a list of notable synesthetes such as Duke Ellington, Olivier Messiaen, and Marilyn Monroe. Charles Baudelaire touched upon the phenomenon in Les Fleurs du Mal: “Métamorphose mystique/De tous mes sens fondus en un!” (Which roughly translates to: “Mystical metamorphosis, all my senses become one!”) Sir Isaac Newton claimed that certain colours and musical tones shared frequencies. Even ol’ Vladimir Nabokov famously spoke of his grapheme-colour synesthesia. In a 1962 interview with the BBC, he was asked what colour his own initials were: “V is a kind of pale, transparent pink,” he replied. “I think it’s called, technically, quartz pink: this is one of the closest colours that I can connect with the V. And the N, on the other hand, is a greyish-yellowish oatmeal color.”

I could go on about this all day, but alas, there’s a foggy sunrise out, and I have to listen to “Running Up That Hill” to reflect that. You can read more about the relationship between the brain and music via Oliver Sacks, or next time you find yourself overwhelmed by puke yellow and Pepto-Bismol pink while listening to Ke$ha, just know you are not alone. 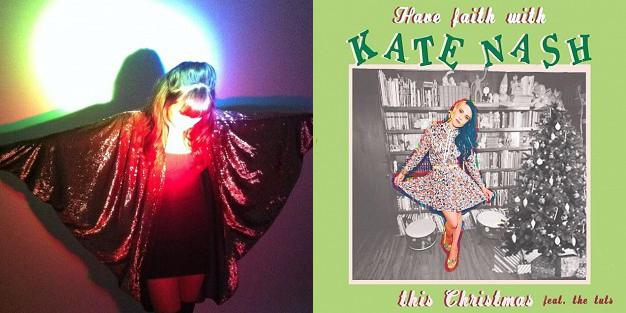