This is an essay about Kate Nash’s Christmas EP Have Faith with Kate Nash This Christmas, but let me first take a moment to tell you about myself — because Nash and I have shared a few parallels throughout our careers, and that’s what drew me to her in the first place. I’m a singer-songwriter-type living in Vancouver, British Columbia, who, whilst still a teen, was signed to a major label with my first band Lillix and became an MTV darling for about 15 minutes. I lived in a high-gloss neon bubble of bullshit and excess until I finally quit almost a decade ago and decided to do it on my own.

Enter Kate Nash. In 2007, she released her mega-hit “Foundations,” which hit #2 on the UK pop charts and sent her debut Made of Bricks all the way to the top. She was the quirky girl from Myspace; the edgy girl next door armed with polka-dot skirts, pianos and F-bombs. She, along with her Myspace top friend Lily Allen, created the genre I like to call “Myspace Pop.” It was the kind of revolution that had record labels scrambling to re-create the success of Nash and Allen by faking the credibility and “DIY” background with newly signed artists. We even see echoes of this today. ([cough] LANA DEL REY [cough]).

But instead of succumbing to the formulaic, almost predictable success that re-creating her first record could bring, she decided to open up her young mind; employing Bernard Butler from Suede for her second album My Best Friend Is You and exploring different influences and sounds. Her most recent record Girl Talk even gets into riot grrrl, punk and Motown. As someone who also grew up in this questionable industry, I have an undying respect for her ability to take what she had and build a career for herself on her own terms. Nash has created her own universe, and instead of making her own line of tampons or perfume or whatever Jessica Simpson is up to these days, she spends her free time with her after-school music club and writing songs for a Broadway play. Just casual, 22-year-old-girl activities. (God, I feel old and unaccomplished just writing this!)

So what’s the point of summarizing the merits of Kate Nash? Because it is her personality, her history and, dare I say, empowerment that makes this Christmas mini-album work.

It’s actually quite impressive how dynamic she keeps this five-track EP. “Silent Night” and “Auld Lang Syne” take on a more traditional production, the latter heavy on the harmonies like a choir of Kates singing over an occasional kick drum and dissonant shruti box-like drone. “Silent Night” sways to an acoustic guitar and sparkly reverb, which is pretty standard, but you can’t fuck with the classics I suppose.

The album also includes three originals. “I Hate You This Christmas,” the opening track, is a Punky Brewster-type of pop delight about her boyfriend fucking one of her friends. (Ahh, there is the F-bomb I was looking for!) “Christmas Is in the Air” takes a sort of lyrical opposition to “Silver Bells,” shunning overpriced pretty things over an acoustic verse and, when the chorus kicks in, “rocks out,” as the kids say, with help from the Tuts, turning everything all punk-poppy. That’s not an easy feat to accomplish with a Christmas song; I can’t help but admire what a merry old time they are having. Nash delivers the songs with a pretty-yet-brash confidence, a defining quality in her music that some artists take years to uncover. Songs and production aside, what’s most important is that you just know that she made a Christmas album because she wanted to, not because her label brought it up as a cash-cow, mega-profit idea.

Now, I should mention, I kind of hate modern Christmas songs. I can’t handle the singer-songwriter sentiment, tickling the ivories with a furrowed brow, reflecting on snowy pavements, fireplaces and eggnog and blah blah blah, puke, etc. But Nash does something original with the theme. The classic songwriting of heartbreak, rage, jealousy and, at times, pure joy are all apparent here.  I like this album! I mean, it won’t replace my Phil Spector Christmas playlist, but I see the appeal. Again, any other artist may have lost me after hitting the first power chorus, but I think Kate is charming. I’m drawn to her self-assuredness and I hope that a young teen will listen to this instead of Jessica Simpson (sorry, I keep using her as a negative touchstone, but I think she’s just gross), start a band and make their own Christmas EP about shitty boyfriends and trying not to get sad. I HAVE FAITH IN KATE. And so should you. 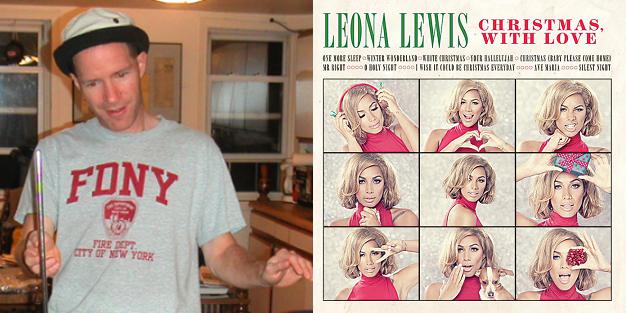