Listen, I can’t justify the fact that I spent a good deal of time and effort locked in my tiny bedroom making a nearly nine-hour conceptual playlist called “pop punk: 2000-2020.” I can only attempt to explain myself. Will it be convincing? I doubt it. But in this depressing world, all any of us can really do is try.

For the past few years, I’ve been thinking a lot about rock & roll, and what it means to make it now. Have there been any truly “new” developments in the genre over the past 20 years? Maybe not. Has there been a lot of good rock music made in that time, though? No doubt. There’s been a ton of it — too much for anyone to even attempt to ingest in full, spread throughout all imaginable sub-genres. Some of rock’s most enduring stylistic ticks have been swallowed by rap and electronic music, while other genres have gotten progressively more niche, still pleasing the true heads but often offering diminishing populist returns.

I would be lying if I was thinking too hard about any of that shit when I started putting together this playlist. I was intuitively guided by a deep-seated feeling of what I think it means to make pop punk, which broadly speaking has always been one of my favorite strains of rock & roll. In retrospect, I think I was trying to take a non-judgmental look at the genre, one where all permutations of the style were accounted for and treated with the same level of respect.

I’m talking pop punk in the widest sense of the word. Power chords, annoying vocals, big hooks. Drums that make me wanna jump on my bed like a jackass. Maybe some lyrics about being a confused kid, sung by a confused adult. That kind of thing. Obnoxious pop. The fact that rock music moves so slowly nowadays means that it’s a lot easier to make connections between formally disparate styles. None of this shit matters all that much anymore, so lets have some fun. Instead of clinging to some record collector mentality, it is time to admit that The Spits and Avril Lavigne are on the same level.

To that point: the melodic soundcloud rap of Lil Peep and Lil Tracy? Obviously pop punk. “Since U Been Gone” by Kelly Clarkson? That’s pop punk. The Strokes made music that influenced Clarkson’s masterpiece — their song “12:51” made the playlist. I wanted the slick Alternative Press/Warped Tour axis of the genre just as accounted for as damaged legends like Tyvek and Japanther. “Shut Up” by Kelly Osbourne — thanks to Kyle Mabson for reminding me of that classic — is clearly just as worthy as “Glad Girls” by Guided By Voices or Young Thug’s Sublime-esque “Wyclef Jean.” You might disagree with some of these categorizations, but the larger point here is that I’m trying to create a new kind of big tent. I think I’m just scratching the surface, too. This thing is almost nine hours long. Dear god!

Once I got started, it was hard to stop. I began to see the tropes of pop punk everywhere, from rap to EDM to actual pop. It almost started to feel like a form of vernacular music, endlessly moldable to different sounds and applications. In that sense, Jay Reatard’s “Not a Substitute” flowing into Icona Pop and Charli XCX’s “I Love It” felt like a referendum on just how broad and inspiring the pop punk parameters can be. That transition came to me during a long walk through Queens, high on Dunkin’ Donuts, beta testing some version of the playlist on shuffle. Like I said, I spent too much time on this thing. Luckily, I barely have a life and essentially exist as an overgrown teenager. I’m the perfect person for the job.

It seemed fitting to end the playlist at 182 songs. I probably could’ve kept going forever. One dream would be for this thing to provide some minor amount of inspiration for anyone out there making pop rock in the most general sense of the word. If we can make connections between music that ultimately is more alike than different, maybe we can find a way to create something new and exciting. But my gut tells me that in this confused, dark era, the idea of “cutting edge music” isn’t nearly as important as the feeling you get when you are at a show or walking around listening to the best song from some semi-obscure basement pop punk band. So tonight I’m going to load up on Dunkin’, blast my own playlist and walk around until I feel like I’m going to pass out. I’ll see you in the pit! 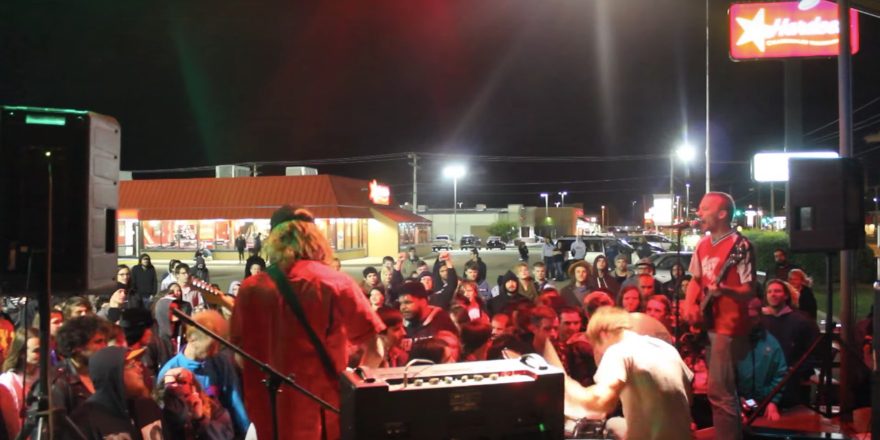