My childhood was a nonsensical blur of VHS tapes. I can’t recall exactly how many – or exactly which ones – my family owned, but I do distinctly recall building a fort of them sometime in the late 1980s, and being pretty goddamn impressed by the size of said structure.

The tapes I actually remember owning were special. They were the unforgettables, not necessarily because they were good films, but because my eyes couldn’t scan past their boxes without lingering on their insane titles and glorious art. These were films with names that shocked and repelled, films that family friends would quietly snicker at when they saw them stacked on our shelves.

And a good number of them were by Herschell Gordon Lewis.

Lewis, who passed away Monday morning at the age of 87, was an inescapable part of my youth. An unabashed fan of sleaze and goofy ultraviolence, the ex-ad man made his greatest mark on genre film in the early ’60s, producing and directing a number of nudie cuties with pal David F. Friedman before discovering an untapped market of bloodthirsty horror fans, desperate to witness the blood-red violence only previously implied in mainstream cinema. His debut horror feature, 1963’s Blood Feast, is remembered as the first “gore film” – and its success on America’s fledgling grindhouse circuit inspired Lewis to continue churning out the gore for nearly a decade before returning quite contentedly to the advertising industry.

With titles like Two Thousand Maniacs!, Color Me Blood Red and The Gore Gore Girls, Lewis’ films walked an amusing, strangely non-threatening line between comedy and horror, revolting and terrifying their unsuspecting audiences, but always with a knowing wink. Herschell was less boogeyman and more carnival barker, a good-natured nerd whose cinema wallowed in busty women, nefarious men and buckets of bright red blood.

But this isn’t an obituary.

Plenty of people out there know far more about Herschell Gordon Lewis than I do.

As a burgeoning horror obsessive, I’d spend incalculable hours in the spookiest aisle of my local video store, studying every tape there from every angle possible, scribbling detailed notes on a tiny pad of paper I kept wedged in my back pocket. I cannot remember many of the things I wrote down, but to this day, I vividly remember the tiny, worn page that read, “The Wizard of Gore – do NOT flip over.”

Lewis’ ramshackle 1970 farce, about a magician who dismembered his female volunteers in front of an unsuspecting audience, was not a good film. It did not have believable performances. It was not lensed by a competent cinematographer. But it had gore.

Gallons and gallons of glorious gore.

I still vividly remember the day I flipped over the Wizard of Gore VHS box and there, smiling sardonically back at me on its rear cover, was a mustachioed man in a top hat, gripping a handful of red goo recently extracted from the chest of a young woman. I was petrified, but didn’t know why. I’d seen countless horror movies by that time, many of which were far more violent than the image on the back of the box. But it paralyzed me. Something about the casual smile on the man’s face coupled with the dead woman’s vacant stare almost immediately made me place the tape back on its shelf and shuffle nervously away. As I did, I pulled out my notebook and scratched down the above message to myself.

As the years went by, I built up the courage to watch The Wizard of Gore … and was – quite expectedly – nowhere near as disturbed by the titular splatter as the back cover made me believe I’d be. But much like Lewis’ other films, it was singular. It was an unforgettable.

While I can’t say I was ever an obsessive devotee of Lewis, his slapdash, wildly amateur films had an impact on me far greater than the refined works of his peers – or even the greats that should have inspired me in my youth. As I tweeted when I learned of his death, the films of H.G. Lewis had more of an impact on my impressionable young brain than Spielberg, Lucas or Scorsese.

He was one of us: a pervy, splatter-loving geek who wasn’t out to win awards, but lived simply to entertain. He was a lifelong Southerner who wallowed in the ridiculousness of Southern pride, poked fun at every form of political correctness, and was so on the cutting edge of horror, he managed to perfectly spoof the tropes of The Texas Chain Saw Massacre 10 years before Tobe Hooper even made The Texas Chain Saw Massacre.

Decades after leaving horror, Lewis hung lovingly onto being “The Godfather of Gore,” a much-cherished moniker his fans and peers had bestowed upon him for ushering in an entirely new subgenre of cinema. When I stumbled across him in a Toronto airport in 2007 (my one and only encounter with the man), words failed me. I walked up to Mr. Lewis, smiling oafishly, and managed to squeak out, “Thank you for all the movies, Godfather Lewis.”

He smiled broadly back at me, his 78-year-old face glowing with the enthusiasm and life of a doe-eyed teenager. He reached out, clasped my trembling hand in his, and said, “Are you one of my godchildren? You’re very welcome!”

When news first broke on Monday morning, mere hours after Herschell passed, I thought, “There’s no way the trades will report on this.”

Hours later, Variety, who had panned his work since day one, had written a warm obituary.

“Wow. People care,” I thought. “People actually care about one of us.”

Herschell Gordon Lewis was a kind, funny man who made mean, creepy films. He made me laugh and he made me scream. He was never a wealthy man, but he did what every entertainer dreams of doing. 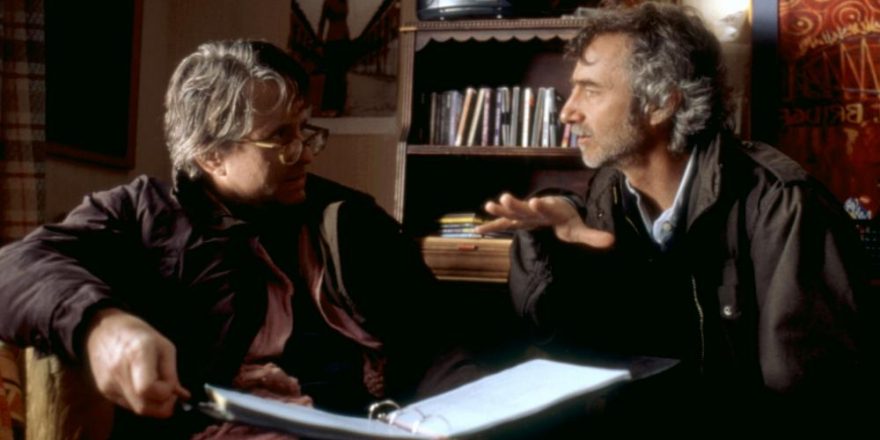