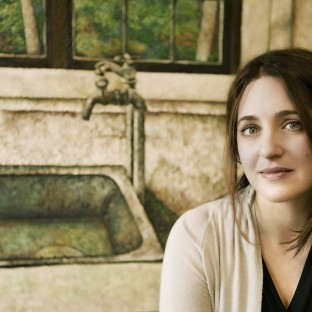 Simone Dinnerstein is an American classical pianist, born in New York City, USA. Her father, Simon Dinnerstein, is a painter. She studied in the precollege program at the Manhattan School of Music with Solomon Mikowsky. She later attended The Juilliard School of Music and was a student of Peter Serkin. She also studied in London with Maria Curcio. In addition to her solo recital work, she has been a featured guest artist at the Bard Music Festival, as well as appearing as a chamber musician in performances of contemporary music, including works of Yehudi Wyner and Ned Rorem. Dinnerstein has become celebrated for her interpretation of Johann Sebastian Bach's Goldberg Variations in concert. In addition, Dinnerstein made a recording of the Goldberg Variations in March 2005, with financial assistance from friends. At the time of the recording, she was pregnant with her son, Adrian. While this recording helped to spread her reputation and increased her concert engagements, it was not until August 2007 that this recording received commercial release, on the Telarc label (Telarc CD-80692). In its first week of commercial release, the recording was at #1 on the Billboard classical music CD sales chart. Her previous commercially released recording was with the cellist Zuill Bailey of the chamber music for cello and piano of Ludwig van Beethoven, for the Delos label (DE 3368). Dinnerstein, her husband Jeremy Greensmith and their son live in New York City. Read more on Last.fm. User-contributed text is available under the Creative Commons By-SA License; additional terms may apply.

My husband will, on occasion, wax lyrical about British autumn afternoons, sitting, as a toddler, next to his mother and listening to her play...