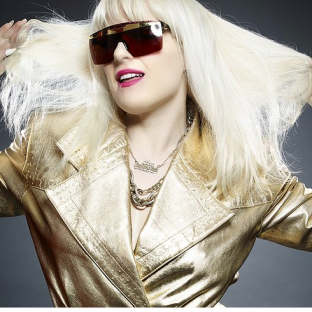 Princess Superstar (born Concetta Kirschner) is an American rapper of Jewish-Italian heritage from the suburbs of Philadelphia. She calls her music - a mixture of hip hop, rock and electronica -"flip flop." After graduating from high school, she moved to New York City and studied acting at New York University. She also learned to play the guitar and sent a demo tape to the College Music Journal and Grand Royal, a record label headed by the Beastie Boys. Her debut album, Strictly Platinum, gained her some notoriety for being one of very few white rappers, as well as for her openness regarding her Jewish heritage and gender-related issues. Princess Superstar has collaborated with Kool Keith, Jon Spencer, MC Paul Barman, the High and Mighty, The Prodigy, Moby, Disco D and others. Some of the producers that worked with her include Prince Paul, Curtis Curtis, Beth Orton, Arthur Baker, Jacques Lu Cont, Junior Sanchez, Todd Terry, and DJ Mighty Mi from the High and Mighty. Her biggest single so far has been "Bad Babysitter," which was chart position #11 in the UK. In 2007, a mash-up was created using Princess Superstar's "Perfect" and "Exceeder" by DJ Mason. The resulting track was called "Perfect Exceeder." It has become another one of Princess Superstar's top songs. Read more on Last.fm. User-contributed text is available under the Creative Commons By-SA License; additional terms may apply.

Now that it's OK to be into both club music and hip-hop, the world is FINALLY ready for Le1f.
He has a bigger budget now, but Action Bronson still doesn’t take things too seriously on his major-label debut.
Eminem might have broken down doors for Princess Superstar, but she still thinks he needs an editor.
I freakin' love summer. I love that you can just wear basically nothing and don't have to put on a coat and, like, five million other things that...
I live on a prime Upper East Side block in New York City, between Fifth and Madison, in a one-bedroom apartment with my husband and two-year-old.