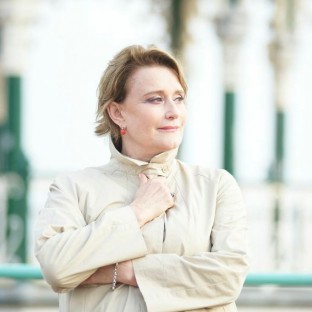 Linda Thompson has been at the forefront of British folk music longer than she would care to remember. With her (ex) husband Richard she recorded a string of classic albums, including the ultimate break-up record: 1982’s Shoot Out the Lights. Her latest solo record is 2013’s Won’t Be Long Now (Pettifer Sounds) and she appears with her children, grandson and Richard on the forthcoming Family (Fantasy Records/Concord Music Group), produced by her son Teddy. You can follow her on Twitter here.

Linda Thompson (born Linda Pettifer) started her singing career in the 1960s, doing advertising jingles for money and singing in folk clubs for enjoyment. She changed her name to Linda Peters, and was romantically linked to Martin Carthy before working with Richard Thompson, whom she married in 1972. As part of Richard & Linda Thompson she sang on a string of critically acclaimed albums until a bitter split in 1982. After battling voice problems over the years since, she resurfaced with a solo album in 1996, and has worked sporadically since. Linda and Richard's children Teddy Thompson and Kamila Thompson are both involved in music. Read more on Last.fm. User-contributed text is available under the Creative Commons By-SA License; additional terms may apply.

The English folk-rock legend reflects on the new album by the Canadian singer-songwriter legend.