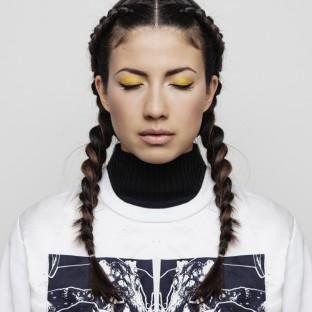 @rhiannonlucyc Have you read Night Waking, so so good

Emmy the Great is the stage name of London-based singer-songwriter Emma-Lee Moss (born in 1984 in Hong Kong). Her albums include First Love (2009), Virtue (2011) and Second Love (2016). Moss was born in Hong Kong to an English father and a Chinese mother and was into music from a young age. She emigrated with her family to London at the age of 12. Moss started performing in 2005 and her first release was the Secret Circus EP the following year. In 2007 Moss performed with Lightspeed Champion, alongside Florence Welch (of Florence and the Machine) . She has also played with Noah and the Whale. She has not been a permanent member of either line up. After a series of further singles and EPs, Moss' début full album First Love (Close Harbour) was released in February 2009. The album was ranked by The New York Times at #7 in their list of "Best Albums of the Year 2009." Moss' band has included Euan Hinshelwood (of Younghusband) and Tom Rogerson (of Three Trapped Tigers). Moss' second album, Virtue, was released on 13 June 2011. It started out as a third person project, however, the religious conversion of her fiancé and their subsequent break-up inspired her to take a personal approach towards her song-writing. Read more on Last.fm. User-contributed text is available under the Creative Commons By-SA License; additional terms may apply.

The Christmas single by the Flaming Lips and Yoko Ono is a reminder that music is one of the only environments in which futility cannot exist.
Is Majical Cloudz' album bold? Yes. Is it boring? Yes, but ultimately, it reminds us of something very important: that we are alive.
Musicians not only hasten gentrification, they also endure the consequences of it. Here are some helpful tips for weathering the skyrocketing rents.
The London anti-folk star explains why, if Reclassified had been released a year earlier, she might be dead right now.