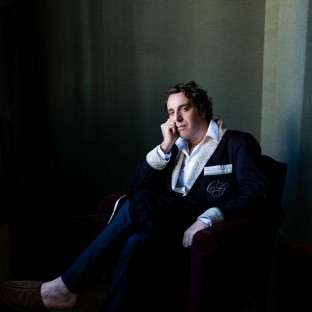 Since the release of 2012’s acclaimed Solo Piano II, Chilly Gonzales composed the best-selling book of easy piano pieces Re-Introduction Etudes, produced and released Octave Minds, the piano-meets-electronica album with Boys Noize and devoted himself to finding a modern take on chamber music. The result is Chambers, out March 24, 2015, an album for piano and string quartet. Inspired by the deepening relationship with Hamburg’s Kaiser Quartett, the album re-imagines Romantic-era chamber music as today’s addictive pop. Gonzales holds the Guinness world record for the longest solo concert: over 27 hours. He’s collaborated with with Jarvis Cocker, Feist and Drake, among others. He won a 2014 Grammy for his collaboration on Daft Punk’s Random Access Memories. With “Never Stop,” he composed a global hit for the inaugural Apple iPad campaign. You can find Chilly on Twitter here, Facebook here and his website is here.

A Canadian multi-talented musician / producer (born Jason Charles Beck, aka Chilly Gonzales), known for his MC & electro albums (i.e. "The Entertainist" & "Presidential Suite".), plus his comical live shows. He is able to play the piano, guitar, bass, drums & various brass instruments. In the 1990s, he was the leader of the alternative rock band Son before embarking on his solo career. Early in his solo career, he toured with Peaches (Merrill Nisker) and the press nicknamed them the "Bonnie and Clyde of prankster rap." The duo moved from Berlin to Paris in 2003, eventually recording with French pop icons like Jane Birkin. He also has collaborated with Feist, Mocky, and Jamie Lidell. In 2005, Gonzales stunned his audience by releasing one of his most memorable and distinctive albums to date: 'Solo Piano'. The 16 themes for left hand accompaniment and right hand melody are delicate and reminiscent of Erik Satie and Maurice Ravel's lilting tones and show influences of Canadian folk and American jazz. He lived and worked in Paris for many years and collaborated with bands like TTC, Katerine, -M-, etc.. and released an album entitled 'Soft Power' on April 7th, 2008. On May 18, 2009, at the Ciné 13 Théâtre, Paris, he broke a world record for the longest solo-artist performance, playing the piano with a total time of 27 hours, 3 minutes and 44 seconds, breaking a record originally set by Prasanna Gudi. In 2012 Gonzales moved to Cologne, Germany. Once working as a piano accompanist to silent films, Gonzales has come a long way from being a Berlin-based underground entertainer. -------------------------------------------- 2) An Italian punk 'n' roll band. Read more on Last.fm. User-contributed text is available under the Creative Commons By-SA License; additional terms may apply.

Who is Big Sean? Is he a “heel” or is he a "face”? Maybe the gifted Detroit rapper's new album reveals what makes this guy tick.