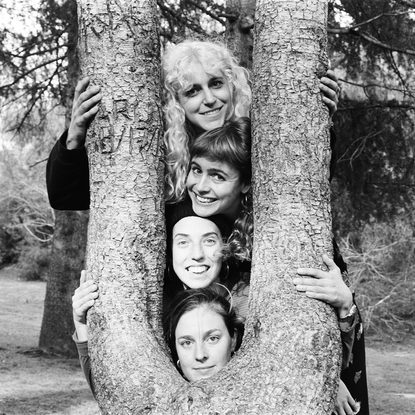 Chastity Belt’s energy is like a circuit, circling around the silly and the sincere. Tongue-in-cheek shit-shooting and existential rumination feed into each other infinitely.

Theirs is a long-term relationship, and that loop sustains them. That’s a creative thesis in and of itself, but isn’t that also just the mark of a true-blue friendship?

The band talks a lot about intention these days — how to be more present with each other. The four piece — Julia Shapiro (vocals, guitar, drums), Lydia Lund (vocals, guitar), Gretchen Grimm (drums, vocals, guitar) and Annie Truscott (bass) — is nine years deep in this, after all. It seems now, more than ever, that circuit is a movement of intentionality, one that creates a space inside which they can be themselves, among themselves. It’s a space where the euphoria of making music with your best friends is protected from the outside world’s churning expectations. It’s a kind of safe zone for the band to occupy as their best selves: a group of friends who love each other.

Their fourth record, Chastity Belt, comes out of that safe space. With the luxury of spending several weeks in the studio with Jay Som’s Melina Duterte, Chastity Belt was able to experiment. The result is their most sonically developed and nuanced record yet; one that’s not only a product of, but a series of reflections on what it means to take what you need and to understand yourself better.

RT @brickdickbanksy: im gonna blast pussy weed beer by chastity belt down the halls of the student center to get people to come to my show.…

On writing, collaborating, and being Zorked.
Julia Shapiro and Gretchen Grimm profess their love for Ren fairs and a pair of identical twin harpists.