Sakheni Dlaminiis a Swazi professional who holds an MBA in Entrepreneurship and Marketing from Simmons College in Boston. She has worked in both corporate and rural development settings, managing projects, facilitating discussions and implementing programs across Swaziland. Dlamini specializes in economic strengthening and has a passion for empowering women and students in their communities. Liyana is her first film production.

Watching my mother struggle to raise five children in a tumultuous home has driven me to be an advocate for entrepreneurship and women’s economic empowerment. After I lost my mother when I was 16 and my father when I was 19, I was taken in by a family and embraced as a sister by their three children. These adopted parents of mine later established a 195-acre farm with four homes for children who are orphaned, abandoned or have no other alternative for care. These children are the storytellers in Liyana, a documentary/animated film I produced about a group of children in Eswatini who turn past trauma into a collective fairytale about a girl on a quest to save her young twin brothers.

My father grew up on a rural homestead in Eswatini during a time when missionaries ran the best schools in the country. He studied and read Latin, was intelligent and quick-witted, and in his youth he had wanted to become a doctor. I always wonder what would have happened had my grandmother provided the £1 he needed to send his application to medical school. How different would he have been? How different would my life have been? Would it have saved my mother, brother, and sisters from a fraction of the horrors he visited upon us?

As a child, I would often daydream, wishing, hoping, and making all sorts of pacts with God and the universe that my mother would leave my father. I dreamed that we would all steal away in the dead of night and never have to see him again. But like a good, dutiful Swati woman, my mother believed she was doing her best for us by staying with him. See, she was a primary school teacher and couldn’t afford to take care of five children on her paltry salary. She felt she had to stay with him for financial security. It’s hard for me to believe in that reason, though, because while she didn’t earn much, she would save every last penny to put us through school and feed us, and I don’t remember my father’s efforts matching hers. As an eight-year-old, I was never privy to any discussions about the household budget, but I could see how things played out. My father would get his monthly paycheck on a Thursday and he’d be giddy just thinking about the weekend when he’d be off work and free to start one of his drinking sprees, taking us children with him for “protection.” Though I was afraid, I confess to looking forward to these outings because he would bribe us with chips, chocolates and soda. Our fear was not a bad price to pay for all the tasty treats you can stomach in one night.

It was so easy for him to spend the whole weekend drinking himself into a stupor and extending his generosity to his new friends everywhere we went. In public, he was by far the most delightful and popular alcoholic around. One weekend when I must’ve been eight years old and my brother was probably 10, we boarded a bus to visit our extended family in the rural areas. My father was so generous that he literally handed out wads of money to every single person on the bus (always the quickest way to win friends and influence people). He called me and my brother his “bodyguards.” We were supposed to look out for him and make sure he didn’t get mugged or taken advantage of … I guess? Naturally, my brother and I were wide-eyed on this bus ride. We’d never seen so much money in our whole lives, and here was my father doling it out like it was falling from the sky. We must have been good “bodyguards” because we were rewarded with our own little stash after that bus ride. Knowing that my mother needed this money more than we did, my brother and I readily declared our “rewards” when we got home and gave all the money to her. (OK, I might have kept a little for myself. Even as a child, I was hyper-aware of the value of money, and the freedom that comes with having plenty of it.) So I wonder, would my mother have stayed had she only had one child instead of five? Would she have stayed had she earned more money? Would she have stayed had she earned more money than he did? Would she have stayed?

Today, in my adulthood, I still struggle with my feelings towards my father. I could easily say I hated my father, but that is so far from the truth. My father reveled in inflicting pain, suffering, shame and humiliation on his immediate family, particularly on my mother and older siblings. Yet I loved him, and still do. I remember in his most violent episodes, my mother would find a way out and be the first to escape. If we (the kids) were lucky, we would also steal away, following her cue. What I cannot figure out to this day is how we regrouped in the dead of night, every time. We never had a convening spot for the inevitable times that we would have to flee, but somehow my mother would always find us. There were many nights that we fled, clambering through hedges and leaping over fences to sleep out under the stars with nothing but the clothes on our backs, mosquitoes buzzing all night, and our bodies nudging slithering snakes from their slumber. Our neighbors must have grown weary of helping us; my mother had run to them too many times. I suppose people’s compassion wears thin and they start to expect you to decide to take action for yourself. I know that as we got older, we got impatient with my mother as well, we were so tired of the abuse and mayhem; still my mother stayed. It wasn’t until she died that I understood without a shadow of doubt that she had stayed one lifetime too long. 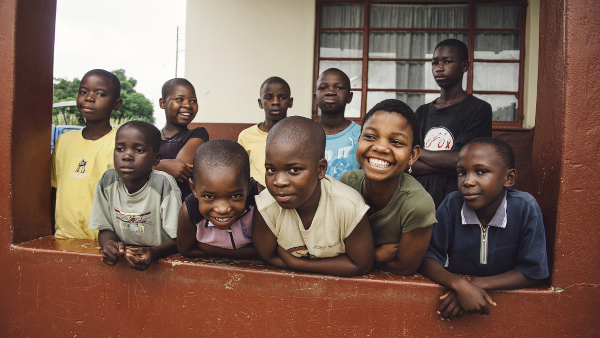 In Liyana, one of the young storytellers says, “Sometimes a family’s story can end sad.” He would know. His story and my story, Liyana’s story and the stories of so many others could end like my mother’s did, but we choose instead to summon the strength to write our own stories, to end them well. Liyana’s story picks up threads of my and the storytellers’ personal histories in so many places that we feel she comes to represent us, embody and personify our very beings. Liyana has clothed us in anonymity and enabled us to expose our dark places, to uncover where we’re vulnerable, scared and ashamed. This film has given us a character that can lay bare our souls and help us safely share our experiences honestly and vividly. The wounds of a traumatic upbringing take a lifetime to heal, a lifetime of patient cleaning and dressing, digging out the festering, fetid parts and lovingly cultivating the regrowth of new tissue. But, even as the film shares our wounds, Liyana has given us a remarkable heroine who brings our fanciful imaginations, hopes, dreams, and our strength to the world.

The children in the film and the little Sakheni from many years ago have been so fortunate to be given a second chance, a second life, in a stable family environment where we feel and experience consistent and abundant love. Against this backdrop, we also recognize the sense of power in the choices we make every day that shape our futures. Liyana’s final battle to save herself and to save the children in the film becomes a battle to save all of us. Powerless, beaten and abused, Liyana could have succumbed to her fate. She could have given up. But, she decides that her story will not end this way. She chooses to fight, to win. She tells us that we can also choose to fight.

This is Liyana’s critical lesson: Given any circumstance, we always have a choice, and there is power in that choosing. It may seem a simple choice, but the choice changes everything. I could choose to be despondent, rile at the unfairness of life, let the bitter bile of injustice rise up and consume me, or I can choose to fight. I can choose to show up, do the hard work, get on my feet, keep fighting and moving forward. In order to survive, Liyana, her storytellers and I must make difficult and at times unpleasant choices, sacrifice short-term gratification and distractions and muster the strength to forge ahead. There are no shortcuts, and each one of us has to do the work to heal, to cast a vision for our lives and to walk diligently toward that vision.

I am so eager to see what courageous choices Liyana’s storytellers will make as they each continue to write their stories, to see how they take their life experiences and use them to do better for themselves, to work towards their goals and benefit others. But above all, I am listening for the voices of children who have gone unheard, children who will see Liyana and realize she is speaking for them as she has spoken for me, showing them their own strength and giving them the power to write their own stories.

Sakheni Dlaminiis a Swazi professional who holds an MBA in Entrepreneurship and Marketing from Simmons College in Boston. She has worked in both corporate and rural development settings, managing projects, facilitating discussions and implementing programs across Swaziland. Dlamini specializes in economic strengthening and has a passion for empowering women and students in their communities. Liyana is her first film production.