I felt some trepidation when I first witnessed the magic of a Buster Keaton film. I loved the guy so much I thought my primordial brain would copy all his gestures, gags and facial expressions, and then as if under a spell by a superstitious grandma I’d turn into a Buster Keaton look-alike hired for birthday parties or office celebrations. I intentionally learned about Buster after I made a bunch of silent comedies. And so I avoided the spell. But not really.

Buster put a spell on all of us. He charmed the teachers of clowning, acting and film. He awed the stuntmen. He informed the directors, he encouraged the comedians, he wowed (some of) the critics, he connected to the human being. My friend’s friend introduced my friend to Buster, then my friend introduced Buster to me, and now I’m introducing Buster to my sons. One of my sons always asks, “Is that really him?” when Keaton falls down the side of a building, or grabs the back of a speeding car and catches a ride, or when he balances on the handlebars of a motorcycle through town over bumps and railroad tracks. He was the ultimate performer, a comic daredevil. Buster Keaton didn’t need a green screen. He faced the cliffs, the trains, the ledges with a jiggle in his knees and a spring in his step. He just jumped, and fell, and jumped and fell. He did it for real. And he did it for a laugh.

In the 1920s, Buster Keaton was a superhero. He literally could “leap tall buildings in a single bound.” He didn’t shoot webs, he had no iron rockets in his boots, he didn’t have an army of ants at his side, he held not a shield. Buster was armed with physical comedy, courage, and clever gags. His villains weren’t a thousand stories high, regurgitating volcanoes and spitting bridges, Buster’s bad guys were simply men; macho men, selfish men, greedy men. Today, a superhero has to save the world; and save it in a fancy costume. Buster just needed to get out of a tricky situation … while wearing a pork pie hat. He didn’t need the center of the earth to get sucked out by a giant earthworm in order to create a climax. No. He could drop his keys out of reach, get his pants stuck in the door, then wiggle to freedom and have you gripped in mighty suspense. Today, the common man cannot exist in our superhero movies. He’s usually the character that gets gobbled by a giant lobster. Buster boldly takes on everyday obstacles, which awakens our own courage to battle floorboards, flour sacks, salt and pepper shakers, rolling boulders. We all fall down and, just like Buster, we all get back up. Buster Keaton uses failure as a wand. He turns a mistake into laughter. Buster’s a hero, a magician, a real person. And, he’s all heart.

Buster Keaton’s storytelling through silence and physical comedy proved effective. He got super famous, super rich, and earned the freedom to make his own films without interference for 10 years after. He made 12 features in those 10 years. They were the best in his career. He wrote, directed, and performed. He conceived his own ideas. He knew his body, how it told a story, and what moves made it funny. He filmed without a script. He used to say all he needed was a beginning and an end – the middle would take care of itself. He was in control of his shots and he trusted the magic would happen as long as he could set up the pieces. But then Buster got sideswiped by sound. “Progress” came along and completely annihilated the silent world. He was ruined. Technology is merciless. It has no patience. Once sound was turned on, Buster would never complete what he started. How far could silent films have gone? Wasn’t there more territory to explore? There is so much to be found in the silence! For more than 90 years now, people have been yapping away in movies. Does anyone remember how fertile a quiet moment can be?

When sound took over cinema, Buster was forced to sign with MGM. He lost all his autonomy. The Hollywood machine wasn’t going to make movies his way anymore. Filmmaking was going corporate. Making a film would now require parts and processes listed by the factory. They wanted scripts. They wanted budgets. They were creating a formula for movie making. Buster was an artist. He couldn’t fit into the new mould , a mould that produced movies as if they were Ding-a-Lings on an assembly line: same ingredients, same size, same packaging. Seeing him forced into speaking roles, standing still, is a sad sight.

There are still artists trying to write, direct and star in their own movies. It is the only way for some artists to translate their ideas. Their own body is the vehicle for what they see. While they wait for money, these artists with their own unique visions audition for roles that will pay the bills, they write scripts for other people’s movies, they steam milk for coffee and squeeze juices from bruised fruit. They wait and wish for the impossible, sketching out their autonomous dreams.

While watching Peter Bogdanovich’s new documentary, The Great Buster: A Celebration I tried to imagine a new Buster gag. It was like trying to solve the Rubik’s Cube while a bee circled my head, as someone tickled my foot with a feather, and all the while the toast was burning in the toaster. It was invigorating to think of. Buster Keaton inspires us to take the joke as far as we can. The cyclone sequence in Steamboat Bill, Jr. is two-and-a-half minutes long. Just when you think the wind has blown long enough, a house crashes down on buster. He stands in its window frame. But it’s not over. He runs into another frame. His head juts forward into the wind like a bull pointing his horns at the matador. He flops around. A truck with a load of boxes rides by. The barrage of boxes bash into Buster. He flops around some more. (“Flopping” always with the grace and enthusiasm of a broken ballerina on a music box. ) Buster took his comedy skits to the limit every time. He informs the artist that once is not enough. He teaches us to go one more step, to round one more corner, to push the banana peel one more frame. Just like a trainer gets one more sprint out of you, so Buster gets one more joke out of us.

The Great Buster: A Celebration, and the Quad Cinema’s accompanying season Buster Restored, is exactly that. It’s a chance to revisit the master of silent film comedy and celebrate his genius. And maybe it’s a chance to excavate jokes hidden in the silent moments, to blow off the dust, to revive them, then to carry on where he left off.

Buster Keaton
film essay
Shannon Plumb
silent comedy
Mudhoney, Cruising on a Half-Pipe
The Strength to Tell My Own Story 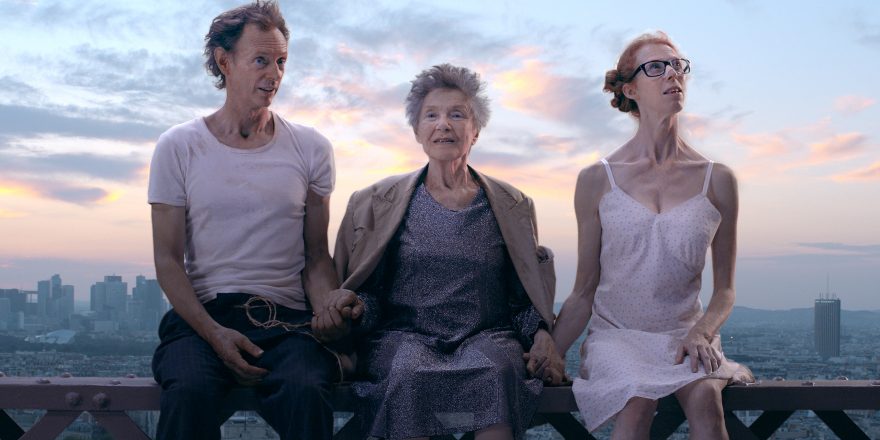 Physical Comedy is Thrillingly Alive in Lost in Paris

I’ve Been a Clown and I’m Terrified of Scary Movies, So Of Course I Saw It