At the end of 1998, I was running around Soho, Tribeca and the East Village with a video tape in my hand.

Four years earlier, I had come to the city by way of an old man in a sponge hat who I rode cross country with. “Bye Baby Girl,” that’s what he called me. He dropped me in Queens, at my boyfriend’s apartment, fresh off the road. I moved in with a duffel bag, some clothes and a few books on existentialism. I had no money and no sense of how to make money. Most days I was circling “Help Wanted” ads in the Village Voice, drinking deli coffee, writing on a word processor. My boyfriend, who was an artist, put on a suit to work a corporate job that paid our rent, his student loan, and the medical bills that saved his eye from sinking into its socket. (He had been badly beaten up in college.) There was no money left after that. I had to get my half of the rent somehow. (This would take years for me to do.) I had no experience in anything. Well, I had experience traveling with an old man who reached for my knee every 10 minutes. I got good at slapping his hand away. Was that worth something? I had gone to school for acting and writing, but what good was that?

I got a start in the city handing out flyers on the street corner for a couple dollars an hour. I worked in a restaurant and spilled French fries on someone’s head. I tried working as a model, but I hardly got paid. I bartended during the day. Not the greatest shift. Day drinkers aren’t the best tippers and tell the saddest stories. I gave out a lot of free drinks. I drove a delivery van and dropped off expensive lunches to fashion photographers.

Sometimes me and my boyfriend had three potatoes, sometimes we had four.

I had a hangover at least five times a week. I was depressed. The only thing that kept me alive was writing in my journal. Giving words to each day seemed to make the day worth living. But I had no direction. Nothing I was doing was giving me a reason. A reason not to go to the bar. Or not to do drugs. There was no reason for Me. There was no future. The only thing to do was to survive, but to survive for what?

My boyfriend had a studio where he made sculptures. I thought maybe I could find my destiny there, in the corner of his space. I roped up my perimeters with curtains. I sat with my journal. I stared at the wall. I waited for a revelation, or divine intervention; a voice to tell me what direction to go in. My friend suggested I get a Super 8 camera. They were only $25 at the flea market. I should try to shoot some of my ideas, he said. Maybe that was my medium. Film. I didn’t know anything about moviemaking. But I was desperate for a purpose in my life. I wanted to contribute to the world. Misery was having its way with my youth, and this was getting very dangerous. I needed a way to communicate my ideas. I needed the world to know I was here.

My friend brought me the Super 8 camera. A gift. One I’ll never forget. I borrowed a tripod. I put the camera on automatic record and tested it out. I shot myself licking envelopes. When I saw the film projected on a wall in its flickery, jerky, black-and-white movement, I was enamored by the picture. This was it! It made sense. I was a writer. I was a performer. I couldn’t afford sound, so the movies would be silent. The words would be spoken through pictures. There were so many possibilities. They all came to me as I watched the light flicker against a cracked wall in a Downtown kitchen.

I started transporting my ideas to the Brooklyn studio, to my space behind the curtain. I carried balloons to Brooklyn, pizza dough, wigs, new shoes and my camera. I set up the tripod, turned on a light bulb, and performed in front of my Super 8. Two-and-a-half minutes of purpose!

For a while, my audience consisted of a friend from France, a friend from Brittany, one from Switzerland, another from Denmark; and one American. I’d watch them shift forward on the couch, an alcoholic beverage in hand, while I threaded the Super 8 film into the projector. They waited quietly as I knelt on the floor trying to put the sprockets in the right place so the film didn’t get eaten up. The film was on track! I ran to turn out the lights. The frames rattled excitedly as they trucked toward the light and were projected onto a small square on the wall. I listened … I heard my friends laughing.

With a dozen more short films and a pocket full of confidence, I transferred the Super 8 pieces to video and carried a few of these 7 x 4 inch rectangles around town.

I brought my tape to the artist Francesco Clemente, I took the elevator to the floor of Miramax and left a tape for Harvey Weinstein, then I went to a large, mysterious brick building. I knew it was Anthology Film Archives because of the sign, but what that meant I had no idea. I watched as two older gentlemen paused at the door. One of them had on a brimmed hat. I asked them if they knew where I could drop off my video tape. I was hoping someone would look at it. And then, after someone looked at it, I didn’t know what was supposed to happen. I didn’t know what these films were going to do for me. Would they make money? Would they get me a part in a movie? The man with the brimmed hat said he would look at the video tape. I was a little nervous handing off my films to a stranger, but he had a warm smile and a mischief in his eyes that made me smile back. I thought I could trust him with the rectangular record of my work.

After that, I was empty-handed and had no expectations. I ventured into a bookstore just off St. Marks and looked through the new hardcover books. In one of the film books, I saw that man I’d just given my films to. Hat, brim and all! His name was Jonas Mekas.

Jonas called me a week later and said he wanted to give me a show. A show?! Really?! I couldn’t believe it. I was already preparing myself for rejection. I was sure people were stacking my video tape onto other video tapes and building walls out of unnecessary items. Nope. He was giving me my first show. I needed to make invites, posters, go to Kinko’s and print hundreds to hand out, thousands if I could afford to. I knew how to do it. I had experience handing out flyers. This was a cinch.

The night of my first screening, Jonas introduced my films to a full house. He said things about my work. No one who owned a theatre, or wrote articles, who knew Andy Warhol and Martin Scorsese, had ever said anything about my work. He made the films sound rebellious. He gave them words that put them on a pedestal. He supported the films with sentences of praise and admiration. He reveled in their existence. He applauded them. He gave the work legs to walk on. He gave my films a reason to be looked at, a reason to exist.

Was what I was doing worth doing? Jonas said it was. And I believed him.

I remember that night we went to a bar to celebrate. Jonas was full of life! What excitement to be in his presence. What celebration! We weren’t just celebrating the screening, this was celebrating being alive. Jonas was ready to dance. And sing. And he said so!

He held his drink up for a toast. Out of all the bodies sitting and leaning against that bar, Jonas’ was the one that possessed the most life. He was drinking it, breathing it, sweating it. He was a mythological creature with a funny accent that I couldn’t always understand. He was emanating energy like a great big giant sun and I watched in admiration as he shined.

After this screening, I was reborn. I saw some purpose to my life. Led my Jonas, I entered a world of hope, possibility and adventure. After that first show, I always went back to Anthology Film Archives to show new work. It was a community at Anthology. He had invited myself and many others to experiment, to grow, to learn and to laugh.

I’ll always remember that chance moment, when he stood at the door and I handed him my tape. That door was one I never knew existed. Experimental film, avant garde? Stan Brakhage and Ken Jacobs? I never knew the frame could be a space to scribble in; to doodle, to sketch. I never believed that I could make my own films with myself in them and that they could mean something to someone in the world. I understood that what I was making was not a way to get to something else but was actually the something else I had been looking for all along. This was my reason to celebrate. And my reason to live. And Jonas had validated that. You can make something out of nothing. You might think it’s just experimenting but the experiment leads to discovery and the discovery is worth living for.

My friend visited Jonas’ family this past week. He sent me a picture of a note Jonas left behind. It read: “Keep dancing, keep singing, have a good drink and do not get too serious! OK?”

“Keep going,” he told many filmmakers. 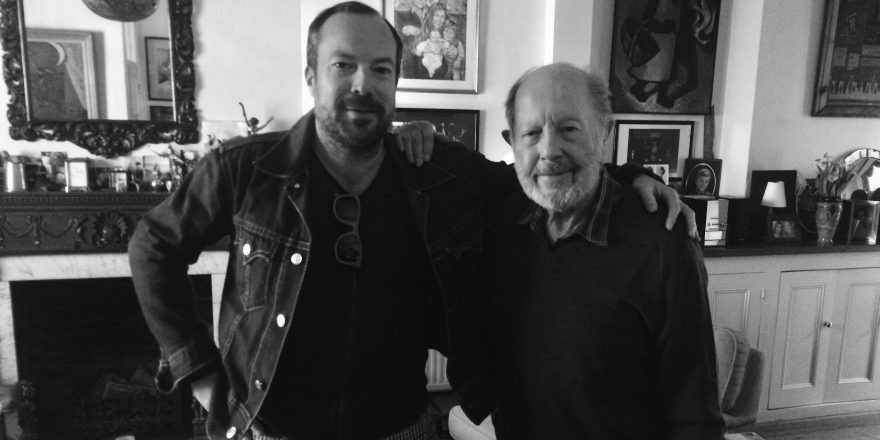 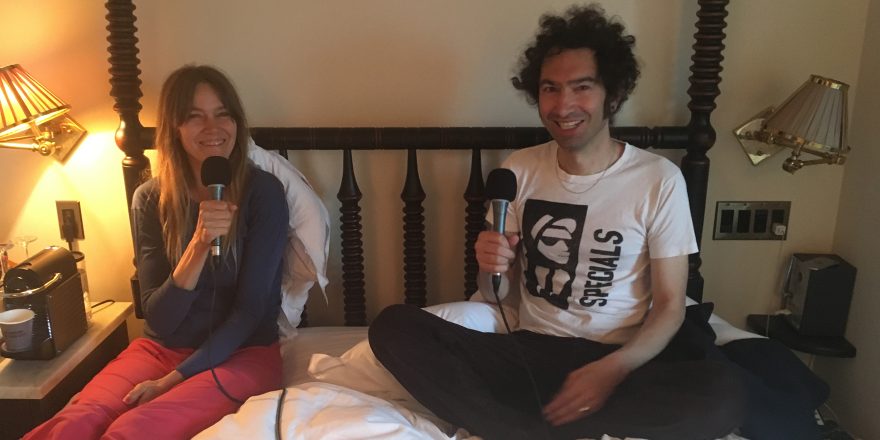 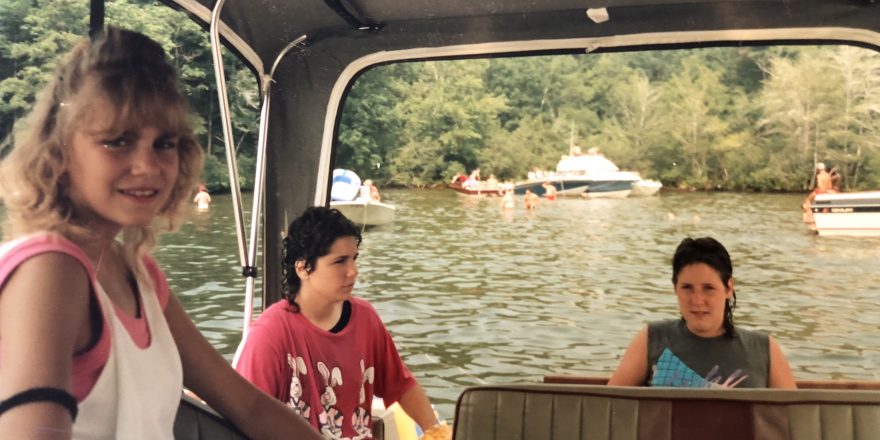