Ian Bonhôte is an award-winning director and producer. In 2004, he co-founded the production company Pulse Films with Thomas Benski and Marisa Clifford. Pulse Films co-produced the The Witch and American Honey (2016 Jury Prize Cannes Winner). In 2016, Bonhôte directed and executive produced his first feature film, Alleycats. Bonhôte’s second feature film, McQueen, a documentary about the late fashion designer Alexander McQueen, is released by Bleecker Street in select theaters on July 20.

During my career as a filmmaker and a creative, I have witnessed so many passionate, talented filmmakers struggle to make ends meet or just give up on their careers entirely. This makes me really upset and I’ve spent a lot of time thinking about a solution to this problem. Even now, there is not a single waking day when I do not think about how unsustainable it is to have a career in film.

I was introduced to filmmaking when I was a child actor and at that time became obsessed with how you could move audiences through storytelling. I had big dreams, and the question at the time was how to make them reality.

I later realized that I was more interested in mastering the art and craft of the camera. I became obsessed with the stylization of image-making, of creating true art by using light, acting and movement. During this time, I experimented with the craft of filmmaking by shooting countless music videos and commercials.

Over the years, I’ve founded two production companies. The first one, Pulse Films (which is now part of the Vice Media Group), I left in 2016 after an amazing 12 years. I had grown as a filmmaker within the company and decided to take an opportunity to start anew, which is how Misfits Entertainment was born. I joined forces with trans producer Dee Ryder to build a place where we could make our own rules. We are passionate (obsessed, even) about creating quality content for the international market. Our work spans across feature films, TV, documentary and more, and in the past two years we have produced three feature films: the fast-paced thriller Alleycats, the epic fantasy Of Gods and Warriors and the fashion documentary McQueen.

Through those experiences, which were dictated by my need to control my own destiny and career, it became apparent that I needed to learn how the film industry works. I realized the extreme importance of understanding how films are financed, sold and ultimately brought to audiences to consume. I emphasized the word “industry” because it is relevant to the rest of my thinking process. If you choose a career in film, it will be a mixture of art, craft and industry. To succeed as a filmmaker, it is essential to have an equal understanding of all of these areas.

Sometimes I feel that filmmakers have more in common with entrepreneurs than artists. Or that perhaps filmmakers must combine the best qualities of businesspeople and artists to succeed. Because of this, I have tried to analyze entrepreneurial thinking and apply it to my own work.

This all brings me back to the subject I feel a lot of directors and producers do not talk about enough, perhaps because it lacks the glamour of talking about our influences and how amazing filmmaking is: sustainability.

According to Stephen Follows’ website, which looks at the film industry from a data and statistics perspective, less than three percent of the U.K. directors who have directed a feature have gone on to direct two more.

To me, the sheer superhuman effort required to make a first feature is so immense that all energy and passion from the director is left behind. Filmmaking is a marathon, not a sprint. It is about pacing yourself to be able to go the distance. A lot of first-time filmmakers think that getting their project made is such an achievement that they then completely underestimate the importance of selling or finding an audience for it.

In my opinion, the life of a film has six phases:
1. Conception
2. Financing
3. Production
4. Post-production
5. Distribution
6. Finding an audience

You need to respect and work on all of these elements equally if you want to create a unique and successful work that gives a full experience to an audience. There are so many different factors that affect why a film does not break out or make a return on its investments. At Misfits, we take great pride in maintaining the respect of our investors. You will only get your next film made if the previous one brings a return to its investors.

Through my filmmaking experiences, it became more and more apparent to me that I needed to be increasingly involved in the filmmaking process as a producer. You need to be (or learn to be) business-minded if you want to find your way through this meandrous industry.

This thinking process became even more clear to me 18 months ago when I embarked on my latest film, McQueen, a documentary about the late fashion designer Lee Alexander McQueen.

While at Pulse Films, we produced countless short documentaries, but I never found the right subject matter for a feature doc; a character with enough gravitas and a singular story for me to tell. With McQueen, all of those elements were there.

It was my first feature-length documentary, however I set out to make a film that was creative rather than followed a typical non-fiction format. It is an emotionally immersive journey for the audience; emotion is always more important than information.

We started the film with no access and no archival material, just a very good script written by Peter Ettedgui, McQueen‘s co-director. The following 14 months were a monstrous amount of work: raising the finance, going through over 150 archival sources to gather all the necessary footage, convincing people to talk to us on camera, and all of this under a very tight time deadline. We had to lock pictures within eight or nine months of starting production.

But all that work resulted in a film we are extremely proud of.

One element we did not cover so much in the film is Lee Alexander McQueen’s amazing sense of business. He came from nothing, and had no formal education, yet the business decisions he made throughout his career that led him to create an extremely successful company – and a brand that never went bankrupt.

When he embarked on his career after graduating from Central Saint Martins College of Art and Design, McQueen only produced clothes for his shows. They were made out of cheap fabrics, plastic and decorated with spray paint. … By being different, he built himself a reputation. Not only that, working in such a unique way also gave him freedom to create. Meaning, he never relied upon financial investment to conceive a collection and then sell it. He was broke, yes, but never financially dependent.

When he accepted the role of Creative Director at Givenchy, aged just 26, he invested his salary into his own McQueen brand back in London. For four years, he used his own money to build his business and his brand. By that time, he was selling his own designs. In 2001, he was the talk of the town and sold half of his business to the Gucci Group, which then underwrote the Alexander McQueen brand, making it a huge success.

Lee McQueen is one of the most famous fashion designers of all time, but what I found most fascinating and inspiring is how through instincts and sheer vision, he managed to build a hugely successful fashion empire. This stayed with me throughout the filmmaking process, and made me excited about to build Misfit Entertainment with a similar passion, never losing our creative edge but also always staying in close touch with the business side of the industry.

Ian Bonhôte is an award-winning director and producer. In 2004, he co-founded the production company Pulse Films with Thomas Benski and Marisa Clifford. Pulse Films co-produced the The Witch and American Honey (2016 Jury Prize Cannes Winner). In 2016, Bonhôte directed and executive produced his first feature film, Alleycats. Bonhôte’s second feature film, McQueen, a documentary about the late fashion designer Alexander McQueen, is released by Bleecker Street in select theaters on July 20. 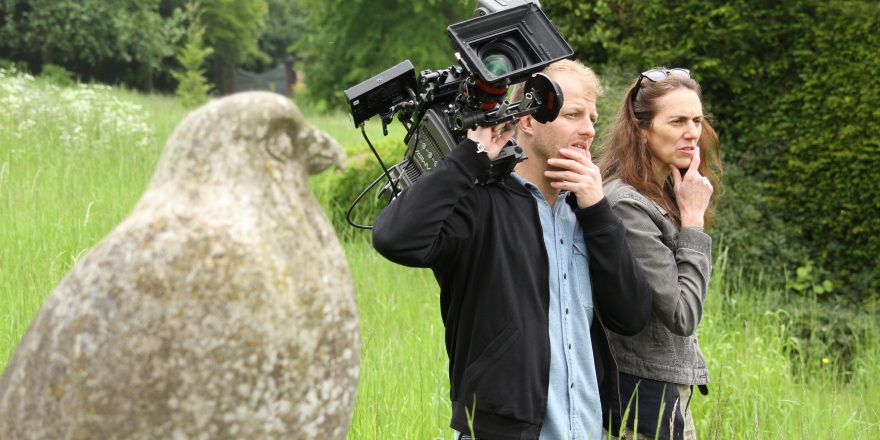