Lorna Tucker cut her teeth working behind the camera and jumping on tour buses with rock bands such as Unkle, Lupe Fiasco, The Cult and Queens of The Stone Age creating tour videos and music promos. She then moved into longer format storytelling, directing documentaries, writing scripts and creating more experimental video art projects for the likes of Alexander McQueen, Vivienne Westwood and Nike. Her first feature documentary, Westwood – Punk Icon Activist, premiered at the Sundance Film Festival in January and is being released by Greenwich Entertainment on June 8. This year will also see the release of Amá, a feature documentary about the sterilization abuses of Native American women across the United States during the last 60 years, which because of its socially sensitive nature has taken a decade to bring to fruition. Tucker was recently hailed by Harper’s Bazaar as one of the top five breakout female filmmakers of 2018.

It’s been a long journey to get where I am today, and I’ve made a mountain of mistakes.

I’ve lived through real darkness in my life, and am lucky that I had the most profound and magical experiences to help balance that out. Each time I was down to my last pound and didn’t know how I would be able to feed my kids, something always came up – usually at the very last minute! I have now learned to trust in life a bit more. I work hard and always keep a look out for a good story or the opportunity to work with someone I admire, and grab them as soon as they come my way.

I lived through 30 years of absolute financial struggle, from my childhood growing up in a large, loving low-income family to becoming a single mother living in hostels and surviving (just about) on government benefits. I was lucky enough to find myself through art, by staying true to myself and by continuing to put one foot in front of the other until eventually I made it through the rough times. I’m certainly not wealthy, but I am lucky enough to provide for my family, be my own boss and produce work that lifts my heart, so I consider myself a winner!

When I was 15 years old, I ran away from home and ended up on the streets. I was lost and broken. I had a drug problem and didn’t know how to move forward in the right direction. When I finally managed to get myself off the streets and away from the darkness that was keeping me there, my family rallied around to help me get back on my feet. I tried hard to fit back into society, but my life didn’t instantly turn around; it was very challenging. I relapsed again and again and suffered from deep depression. I created a whole trail of destruction in my wake. I couldn’t hold down a job or a relationship, and my friendships were strained by my continual drug relapses. Eventually everyone stepped away and I was left to pick up the pieces by myself.

That was when I realized things had to change. I managed to take on and keep a few odd jobs, and started to think about what kind of future I wanted for myself. At the time, I didn’t believe that I could or would be able to succeed at anything, but then one day I was scouted by a modeling agency. It totally changed my life. I wasn’t very good at modeling, but I made enough money to support myself and go back to college to study art. Shortly after completing my diploma, I discovered I was pregnant; it was a scary time for me. I went on to have a beautiful baby girl. When her father left shortly afterward, I was suddenly alone in the jungle of single parenthood.

It was tough being poor, trying to provide for my child and keep a roof over our heads, but slowly I started to work out what I wanted to do with my life. I knew I wanted to tell stories, and that I wanted to travel and see the world. What I didn’t learn at school, I learned through my life experiences. Photography had been a part of my art course I’d really enjoyed, so I started working on photography projects. I was lucky enough to start by photographing some bands I knew from my modeling days, which then progressed to filming tour videos and music promos. It was challenging trying to work with a young child, but I stuck at it and started to figure out the subjects that interested me, that I felt I could relate to. As a result of everything I had been through and the people from all walks of life that I had met and spent time with, I felt I could connect to pretty much anyone and any situation. This was when I first realized that I wanted to tell stories and take the audience on intimate journeys, to learn something about life, through the lives of others. I have met some incredibly supportive friends in both the music and film industry who, along with a few guardian angels who came into my life, believed in me and helped support me through those early years.

I wanted to find the perfect human story for my first full-length documentary, and some time during my early days of filmmaking, a friend of mine told me about an incredible Comanche woman called Charon Asetoyer, who runs a women’s center on the Yankton Sioux reservation. As a member of WARN (Women of All Red Nations), Charon had taken to the Senate the reports of sterilizations carried out on Native women without their knowledge or consent during the ’70s, ’80s and ’90s. I decided to meet with Charon, as I was moved by this story and wanted to know more. We became friends and Charon has been a huge inspiration to me ever since. With her help and guidance, I started filming my first feature documentary, Amá (Navajo for mother), which is a journey to discover and expose the stories of abuses suffered by Native women and the subsequent pain and heartache they experienced, which has affected their entire lives as well as those of their families. I was shocked that the Amnesty International reports on sexual violence perpetrated toward Native women, which I learned about through Charon and the other amazing women whose lives are featured in the film, weren’t being discussed on a global platform. Together we worked on telling their stories and explaining what has been happening to generations of Native women and the ongoing effect on their communities. We follow them on their journey of pain and heartache to a place of healing. After 10 years, we’ve now completed the final edit of the film, so hopefully we can release it later this year; the best part is that Charon and the other women will lead an outreach and educational campaign, using Amá as a tool. We will be asking people who are moved by the story to sign a petition in the hope that the women will at last receive an apology from the U.S. government.

At some point while I was working in bars, shooting bands and flying to the U.S. to film Amá, I met Vivienne Westwood. She had recorded a rap song about the environment and wanted to collaborate with a few musicians that I knew. Luckily for me, they invited me down to film the recording session. I was blown away by her passion, style, determination and her defiance against conformity even in her later years! She set a spark alight in me and I began to question everything in my life. I was fascinated by her knowledge of art and how she had referenced it in her work. I started going to art galleries and reading history books, trying to educate myself about the world.

Over the next few years, Vivienne and I kept in touch and collaborated on a few projects. The more I learned about her life – where she had come from and how she had managed to achieve great success from humble beginnings – the more I became obsessed with making a film about her. Convincing her that I should be the one to make that film was harder, though. Eventually she agreed, however, and I began filming her every waking moment!

As a result, the past four years making Westwood: Punk, Icon, Activist have been a crazy roller coaster ride. As an artist and filmmaker, I wanted to make a true portrait of one of the strongest women I’ve met, as well as one of the most iconic fashion designers of our time. She inspired me, amused me and made me feel that we can all do anything we want if we work hard to become good enough and never give up. It’s interesting to witness the contradictory nature of fashion and how Vivienne deals with the industry as she attempts to make her brand more sustainable and environmentally conscious. The film also follows her life story from the early punk days with Malcolm McLaren to the hugely powerful and successful woman she is now.

At times, making Westwood felt like an uphill struggle. I was a young female filmmaker with no film-school training and no money, so I wasn’t exactly a great proposition for financiers. I also had two more children whilst making Westwood, the youngest being born right in the middle of the whole process. I took her everywhere, strapped to me, and just carried on filming. Eventually, with the support of some of the best individuals I’ve met in the film industry, I finally got Westwood over the finish line.

Westwood is being released in the U.S. this week, and I hope American audiences will be as inspired by Vivienne as I was during the making of the film. I’m also very excited because just a few weeks ago I signed my first option agreement for a feature script based on my experiences as a teenager. I hope the film will inspire young people who feel hopeless. Life isn’t a fairy tale, and it can be very challenging at times, so I always try to use my experiences as a way to reach out to the next generation. If what I went through can help just one person, then it’s worth it.

Lorna Tucker cut her teeth working behind the camera and jumping on tour buses with rock bands such as Unkle, Lupe Fiasco, The Cult and Queens of The Stone Age creating tour videos and music promos. She then moved into longer format storytelling, directing documentaries, writing scripts and creating more experimental video art projects for the likes of Alexander McQueen, Vivienne Westwood and Nike. Her first feature documentary, Westwood – Punk Icon Activist, premiered at the Sundance Film Festival in January and is being released by Greenwich Entertainment on June 8. This year will also see the release of Amá, a feature documentary about the sterilization abuses of Native American women across the United States during the last 60 years, which because of its socially sensitive nature has taken a decade to bring to fruition. Tucker was recently hailed by Harper’s Bazaar as one of the top five breakout female filmmakers of 2018. 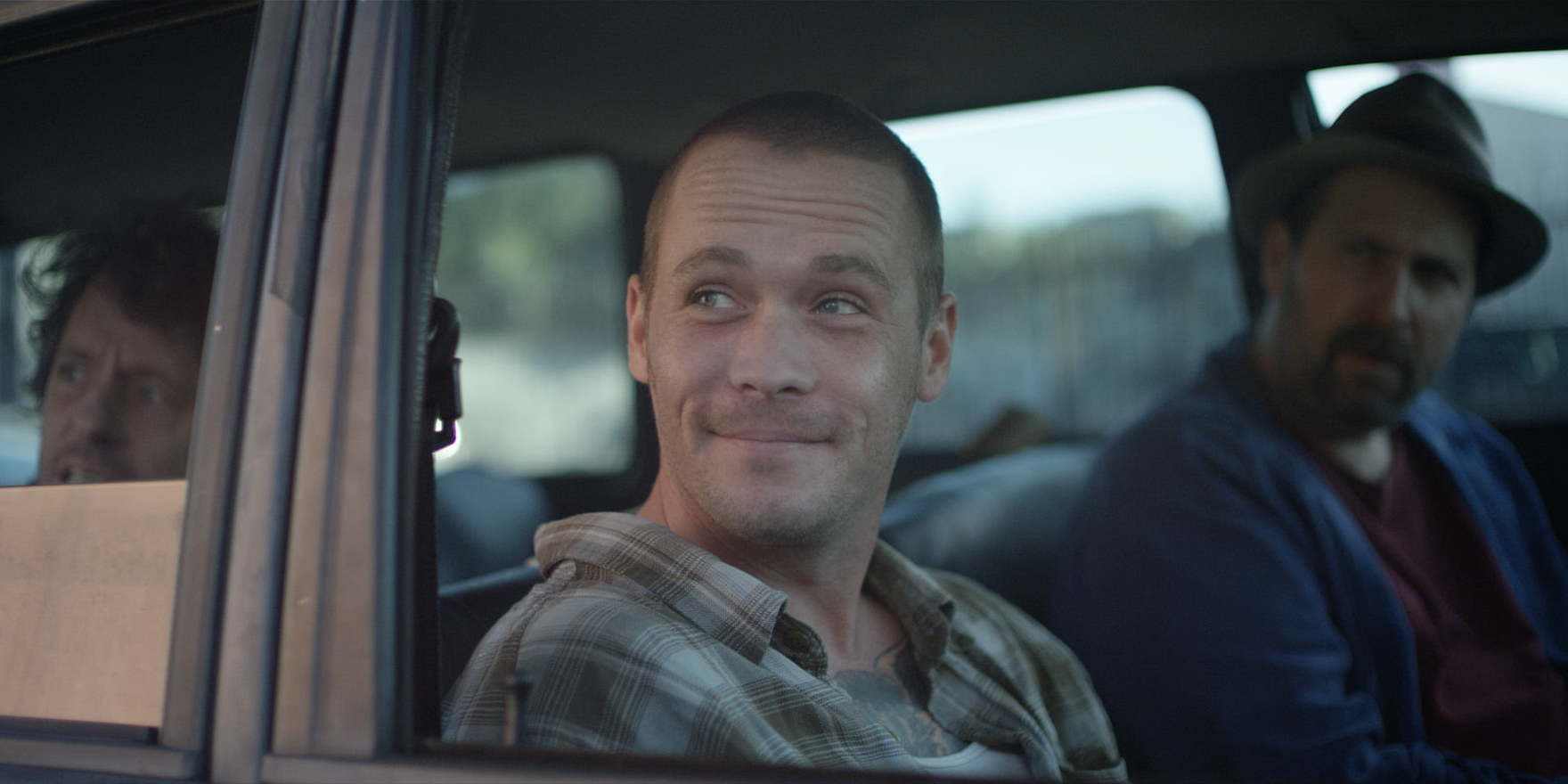 Remembering Blake Heron: Beautiful and Angry and Sad and Funny and Wild