Iuli Gerbase, a Brazilian filmmaker, studied Cinema and Creative Writing. At 20 years old, she started making films and developed a taste for writing strong dialogues and exploring inner conflicts. She has written and directed six short films, selected for festivals around the world like TIFF and Havana Film Fest. Her first feature film, The Pink Cloud, a drama with touches of surrealism and scifi, premiered at Sundance in 2021 and is out now in theaters through Blue Fox Entertainment. For her next projects, Iuli is developing her second feature, another sci-fi drama, and a TV series. (Photo by Louise Carpenedo.)

I called Renata de Lélis, the amazing lead actress in The Pink Cloud, to ask if I could tell this story. She replied, “Nobody wants crazy actors, but people get the best stories from them.” I laughed and said, “We just had one crazy day.” It was the day when Baby Marques, our great makeup artist, had to save me …

From the beginning, the actors and I knew we had challenging scenes to shoot for The Pink Cloud. Renata and Eduardo Mendonça, her co-star, had to fight, be intimate, act with a toddler, and even do a home birth scene. So I was not worried at all about the film’s roleplaying scene.

The premise of the film is as follows: after what should have been a simple one-night stand, Giovana (played by Renata) and Yago (played by Eduardo) are suddenly trapped in an apartment due to a toxic and deadly pink cloud that appears out of nowhere. As they are forced to wait together for the cloud to disappear, without even opening the windows, years go by …

We didn’t shoot The Pink Cloud chronologically, but we shot the big sequences in order. We began with the first weeks of confinement, then one year into their lockdown, then three years in … And when some random factors collided, the crazy day happened.

The role-playing scene takes place when, after five years of confinement, Giovana and Yago are having dinner, and Giovana can’t stand to live with and look at him 24/7. She says in the scene, “I know all the spots on your back. There are seven. I know all the strands of white hair on your head. That’s not normal. No relationship is like this. I can’t stand it.” We cut abruptly to them at the same table, with the same lighting, but looking different. Yago now has a weird bad-boy vibe and gel in his hair and Giovana has a blonde wig with fringes and a tight purple dress. The roleplaying has begun, and trying it out now is a necessity for Giovana.

We first shot the part of the scene where Giovana says she’s had enough. The actors then went to their dressing room to get transformed by Mariane Collovini, our costume designer, and Baby Marques, our makeup artist. Both are very talented and smart women who have a calm vibe that makes the dressing room a relaxed space for the actors.

After what seemed to be a longer time than necessary, the actors, Baby and Mari came back to the set. Baby gave me a warning look and said, “She didn’t love the wig.” Renata came to me and said, “Well, I’m Cuca!” Cuca is a character from Brazilian folklore, a scary witch with an alligator head and long nails. And this is how Cuca appears on a popular Brazilian TV show for kids:

Not ideal to feel like Cuca if you’re trying to do a sexy roleplaying scene, right? But it was the wig that we had for that day, so we just had to make do with it. We had already tried the wig during pre-production, and it was not supposed to look natural. Actually, we felt the greater the contrast between Giovana and Cuca – sorry, Giovana and Sabrina, her role-playing alter ego – the better.

While they were getting their makeovers in the dressing room, Renata and Eduardo discussed the extreme things couples sometimes end up doing after many years together. In the case of their characters, it was just five years – but five years without seeing anyone else in person, without ever having the house to oneself, without even opening the windows to get some fresh air.

So they came back … acting kind of crazy. It was the Cuca wig, their chat about long-term monogamy and sexuality, and the fact that I said they were now in the fifth year of the pink cloud being there … “But Iuli, after five years, they would become savages, destroying the apartment, acting like animals! Five years! Five years is a lot!” Their energy was much more agitated than normal. I said that this excessive reaction was certainly a possibility after five years, but that I thought Giovana and Yago were still trying to adapt, trying to strengthen their relationship by exploring this new activity … without destroying the apartment. At least, not yet!

We started shooting. In the script, Giovana and Yago’s conversation goes to some weird, dark places for their roleplay, and then they kiss. On the first take, they delivered the dialogue very well, but the kiss was so bizarre that it was almost comical. No problem, it was just a matter of toning it down! So I approached Renata and Eduardo to discuss some adjustments for the next take. As it turns out, Renata was no longer there – it was Cuca’s day. I could not get a word in. Cuca talked quickly in a very agitated way, refusing to change anything or tone it down. “But FIVE YEARS is a LOT!” This was our tenth day of shooting and communication had been great until that point.

After more takes and more weird kisses, I checked with the A.D,, the D.P. and the production designer (none of whom are prudes about kissing scenes), asking: “Am I crazy? Is this kiss actually sexy?” They all said, “No, the kissing is too much, it’s becoming funny and weird.” Of course the camera has the power to amplify everything, or hide things when desired. But we just knew that in that frame, in that scene, the crazy kissing wasn’t working.

Somehow, there were still more weird kisses. And there was more of Cuca exploding when I tried to intervene. I let it happen for a few more takes. And then I asked – almost begged – the actors to just trust me on this one, and that we needed a more restrained version of the kiss. They did it. Maybe they were getting tired from the takes. That kiss is the one that we used in the film. And thank God that was the last scene of the day, because how could I keep directing Cuca and Cuco?

Arriving home, I called my A.D. and said that working with Renata was a blessing, but if Cuca was planning to stay with us until the end of the shoot, we would need a new strategy … and I had no idea what that should be. She told me to call Renata. I called her. She was at home, no longer wearing the wig, but still with the Cuca energy. We chatted civilly for a bit and I tried to explore how to communicate with Cuca, but I still didn’t know exactly how to get things back to normal.

The next day of the shoot began. What to do, what to do? Baby! Baby was the one to rescue me. She had asked me to lend her my yoga mat so she could do some poses or breath work between scenes when she felt like it. (Her own mat was in another city.) We had worked together before and it was always great, however she almost didn’t accept this job because she’d had some stressful experiences on other shoots. Bernardo Zortea, our production designer, had convinced her to take the job by saying that the crew was nice, the film was almost totally shot in one apartment, and it would be an exciting but serene experience. So, besides makeup, tools and wigs, Baby had all her “peace guns” in the dressing room: yoga mat, incense, zen soundtrack on her phone, nice smells, thermal water and good vibes. Mariane, the costume designer, was also delightful, calm company.

At breakfast, I approached Baby and asked, “Could you maybe help me with Renata today? She was agitated last night, and I would love for her to be in balance again.” Baby said she had an idea for what to do. We ate our breakfasts and I went to check the call sheet with the A.D. and the lighting with the D.P. Sometime after, I went to check how things were going with the actors in the dressing room. I opened the door and immediately heard the sound of a harp. It was from a zen soundtrack emanating from Baby’s phone. The incense next to the mirror was forming a softer, calmer cloud than the pink one in the film. It smelled good. Renata was in the makeup chair, receiving reiki from Baby. Her eyes were closed, and she was as relaxed as a person can be. Aside from the sound of harps, the room was in total silence. Neither Renata or Baby looked at me when I opened the door. They were both in deep concentration. I felt like I was invading a sacred space. I closed the door gently and thought, “I love Baby.” 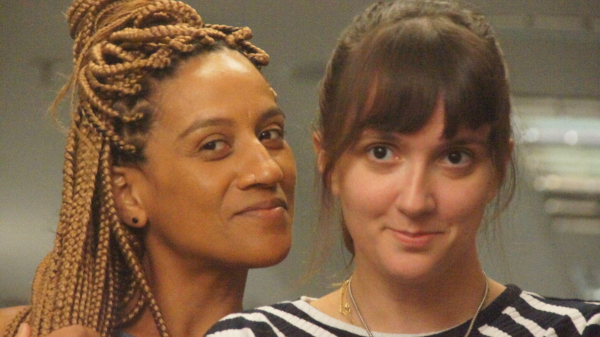 When Renata came to the set for the first scene of the day, Cuca was gone. Baby had sent her away. Renata’s conclusion after some rumination about the matter: “It was the wig.”

Now when Renata and I text, the Cuca sticker is one of our favorites.

Iuli Gerbase, a Brazilian filmmaker, studied Cinema and Creative Writing. At 20 years old, she started making films and developed a taste for writing strong dialogues and exploring inner conflicts. She has written and directed six short films, selected for festivals around the world like TIFF and Havana Film Fest. Her first feature film, The Pink Cloud, a drama with touches of surrealism and scifi, premiered at Sundance in 2021 and is out now in theaters through Blue Fox Entertainment. For her next projects, Iuli is developing her second feature, another sci-fi drama, and a TV series. (Photo by Louise Carpenedo.) 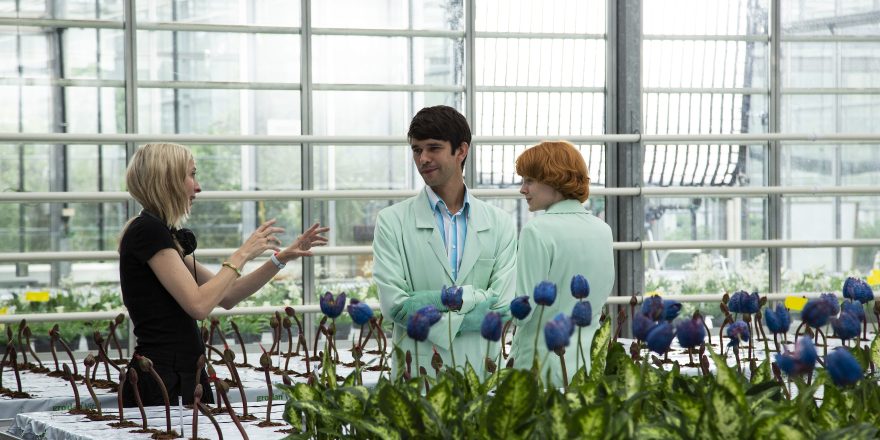 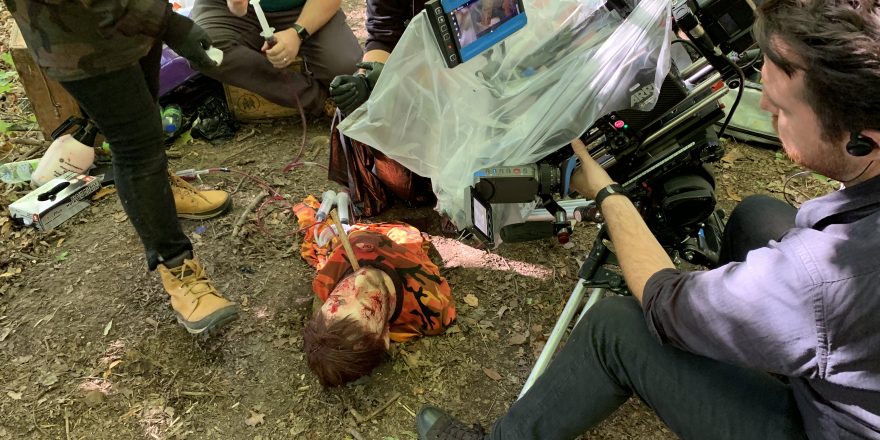 Finding the Details and Choosing Your Battles