Deborah Kampmeier is an award-winning filmmaker. Her first feature Virgin, starring Elisabeth Moss and Robin Wright, was nominated for two 2004 Independent Spirit Awards, including Best Actress for Elisabeth Moss and the John Cassavetes Award. Her second feature, Hounddog, starring Dakota Fanning and Robin Wright, was nominated for the Grand Jury Prize at the 2007 Sundance Film Festival. Deborah’s third feature, Split, won Best of Show at the 2016 Female Eye Film Festival and was nominated for the Independent Vision Best Film at the 2016 Sarasota Film Festival. Kampmeier made her television directorial debut on Ava DuVernay’s critically acclaimed series Queen Sugar in 2019 and followed immediately with two episodes of DuVernay’s new series Cherish the Day. Her fourth feature, TAPE, starring Isabelle Fuhrman is having its online virtual release March 26, 2020, and will be available on Amazon and iTunes April 10th. Deborah is prepping her next feature, Dirt Rhapsody, as well as her limited series Pilgrim’s Wilderness.

After completing my third feature film, I realized I had created my own personal trilogy (Virgin, Hounddog and Split), in which I was excavating, healing and trying my best to make art out of my history of sexual trauma. I thought I was done making films about sexual violence against women. But, as it turns out, I was not done.

In 2016, Annarosa Mudd joined me as a producing partner at my production company, Full Moon Films. We were preparing for the premiere of Split, and at the same time had each begun writing screenplays to put into development at the company. As we worked together, Annarosa continuously struggled to write. The teacher in me rose to the occasion and I pushed to uncover Annarosa’s block. After a timed writing exercise I gave Annarosa, she revealed her fear that if her career were to launch into the public eye, an explicit video tape of her might surface. I asked her to tell me more. As Annarosa’s story poured out of her, she revealed a haunting tale that hovered in the gray area of sexual abuse. Her story resonated deeply with me, as I had also begun my career as an actress, and I realized her experience, as well as many of my own, demanded a broadening of the definition of abuse to include coercion.

This was prior to the #MeToo and #TimesUp movements and so there was no hashtag and no community which Annarosa’s story could be attached to. I felt fiercely protective of Annarosa’s psyche, suggesting she speak with a therapist, and then asked if, after doing so, she would consider letting me turn her experiences into a film. I had never before made a film that wasn’t rooted in my personal history, but I was deeply compelled to make this one, as it held so many elements that were familiar to not only my own stories, but the stories of so many women I knew.

Annarosa did find a therapist and together they dug deep. After three months, she came back to me and said I could make the film. Together, we decided this would be our way to take back Annarosa’s story – and her power – from her perpetrator, and turn this film into a revelation of her own experience and truth.

I spent a day interviewing Annarosa as she shared with me all of the details of her story, including the eight hours she spent in a room with the “producer,” participating in a screen test that went too far. I ended up channeling Annarosa’s experience into the character and narrative arc of Pearl, a role that reflected, word by word and step by step, exactly the experience Annarosa had endured, and that is actualized in TAPE in a stunning performance by Isabelle Fuhrman.

Annarosa also gave me more than two dozen emails that were written between her and her perpetrator, who I named Lux, and is played brilliantly in the film by Tarek Bishara. Included in the email exchanges was an audition script, an Oil of Olay infomercial, and other dialogue and instructions, all of which I incorporated into the film.

At the end of that interview day, I asked Annarosa what she hoped would happen to the producer. “I want him publicly humiliated and I want him to suffer,” she said. I was struck by the fury in Annarosa’s revenge fantasy and decided to write this emotion into the character of Rosa, who Annarosa could play, as she was still pursuing a career as an actress. I saw this as a path of reclamation, of taking her shit and turning it into gold, which is what I think that we as artists, if we are lucky, sometimes get to do. And I believe she did just that, in the creation of TAPE, in her courageous decision to come out that this is her story, and in her heartrending performance as Rosa.

Just as we were wrapping up the interview, Annarosa, as an afterthought, said, “Oh, and can you also put a little nod in there to Lavinia, from Titus Andronicus?” Her suggestion was an inspired one. Shakespeare’s Lavinia is brutally raped in the play, and then has her tongue cut out, so she cannot speak of her rape, and her hands cut off, so she can’t write of it either. After Annarosa’s comment, Lavinia became a central symbol for me, a metaphor in the film for the silencing of a woman’s voice after an act of violence or coercion. This story has been going on forever, since the beginning of patriarchy, and it felt important to reflect the sad fact that this is not a new story.

In my own experience, I know that oftentimes the silencing can be as damaging as the act itself. I made three films to try and sew my tongue and hands back on and tell my truth. And I have learned by doing so that reclaiming and sharing our own story is a brave, political and healing act. It explodes the patriarchal gaze and formula, it catalyzes change, and creates space to amplify more of our stories.

I wanted to do that for Annarosa. I felt so strongly about sharing her story that I wrote around the clock, finishing the script in five days. I sent it to Annarosa. She sat down on a park bench in Brooklyn and read it. Twice. Maybe the most fulfilling moment in this process for me was when Annarosa called me and told me she felt electrified, like the screenplay was changing her on a chemical level. That she suddenly could move differently through the world. Like she was previously a blur and now she appeared boldly and clearly, and saw herself that way too.

In the process of trying to meet the male gaze, we perform our lives instead of experiencing them. The male gaze trains women to turn away from their instincts and intuition, cutting off parts of themselves – their hands and their tongues, their rage, grief, pain, sexuality, their truth.

I’m enraged. Still. That women are systematically abused, silenced and manipulated. That the best of who we are – our passion and desire and ambition and hope and love and dreams – is weaponized against us.

TAPE and Full Moon Films’ four upcoming projects are no longer my personal stories, but rather stories based on my friends’ experiences. And they all deal with the topic of sexual violence, which I have a feeling I will continue to deal with in my work until we have dismantled rape culture.

We are presenting a virtual premiere with online screenings, Q&As and community conversations. You’ll be able to purchase a viewing of the film through our site at this link. After the March 26 virtual premiere screening, TAPE will run for two weeks on this platform, from March 27 to April 9. All of the post-screening conversations are free of charge. Tune in every night at 8.45 p.m. EST to join in the conversation here.

Deborah Kampmeier is an award-winning filmmaker. Her first feature Virgin, starring Elisabeth Moss and Robin Wright, was nominated for two 2004 Independent Spirit Awards, including Best Actress for Elisabeth Moss and the John Cassavetes Award. Her second feature, Hounddog, starring Dakota Fanning and Robin Wright, was nominated for the Grand Jury Prize at the 2007 Sundance Film Festival. Deborah’s third feature, Split, won Best of Show at the 2016 Female Eye Film Festival and was nominated for the Independent Vision Best Film at the 2016 Sarasota Film Festival. Kampmeier made her television directorial debut on Ava DuVernay’s critically acclaimed series Queen Sugar in 2019 and followed immediately with two episodes of DuVernay’s new series Cherish the Day. Her fourth feature, TAPE, starring Isabelle Fuhrman is having its online virtual release March 26, 2020, and will be available on Amazon and iTunes April 10th. Deborah is prepping her next feature, Dirt Rhapsody, as well as her limited series Pilgrim’s Wilderness.

#MeToo
Annarosa Mudd
Deborah Kampmeier
film essay
Tape
TimesUp
Argentina’s Day of Remembrance Recalls a Ghastly Past
The Way We Get By: Control Top Has Been Watching Dystopian Movies

“A Warrior Genius with a Child’s Brain in a Sex Goddess Body?” 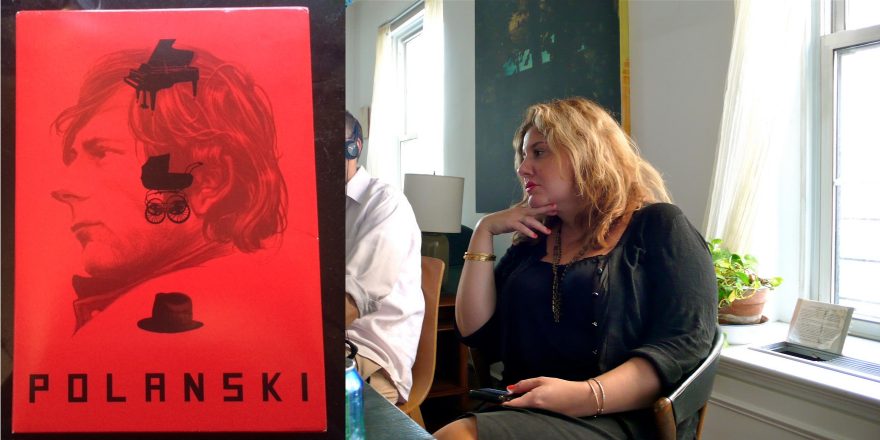 Loving Movies in the Age of #MeToo