Christina Kallas is the New York-based writer-director of critically acclaimed ensemble dramas The Rainbow Experiment and 42 Seconds of Happiness and the writer of the John Hurt-starring, Golden Berlin Bear-nominated political thriller The Commissioner. Her prior credits include BBC Films’ hooligan drama, I.D., Toronto and Berlin selection hybrid narrative-doc Mothers, and European TV series hits, Edel & Starck and Danni Lowinski. Kallas is also known as author of books such as Creative Screenwriting: Understanding Emotional Structure and Inside the Writers’ Room. She was the President of the FSE, the European equivalent of the Writers Guild of America, for eight years and is a member of the European Film Academy, the German Film Academy and of the New York chapter of Film Fatales.

Alex and I go way back. For one thing, we both come from the Balkans. He’s Romanian (his mother belongs to the large German community in Romania) and I’m Greek — but we are also both German, as we spent a large and defining part of our lives in Berlin. In fact, we met in Berlin, when he was a student in my very first class as a young professor at the German Film and Television Academy. He then went back to Bucharest and I relocated to New York, but we somehow managed to stay in touch.

During the pandemic, when geographical proximity became suddenly insignificant, we started meeting in that nondescript space which connects different time zones and circumstances. We talked about process, watched each other’s work, I shared my cut of Paris is in Harlem, the film I’m currently editing, and we even started discussing stories that we could approach together from our respective worlds of fiction and non-fiction.

An invitation to share one of our conversations came when Alex was thrust into the Academy Awards discussion, as his film Collective is nominated for both International Feature Film and Best Documentary Feature. (At the time of our conversation, the film was only shortlisted in those two categories.) On a Sunday night, seven hours apart, we started talking about our past together, our similarities and differences, both personal and cinematic, and the human experience of making the films we make.

Kallas: Alex, I think you were in my first class ever, in Berlin. That’s so many years ago now. Do you remember what class it was?

Nanau: We were writing stories and scenes using different creative approaches like changing the gender, the age or background of the characters, or the narrative perspective …

Nanau: The class was a breakthrough for me. Something started to work for my writing there. I always regretted that I did not continue writing.

Kallas: Because you started making documentaries in Romania.

Nanau: Actually, I did my first feature-length documentary in film school in Berlin. We were not allowed to make anything feature-length in our first two years, so I had to keep it a secret and edit during the night for almost six months.

Kallas: That was Peter Zadek inszeniert Peer Gynt, and it was maybe 10 years before Toto and his Sisters. And now, another five years later, you are on two shortlists for an Academy Award. Is everything going to change from now on? Will it make everything easier?

Nanau: I don’t know. While I’m certainly happy to see how far Collective has made it and to know that it will reach so many more people than my other films, the truth is that whenever I start making a film, it always feels like the very first film. It gets easier to find people to trust in you and your work, but the challenge is always you and if you can come close to your own standards. Do you think this will ever change?

Kallas: No, I honestly don’t think it will, and maybe it’s a good thing that it won’t. My own professor, Frank Daniel, used to tell me once you feel you absolutely know how to do something, it’s time to move on. How many times a day do you doubt in yourself? I know I do it a lot.

Nanau: While making a film, so many times a day that it is hard to keep count. But I guess every solution that has to be found comes first as a doubt. After which you search until you lose the doubt. Doubting is also a constant part of my private life, for example, asking myself if I’m a good enough father or partner.

Kallas: And your characters doubt themselves, too.

Nanau: As do yours. I think it’s a sign of having authentic characters, don’t you think?

Nanau: Yes, your films and actors feel very real and authentic, in a way I’ve rarely seen in a fiction film. How do you achieve that?

Kallas: I work with my actors for almost a year before I start filming. It’s part of my process; I am studying them just as much as we both study their character. I feel like we can go deeper this way, touch upon frailties and intimate fears we wouldn’t have seen before. So I am asking these incredibly personal questions; I am asking them to really open up in front of us. And I keep pushing till this happens by opening myself up. Because there’s a lot of trust that needs to happen. A lot of truth that needs to happen. Ultimately, we’re looking at the human condition.

Nanau: Yes, that’s great! In the end, what we capture through a lens are the relationships we have built. I also think that what I am filming carries the whole complex relationship between me and the people I follow for so many months.

Kallas: I like that. I never thought of it that way.

Nanau: As for the systemic failures: For me, it is a question of how societies shape characters, and how characters resist that and manage to stay true to themselves and so shape their surroundings and, ultimately, society. Which is, I guess, what immigrants always think about.

Kallas: I always feel that being a permanent immigrant allows me to observe things I would not be able to see otherwise. And I’m curious. I have this desire to understand. For instance, in The Rainbow Experiment, I wanted to understand how people can perceive the same traumatic incident in completely different ways and why they end up blaming each other. I think you also start with the desire to understand …

Nanau: Yes. In Collective, I wanted to understand better how power works. The power of a system over people that it has crushed. From there on, I tried to find the right way to tell an observational story about that power and realized that it could be through the journalists who are investigating the powerful. Then it was the challenge of diving as deep as possible into a newsroom and telling the most intimate fears and personal challenges of journalists. It is strange, because when I am looking for real-life characters that inspire me, it is always about entering worlds in where I have no clue if there will be a story for a film or not. In the end, I feel it is better for me to not understand exactly what I am doing because in the moments of making the film, shooting feels like a natural thing that is just happening in a certain way.

Kallas: And still, you film scenes that are set up as if you had written them. No one speaks directly to the camera, they talk with each other as if you were not in the room and they are not being filmed, much like we do in a fiction film. You’re a fly on the wall. But how do you push them to dig a little bit deeper emotionally? Do you talk with them between takes? Do you stop and restart? 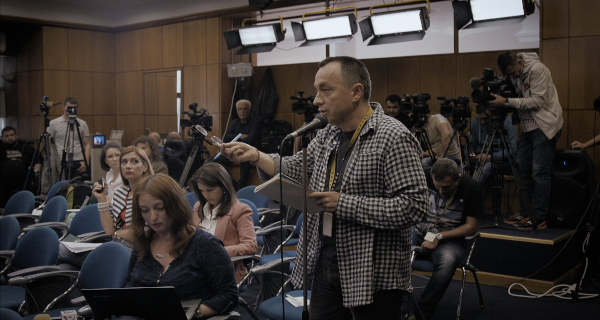 Catalin Tolontan in Alexander Nanau’s Collective.Nanau: I never set things up. I work by the pure standards of observational filmmaking. I don’t think there is much of a difference at the core between directing fiction and filming observational docs. It all has to do with how one builds a relationship, be it with an actor or with a real-life person. As you said, if people feel secure and not judged, they open up and are themselves. It is similar to a relationship with a love partner who allows you to be yourself. Where you don’t have to pretend anything.

Kallas: So, I was rewatching Broadcast News the other day. Do you remember James L. Brooks film?

Nanau: I do remember it.

Kallas: There’s a scene where William Hurt’s character runs the camera again to capture a moment when he reacted by crying, which wasn’t captured, since it was a one-camera shoot. Were there moments like that in your shoot? And if not, how was it possible to capture so many emotions without ever feeling that your protagonists were performing?

Nanau: Never. What is lost is lost, and it stays in memory like a scar. But then, you get lucky and capture some other incredible emotional moment you wouldn’t have imagined. These are the kicks and pains of observational filmmaking.

Kallas: Cinema as the art of reality. This reminds me of that quote from The Velveteen Rabbit: “Real is a thing that happens to you.” And then it goes on like that: “Once you are Real, you can’t be ugly, except to people who don’t understand.”

Kallas: Let’s talk about belonging. We both have no home, really, or maybe we have several homes, instead of just one — and several nationalities, it seems. Do you feel like you belong? For instance, to the Romanian New Wave?

Nanau: The only feeling of belonging I have is linked to my own family, my kids and partner. Wherever we are together, I feel complete. I lost any sense of belonging to a place or a country when I became an immigrant at the age of 10. I don’t feel Romanian or German. In a strange way, I feel neither. The Romanian New Wave filmmakers were shaped by very different life experiences. They were in Romania in the ’90s, when I was in Germany, having to learn to navigate the German society as an outsider. Plus, they are almost 10 years older than me. What I like about being an immigrant who is not biased by belonging anywhere is that one really feels that identity is nothing more than the sum of one’s life experiences and the marks they have left on you.

Kallas: I like that about being an immigrant too. But I also find that you are in a sustained state of longing, of wanting to be everywhere and with everyone all at the same time. And you are a different person in every language. For me, cinema is the only language where I can have all my parts together.

Christina Kallas is the New York-based writer-director of critically acclaimed ensemble dramas The Rainbow Experiment and 42 Seconds of Happiness and the writer of the John Hurt-starring, Golden Berlin Bear-nominated political thriller The Commissioner. Her prior credits include BBC Films’ hooligan drama, I.D., Toronto and Berlin selection hybrid narrative-doc Mothers, and European TV series hits, Edel & Starck and Danni Lowinski. Kallas is also known as author of books such as Creative Screenwriting: Understanding Emotional Structure and Inside the Writers’ Room. She was the President of the FSE, the European equivalent of the Writers Guild of America, for eight years and is a member of the European Film Academy, the German Film Academy and of the New York chapter of Film Fatales. 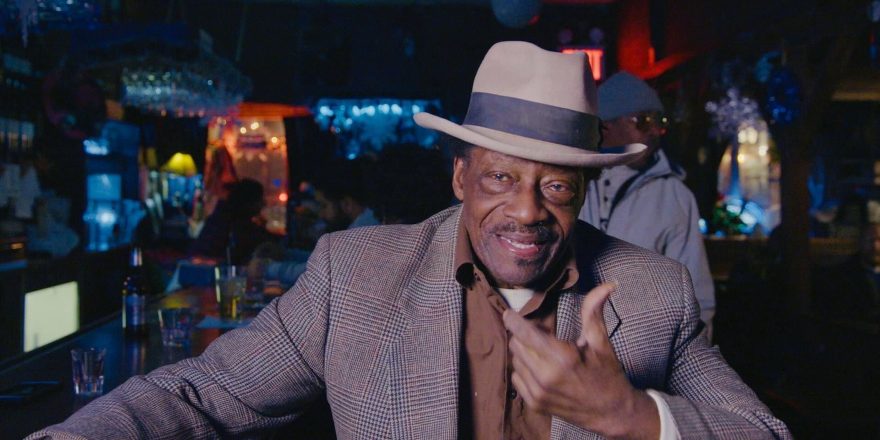 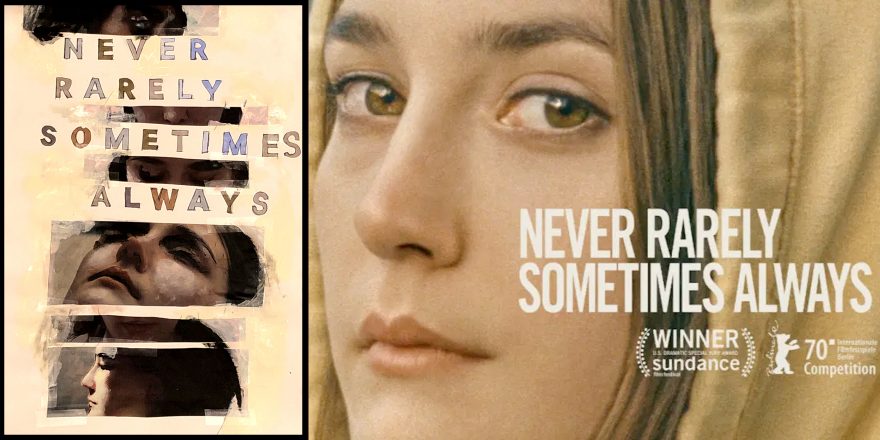 The 2020 Talkies: Talkhouse Film Contributors’ Top Films of the Year 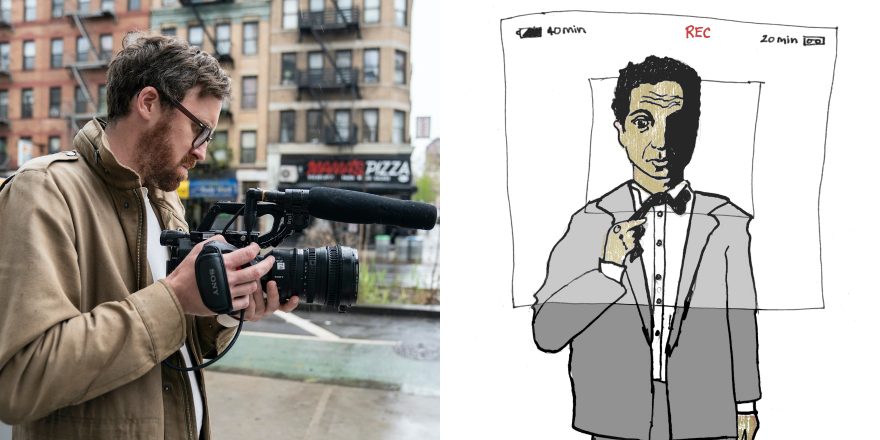 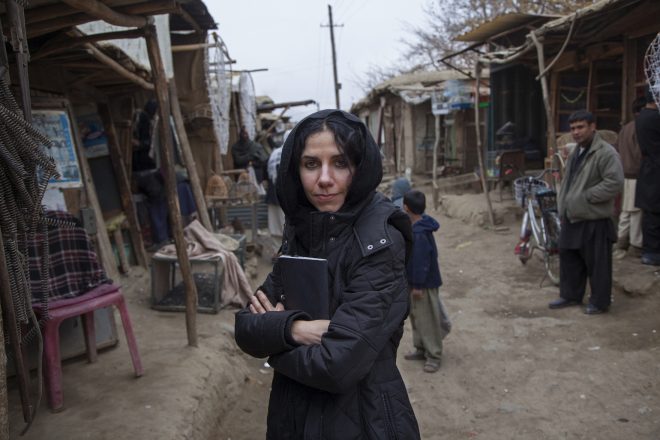 On the Road with House of Homeland