Haley Blais is a Vancouver based singer-songwriter/musician. She’s been DIY-ing it since 2014, turning out song after song of defiant scream-into-your-pillow bedroom pop anthems. Since the success of her 2018 EP Let Yourself Go, Haley has organically earned a considerable online reputation for her self-deprecating, self-loving balladry sung out in operatic crescendos. 2020 sees the release of highly awaited debut Below the Salt via Tiny Kingdom Music.

Just before the release of their debut album, Doohickey Cubicle spoke with one of the set’s collaborators, Haley Blais. Don’t Fix Anything is out now.
—Josh Modell

Haley Blais: It is so comfortable.

Alli: Do you miss it? Do you regret selling it to us?

Haley: Sitting down I was thinking that I don’t remember it being this comfortable. Do you guys hate it? You probably want to give it back right?

Alli: Do you ever trip out thinking about absorbing things that end up fueling your own ideas? I sometimes go crazy thinking about authenticity and how much, with music and stuff, is just an emulation of something else.

Francis: Absorbing then repackaging it and then saying it or posting it.

Haley: I don’t think anything is original anymore. We’ve absorbed too much. I was thinking about this recently because I was with Alma [Haley’s niece] and I was thinking about how much she absorbs as a baby, not just music or anything, but she’ll hear us say something and she doesn’t react and then four hours later she’ll say it.

Haley: A lot of swearing. The other day we were eating dinner and she looked up to the ceiling and went, “What fricken dude is that up there?”

Francis: Was it a ghost?

Haley: We didn’t even touch on that, we were just like, “Where did she learn that?” No one has ever said “fricken,” they’ve said the actual word. So where’d she learn the slang? “I know I’m a little baby so I will just say ‘fricken’.” Then later in bed I was like, Oh, she saw a ghost also and we didn’t even notice.

Alli: Ya, it’s just a toddler version of what we do.

Haley: You just reproduce everything you hear. If you’re songwriting or something, I think we all just need to accept that we’re not going to have this authentic perfect song, it’s going to be tiny snippets of everything we’ve heard.

Alli: And a reflection of what you’re listening to at the time.

Haley: Yeah, and just accept that that’s your version of it. As long as you’re not strictly stealing shit. There’s so much content out there and if we like it, it’s going to influence us.

Alli: I just freak out about the emulation stuff and delete Instagram for a week. Right now I am in that phase, where I’ve deleted it and then I will have to download it again when we’re releasing a song since it’s a free way to share our music as an independent band. It feels like you have to be on social media, it’s a weird pressure.
Haley: When does the album drop?

Francis: March 12. And we have a remix coming out the Wednesday before.

Alli: A Blue Hawaii remix! For “Sign Here,” which is the song you sang on.

Alli: I was thinking about when you came here to record that song.

Haley: When was that? Eight years ago?

Francis: There wasn’t a pandemic.

Alli: One of my favorite parts is the “ha ha ha ha ha” and that was you who thought of it.

When did you release Below the Salt again?

Haley: On my birthday last year. Or maybe 10 years ago. Mentally and emotionally it feels like many years ago. It’s so weird how easily you can move on from a project. It’s going to be an un-toured album, essentially.

Alli: Talking about touring and shows right now is making my stomach cramp.

Haley: I feel nothing. I don’t know why! I do miss playing shows. It’s fun being able to make music and there’s no pressure to showcase. It’s kind of more sacred.

Alli: I haven’t been feeling creative. The album was written before the pandemic, but if it wasn’t and we were trying to write, I don’t know…

Francis: Yeah, our heads are in a certain space right now.

Haley: Does it feel interesting to have sat on this album for a while? Well not sitting, but you’ve been simmering with this release.

Alli: All the songs were written over the span of a couple years and at different times. It was simmering in a sense, but Francis has been mixing it up until the last minute.

Francis: I don’t know if that’s always the best way. There’s so much value to hiring someone to have that other perspective.

Alli: But you love editing!

Haley: The leak in the roof stopped!

Alli: I am so scared it’s going to just cave in. One time our cat Audrey, rest in peace, was sitting on the counter and all of a sudden the roof started to leak right on her head. What are the chances?!

Francis: Sort of like that time we hung that dream catcher that Alli’s sister-in-law made us, and as we put it up and were standing underneath it, an earthquake happened.

Haley: What? That scares me. I’m so scared of that.
Alli: Are you someone who thinks about “the big one”?

Haley: Weirdly I started thinking about it last night..

Alli: I’m listening to a book right now called No Death No Fear, it’s based on Buddhist teachings around death, which you should listen to because you sound fearful. As am I.

Haley: I’m so fearful of death. We could die at any moment. Like, this mic stand could tip over, knock the glass, it hits that, then electric shock!

Alli: Haha! But this book is about how you can live without fear if you understand that there’s no birth and no death. We’re just in our current manifestation. You can’t create something from nothing so you were never “born.” We’re a continuation of our parents, etc. I don’t know, I like thinking about that.

Haley: I like that, too, because sometimes I think I’m a narcissist and like to think that I will live forever. This book is good news because I do walk into a room and think, “How can I die here?”
Alli: They say that’s the way that western society thinks about death: not at all or in fear of it. But if you think about it often and become comfortable with the idea of it, you’ll live differently. Less short sighted, more conscious.

Francis: Did you watch that Soul movie? If I watched that as a kid I would have had a different perspective.

Alli: I grew up Catholic so you learn you are going to heaven or hell. It’s easy, you don’t have to ponder it too much. Then at a certain age you’re like…

Haley: I grew up with no religion, so no sense of death. We’re just here. We didn’t talk about what it was or what happens when you die.

Alli: So how did you think about it then?

Haley: I just didn’t think about it. I don’t think I ever thought about dying. So now I’m more scared because I never processed it. I should look into it more.

Alli: What are the themes in the new songs you’re writing?

Haley: It’s sort of about the dissolution of a family. My family. My experiences with divorce, and how one family ends and another one starts. What even is a family? What’s marriage? What’s love? What’s being a daughter or a mother?

Francis: My parents divorced when I was around six and I was the only child for the first 11 years of my life. I would have eaten up any content that was something I could relate to.

Alli: It’ll be easy. I’ve always wanted to transcribe a piece of audio.

Haley: We talked about music for two seconds and death for two hours.

Francis: What are some artists that you’re into at the moment?

Haley: I wake up every morning, for the last week or two weeks, with a Taylor Swift song in my head. I’ve been indulging in her old stuff, and I wake up singing “and I’ll go back to December all the time.” Then I walk around all moody like, “turns out freedom ain’t nothin’ but missin’ you,” pour my coffee “wishin’ I realized what I had when you were mine.” I don’t know why, I am obsessed with old Taylor Swift. I need some new music.

Alli: I love that… for you. I really love Eliza Niemi, she’s in Toronto. I love her music and I have a feeling she’s brewing up something new. Salami Rose Joe Louis is amazing.
Francis: I have to mention that Crumb album Jinx. Oh, and Beverly Glenn-Copeland.

Alli: I feel like Beverly Glenn-Copeland kind of saved us during the first lockdown.

Francis: Keyboard Fantasies brought us to a calm place.

Alli: And Bernice, we love Bernice. They just released an incredible album.

Haley: I’ve been in a huge ’90s revival also. Anyone who could’ve been at Lilith Fair at any point. Alanis Morrissette, Sheryl Crow, Dido. I feel like all that music truly shaped me. I love that era of singer-songwriters.

Alli: I listened to that stuff, but I was more into… Francis was away recently and I did karaoke alone, and was singing Aaliyah, Ashanti, Mariah Carey. They shaped me.

Haley: OK, we covered a lot.

Francis: Yeah! It was fun to chat. I’ll go see if it was actually recording.

Haley Blais is a Vancouver based singer-songwriter/musician. She’s been DIY-ing it since 2014, turning out song after song of defiant scream-into-your-pillow bedroom pop anthems. Since the success of her 2018 EP Let Yourself Go, Haley has organically earned a considerable online reputation for her self-deprecating, self-loving balladry sung out in operatic crescendos. 2020 sees the release of highly awaited debut Below the Salt via Tiny Kingdom Music. 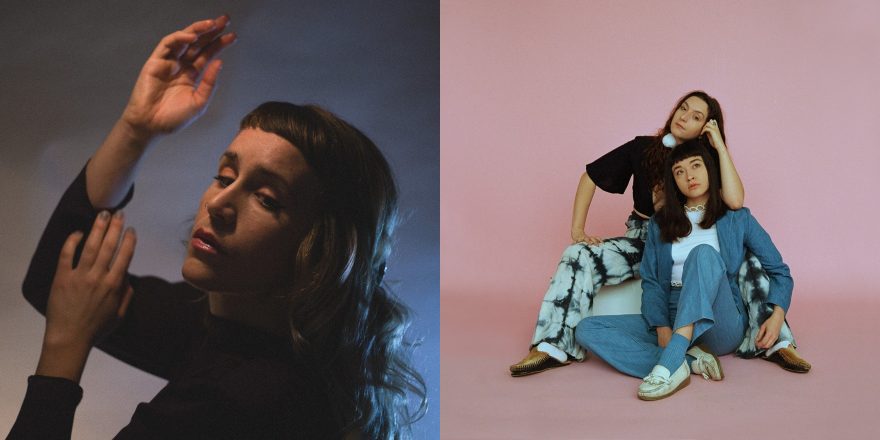 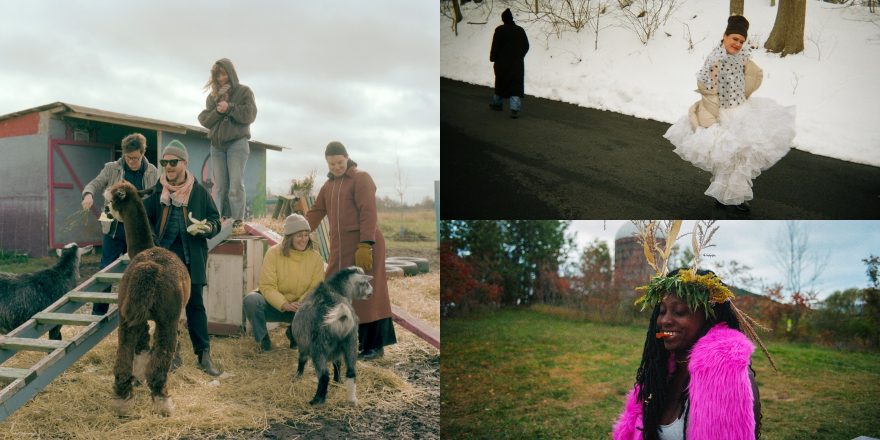 Explore the World of Rot with Bernice and Kalbells 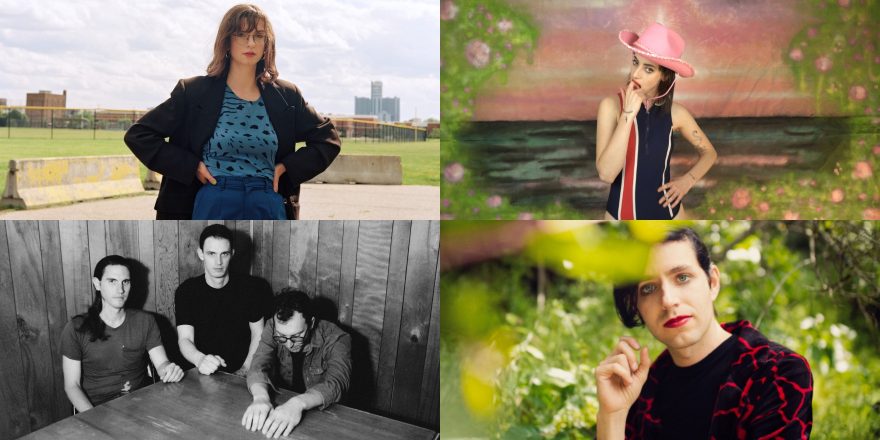