“[Chasing Shadows] is a very serious novel about the military industrial complex and the various parts within the [U.S. Department of Defense] that have had to deal with extraordinary events.”
— Tom DeLonge

The massive effect Blink-182 had on the teen/tween years of my friends, the pop-punk music scene and my own personal quest for writing super-catchy songs is undeniable. And while bassist Mark Hoppus (the one with the pointy hair) has stayed surprisingly relevant in my own punk music scene (Hoppus is in a cover band with my friend Ali from the Upset and recently produced the new album for amazing Glasgow pals’ band PAWS), the rest of the band has not. So when I heard former Blink guitarist/vocalist Tom DeLonge had written a UFO conspiracy theory novel, I jumped at the chance to read it.

There have been a lot of rumors as to why DeLonge left Blink-182, so it’s reassuring to witness him refocusing on his newer passionate endeavor, his media company To the Stars. Most recently, he released a 704-page novel titled Chasing Shadows — the first in a series of books, documentaries and other media titled Sekret Machines — accompanied by a four-song EP by DeLonge’s (coughlessercough) prog-punk band, Angels and Airwaves. You had to admire the fact that DeLonge can go from playing “All the Small Things” to an audience of thousands to releasing this ambitious multimedia novel/record combo. I’m a major sucker for concept albums one hundred percent of the time. I love the idea of this whole thing: a great ’90s pop punk icon delving into sci-fi AND making theme music to go along with the whole thing. Amazing, right?

Here is the bummer: the book deals way more with unidentified aerial phenomena than bitchin’ alien characters — at least in book one.

Although presented as a novel, DeLonge makes it very clear in interviews and on the book jacket that Chasing Shadows is based on true events, using fictional characters as devices to convey his personal investigations into UFO phenomena.

“This is not just Tom talking about UFOs again, laughing about it with his fans,” he told EW. “This is Tom representing ten people that are of the highest rank and office within the Department of Defense establishment and they are asking me to communicate something that they see as the utmost national security issue that has ever existed. They see it as a global security issue.”

Also — although the story is all rooted in the imagination of Tom DeLonge — his co-writer A.J. Hartley (perhaps the person largely responsible for the novel’s readability?) is described as a skeptical British Shakespeare professor who has little experience with the subject matter. And although it gives a few nods to what is described as the “tin foil hat crowd,” the book keeps its dealings with the paranormal pretty clinical and dry…at least in book one.

The book’s long, windy road begins by following a fighter pilot in Central Afghanistan (although it also deals largely with World War II) and continues with a series of characters who take up the narration chapter by chapter. There are four key players that you need to know:

Jennifer: A super-liberal heiress who does charity work in Africa. After her estranged dad dies, she assumes his Illuminati-esque role across his business interests and soon discovers that his death was totally a conspiracy that she must somehow unlock.

The fighter pilot: Unfortunately, those chapters made me ultra-bored, as they are full of descriptions of the inner workings of secret planes. SPOILER: Later on, he and Jennifer have some possible romantic sparks.

Jerzy: A former Jewish concentration camp prisoner turned Nazi hunter. After Jerzy’s brother is mercilessly shot down in the camp, he ends up tracking Nazis from the jungles of South America to the depths of Antarctica. Turns out, combining Nazis and UFO technology is a winning literary combination!

Timika Mars: A modern-day conspiracy-theory debunker, determined to get to the bottom of things.

The last quarter of the book really picks up — to a more appealing ’90s action movie speed — and the characters that take so long to get to know finally start to intertwine their stories. (Is it a crime to say that I wanted DeLonge to sneak in some sly music references?? Maybe while describing a secret aerial craft he could have cleverly popped in a funny anecdote about the 2000 MTV Video Music Awards?)

After reading the book, I listened to the accompanying Angels and Airways EP. Admittedly, I never liked Angels and Airwaves anywhere as much as I love Blink-182, but I am such a sucker for an intertwined project, so I enjoyed trying to draw parallels between the lyrics and book. The lyrics are vague enough that they could be about love or work — or whatever else Angels and Airwaves write songs about. The EP gives a nod to the “early days of Angels and Airwaves,” according to DeLonge, but it’s also full of dark, fast melodic songs that feel more directly related to the book.

One thing crossed my mind by the end of the novel: did DeLonge orchestrate a 704-page, dense-as-fuck UFO book to offset or compensate for the light-hearted, short bubblegum punk songs of his youth? Just as the dark prog-punk of Angels and Airwaves gets as far as possible from the lightheartedness of Blink-182, Sekret Machines explores the possibilities of the unknown with dense, heavy feels.

All right, maybe not.

All in all, the first book of DeLonge’s Sekret Machines series is a beautiful, ambitious project that, while a really cool idea, unfortunately doesn’t quite live up to its promise. 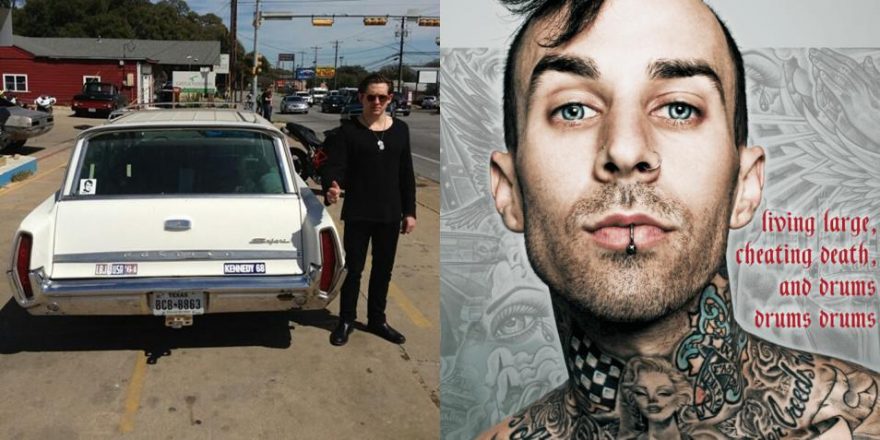 An Excerpt from NOFX: The Hepatitis Bathtub and Other Stories by NOFX and Jeff Alulis

An Excerpt from the Memoir Dark Days by D. Randall “Randy” Blythe (Lamb of God)